KU School of Nursing alumna Barb Geiger has carved out an impressive career as a consultant to biotech and biopharma companies. 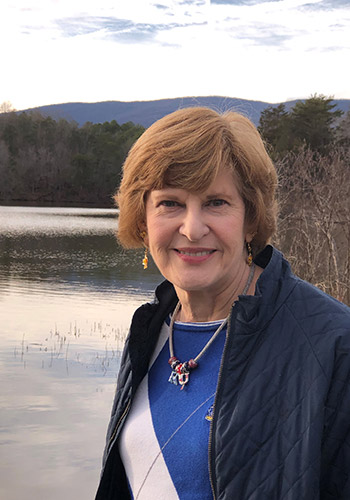 KU School of Nursing alumna Barb Geiger has carved out an impressive career as a consultant to biotech and biopharma companies, helping to guide them through the byzantine process of developing clinical trials designed to discover lifesaving compounds and therapies.

Geiger grew up in Overland Park, Kansas. As a student at the University of Kansas, she had considered a career in medicine and even took some basic sciences at the KU School of Medicine. But Geiger eventually decided the field of nursing appealed to her more, and she was accepted at the KU School of Nursing. Geiger said she had a wonderful experience in nursing school.

“My instructors and professors were so knowledgeable and helpful and allowed us to pursue our interests while still making sure we learned the basics,” Geiger said.

“I tend to be very detail-oriented, so I would often delve more deeply into pathology and other subjects that were not necessarily part of the nursing curriculum.”

During her time in nursing school, Geiger began to realize her nursing career might be a bit off the traditional path. As a nursing student, she worked shifts on the pediatric oncology floor at The University of Kansas Hospital.

“I just love numbers and data and would often memorize the lab reports of my patients,” Geiger said. “I would discuss lab status changes with the head of the pediatric oncology division, and he eventually asked if I wanted to attend clinical trial protocol meetings. This was life-changing for me.”

After earning her nursing degree, Geiger worked as a study nurse for a private research clinic conducting clinical trials, eventually moving on to Marion Laboratories and other companies. She has been managing clinical trials for her entire career, now as the head of her own consulting firm. She is working almost full-time with a cell therapy company where she leads their clinical operations and serves as their senior vice president for clinical operations.

“Having a nursing background has been extremely helpful in my career in clinical research, because it gave me an understanding of the patient journey, as well as how a clinical site works,” Geiger said. “That has helped me tremendously in implementing clinical trials and developing protocols that will be successfully conducted in the clinic setting.”