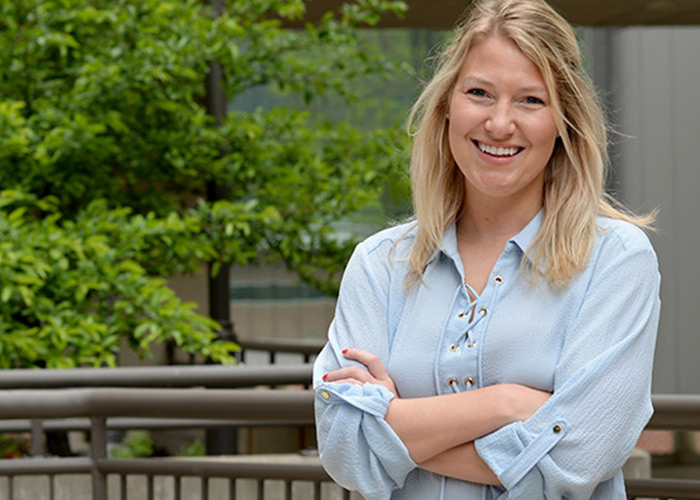 Jamie Franklin and her mother were running late for dinner while returning from the beach during a family vacation in Cancun, Mexico, last Thanksgiving when a chance walk past a resort pool took a nearly fatal turn. Thanks, however, to Franklin’s emergency training at the University of Kansas School of Nursing, the then-senior student was able to deliver CPR and save the life of a potential drowning victim.

“My mom and I started walking by the pool when both of us got quiet and had a non-verbal moment realizing ‘something is not right here,’” said Franklin, who is from Kansas City, Missouri, and attended Bishop Miege High School. “We saw a man pull a woman’s limp body out of the pool. My mom grabbed everything out of my hands, and I ran the rest of the way.”

“I knew just by looking at her that she didn’t have a pulse. I asked if anyone had medical training, but everyone just looked around. I surprised myself by how quickly and without hesitation I got down on the ground and started the code.”

“She was more purple than I realized a human could be. It looked like special effects from a movie. When I checked for a pulse, I was taken aback by how cold her skin was. That’s when I positioned my hands and started doing chest compressions.”

From there, Franklin says the life-saving effort became a blur with everything happening both at super speed and in slow motion at the same time. Her adrenaline was pumping so high that she can’t remember all the things that went through her head during the rescue effort.

“What I specifically remember thinking is ‘something is wrong, and I need to do everything possible I can do to help.’”

Franklin’s emergency training started well before she enrolled in nursing school. She had originally taken a first aid class during her earlier years at the KU campus in Lawrence, prior to attending the School of Nursing in Kansas City. She also had gone through CPR training as part of getting her certified nursing assistant’s license and had participated in biannual basic life-saving training.

Just weeks before the incident in Mexico, she had taken part in a Code Blue Simulation as part of her nursing training at KU Medical Center. Franklin ultimately credits that simulation training exercise for enabling her to respond to the real-life crisis situation without hesitation.

“After I started doing compressions, I noticed I was thinking about the details of CPR I had learned during our Code Blue Simulation,” she said. “I was impressed with the muscle memory I had retained from that training.”

But even with all the preparation and training, little could fully prepare her to face a life-and-death situation in real life.

“Nothing can prepare you for the realization that a real human life is at stake,” she said. “The adrenaline rush is like nothing I have ever experienced, but it is so important to know that we have been trained for this and have the ability to literally save a life. So be confident in yourself and your skills.”

Another thing she says simulation training can’t prepare a person for is the human body’s reaction to CPR, specifically the cracking of ribs, all the bodily fluids the person might cough up and the incontinence.

Complicating the difficult situation at poolside was the fact that the victim and her companion spoke only Spanish. Franklin used her limited knowledge of basic Spanish along with the help of a bystander who could translate to make the best of the situation. Fortunately, most of the group that gathered around spoke English and could respond to Franklin’s directions when she asked if oxygen and an automated external defibrillator (AED) were available.

As the sunlight began to quickly fade, the group pulled up flashlight apps on their cellphones and shone them on Franklin so she could see to do her work. Finally, after what seemed to Franklin like an eternity, the woman coughed up water, mucous and a small amount of blood. A lifeguard eventually appeared with oxygen shortly after much of the immediate crisis had passed, and no AED ever materialized.

To further complicate matters, when the EMT’s arrived, they did not speak English either. This added yet another layer of difficulty to the transition of care for the woman, who was quickly taken to the hospital for further treatment.

“When everything had settled, and the woman was being taken to the hospital, I had to sit down because I thought I was going to pass out,” Franklin said. “I had done CPR longer than one normally should, and the adrenaline had just worn off.”

“My mom gave me a big hug, and I got emotional. So many people thanked me, which really confused me at the time because I felt like I had just done what I was supposed to do and didn’t deserve recognition.”

With the crisis passed and life returning to normal, Franklin and her mother caught their breath, gathered themselves and headed to find the rest of their group that included aunts, uncles, cousins and grandparents. Mother and daughter carried with them the memories of a fantastically courageous adventure, and an excellent excuse for being late for the family dinner.

Franklin heard a few days later that the woman was recovering in the hospital. She later heard that the woman was sitting up, conscious and speaking. Because she and her extended family were on vacation, there is little chance Franklin and the woman will ever cross paths again. That doesn’t mean, however, that each woman won’t be forever changed by their chance meeting in Mexico.

“After this experience have never felt more confident in my decision to go into the nursing profession,” said Franklin, who began working in the emergency department at The University of Kansas Hospital after she graduated last May.

“I am extremely proud and honestly kind of surprised how well I handled the first real-life code I’ve ever been involved in. It turns out urgency and emergency are definitely my cup of tea.”