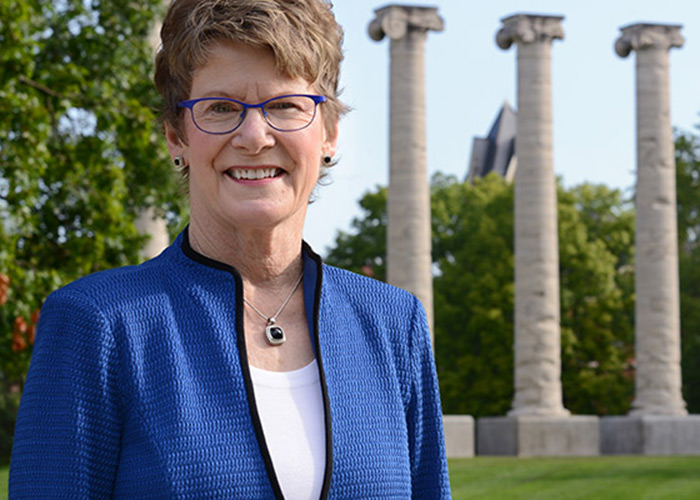 Sarah Thompson, Ph.D., RN, FAAN, is now well into her second year as the dean of the Sinclair School of Nursing at the University of Missouri in Columbia, Missouri. Thompson joined the school in August 2018 and said she had an exhilarating first year at the school.

“It has been amazing to experience the comprehensive nature of the campus in Columbia when it comes to health care,” Thompson said. “The Sinclair School leads the nation in aging-in-place models and the promotion of quality nursing home care, which is a passion of mine.”

Thompson grew up in Oklahoma. She had several doctors in her family, but she didn’t want to be a physician. Instead, she was drawn to nursing. She earned her BA in nursing at the University of Oklahoma and worked for 12 years as a pediatric ICU nurse and then as a hospice nurse. She then decided she wanted to advance her career and was accepted at the KU School of Nursing to work towards her master’s and doctorate degrees.

“It was while I was attending the KU School of Nursing that I discovered the increasingly important role research was playing in the field of nursing,” Thompson said. “I loved being a practicing nurse, but I saw research as yet another path to caring for patients.”

After earning her advanced degrees, Thompson stayed in Kansas City for nearly 10 years as a member of the KU School of Nursing faculty, where she honed her interests in gerontology and public health. In 2006, she was recruited by one of her mentors to become an associate dean of nursing at the University of Nebraska. After six years there, she took a position as dean of the College of Nursing at the University of Colorado. She remained there until accepting the dean’s job at Mizzou.

Thompson said a few of her colleagues at Mizzou have joked with her about being a Jayhawk alum.

“I just tell them that KU and Mizzou are both great schools and leave it at that!” Thompson laughed. “But I’m grateful I got such a great education at the KU School of Nursing, and it prepared me for the career I have today. I am still proud of being a Jayhawk.”