Dr. Barnett completed his BA in Biology at University of the Cumberlands in Kentucky, then went on to complete his MS in Biotechnology at Johns Hopkins University in Maryland. He returned to the foothills of Eastern KY for medical school at Kentucky College of Osteopathic Medicine. He hopes to pursue a fellowship in Cancer Rehabilitation. Outside of work he likes to watch a lot of TV (no shame), read science fiction, and play tennis. He adopted a pandemic cat and would love to tell you all about him.

Dr. Murphy was born and raised in Kansas City. He completed his undergraduate education at Creighton University before attending medical school at the University of Kansas School of Medicine. Following graduation in May 2018, he married his beautiful wife, Stephanie, and proceeded to move to Indianapolis, IN for his internship at St. Vincent Hospital. Dr. Murphy then returned home to KC for his advanced program in PM&R at KU. He is currently pursuing fellowship opportunities in either Pain Medicine or Musculoskeletal/Interventional Spine. He enjoys spending time with family and friends, exercising, and watching sports during his free time.

Dr. Tran was born in Orange County, CA and moved to Oklahoma City, OK at a young age where he was raised. He is a graduate of the University of Oklahoma where he received his BS in Microbiology. He obtained his medical degree from Oklahoma State College of Medicine. Within PM&R, he is interested in MSK/Spine as well as general mixed inpatient/outpatient rehab. Outside of medicine. Dr. Tran exercises regularly, watches sports (Boomer Sooner and ThunderUp!), and is an avid basketball player. He also has an appreciation for style, cuisine, and culture and loves to travel for these experiences.

Dr. Weninger is from Slinger, WI and graduated from Slinger High (2010). He is an alumnus of the University of Wisconsin-Madison (2014), received his MD from the Medical College of Wisconsin (2018), and completed an Internship in Internal Medicine at KU Medical Center (2019). Dr. Weninger is interested in general physiatry and physician entrepreneurship. He is a husband to his wife, Becca, and father to his son, Cam.

Dr. Blough was born in central Kansas and spent time growing up in rural upstate New York, the South Bronx, and Hong Kong before returning to Kansas for college. She graduated from Bethel College with a BA in Psychology and then attained a Master's in Social Work from the University of Kansas. Prior to returning to the University of Kansas to pursue her pre-medicine coursework and then her medical degree, she worked for several years as a Crisis Mental Health Therapist. Within PM&R, as in her prior career in Social Work, she finds enjoyment in forging meaningful relationships with patients and in practicing medicine aimed at enhancing quality of life for those she serves. Her interests include general PM&R in an inpatient and outpatient setting and Cancer Rehabilitation. Outside of medicine, she enjoys gardening, estate sales, cooking, soap making, and spending time outdoors with her husband, Justin, and their Australian Shepherd, Violet May.

Dr. Francio has Brazilian-Italian heritage and he was born and raised in Bento Goncalves-RS, Brazil. After graduating from Feevale University in Brazil, he immigrated to the US to work and continue his education with a MS in Clinical Sciences and a Doctor of Chiropractic (DC) degree. Dr. Francio spent the next few years working in musculoskeletal and spine care for a few years within the VA Hospital System, community health care centers, and in a multidisciplinary spine center alongside physicians, surgeons, and therapists. He then decided to advance his training and graduated with an MD from USAT College of Medicine. He completed his PGY1 internship at St. Anthony Hospital in Oklahoma City and, considering his background in spine and MSK care, PM&R was the perfect medical specialty to choose. His interests include neuromodulation, interventional pain medicine, regenerative medicine, clinical research, academics, and medical education. Outside medicine, he enjoys watching and playing soccer, listening to his classic rock vinyl collection, playing guitar and drums, reading, and traveling with his wife. Dr. Francio speaks three languages (Portuguese, Spanish, and English), four if you count bad words in Italian. He used to be the lead singer in a rock band before moving to the US.

Dr. Lambeth was born in Florida and moved to Branson, MO at age 7, where she spent most of her growing up years. She attended William Jewell College in Liberty, MO, where she earned a BS in Biochemistry, and did research related to a type of brain cancer. She received her medical education at Kansas City University of Medicine and Biosciences and participated in research related to Parkinson's disease. She completed a Pediatrics Residency (training in general pediatrics) at the University of Missouri in Columbia, MO. She is now continuing training in Rehabilitation Medicine at the University of Kansas and hopes to work with children and adults recovering from brain injuries, battling chronic pain, and other neurological and musculoskeletal disorders. In her free times, she enjoys spending time with her husband, friends and family, admiring works of art at the Nelson-Atkins, reading a good book, or eating some delicious KC barbeque.

Dr. Polston is from Nashville, TN. He earned his bachelor's degree from Vanderbilt University, where he majored in Neuroscience and Medicine, Health, and Society. He then attended Tulane University, where he earned a master's degree in Human Genetics. After that, he completed medical school at the University of Tennessee and his PGY1 internship at KU. Outside of work, he enjoys, running, fishing, triathlons, being outdoors, and spending time with his fiancé, Logan, and their two dogs, Bailey and Juno. 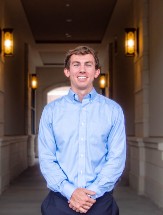 Dr. Hiett was born and raised in Leawood, Kansas and has been a Jayhawk his whole life. He received his undergraduate degree in Biochemistry from KU and then graduated from the University of Kansas School of Medicine in 2020. He spent his intern year in St. Louis before returning to Kansas City to complete his PM&R residency. He is most interested in sports medicine and hopes to work with athletes in some capacity in the future. In his free time, he enjoys watching Chiefs football, exercising, and spending time with friends and family. 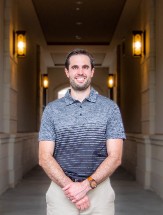 Dr. Rupp was born and raised in St. Cloud MN and completed his Bachelor of Science in Cell and Molecular Biology with a minor in Psychology at the University of Minnesota Duluth. He went on to complete his medical didactic years at A. T. Still University in Kirksville Missouri and his clinical years in Detroit Michigan. He completed his medical intern year at the University of Kansas Medical Center. His interests include interventional pain management and musculoskeletal/Interventional spine. Outside of medicine he enjoys spending time with his wife and dog, traveling the U.S., wood working, gardening, playing soccer and sailing. 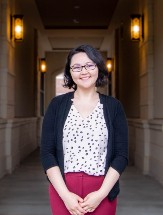 Dr. Sarmiento was born in Mongolia before moving to California at the age of 11. She obtained her bachelor's degree in Physiological Science at the University of California, Los Angeles. While there, she participated in research related to neuroanatomy of the learning and memory process utilizing Aplysia. She then attended Lake Erie College of Osteopathic Medicine in Florida where she obtained her medical degree. She completed her transitional year internship at HCA hospital system in Hudson, Florida. In physiatry, she is interested in general rehab and is looking forward to having more exposure to different subspecialties within the field! She loves working with her patients and seeing them achieve their goals. Outside medicine, her interests include traveling, spending time with her loved ones, reading, interior design, and fashion. 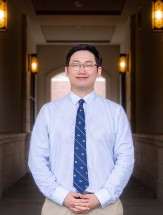 Born in South Korea, Dr. Yoon moved to the U.S. at an early age. He moved around the country a lot in his youth and lived in the Midwest for some time while he was at the University of Notre Dame for undergraduate studies. He attended medical school at the Royal College of Surgeons in Ireland and completed his internship at the Virginia Commonwealth University Hospital in general surgery. He came to KUMC for his love of the Midwest and to train at its historic PM&R program. He is interested in MSK/spine aspect of physiatry. He collects stamps, plays board games, and loves to bake in his free time.