The training, which was in the Simulation Center at KU School of Medicine-Wichita, counts as eight hours of continuing medical education and helps participants qualify for POCUS certification. 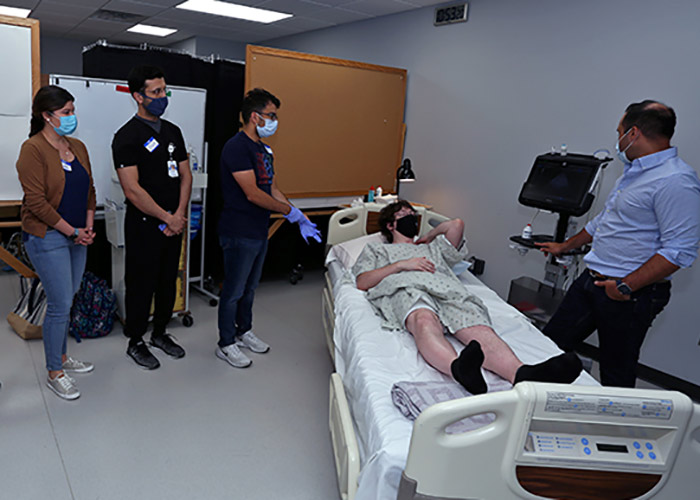 Jared Stabb, M.D., assistant professor in the Department of Anesthesiology at the University of Kansas Medical Center, taught a recent training in acute point-of-care ultrasound at KU School of Medicine-Wichita Simulation Center. The “patient,” Chris Schrage, is a standardized (trained) patient at the school. SPs help students build relationships in the exam room as well as demonstrate symptoms for various illnesses.

It's not unusual for physicians to find themselves in situations where they'd like to be able to make better, faster patient care decisions. Proponents of point-of-care ultrasound - POCUS for short - say it helps them do just that in many of those cases.

Sixteen physicians and one fourth-year medical student got training on the technology and technique behind POCUS at the Simulation Center at KU School of Medicine-Wichita earlier this month.

"It can answer big questions in a short period of time," said Joel Grigsby, M.D., one of two physicians from Kansas City who led the workshop.

The other KC physician, Jared Staab, D.O., M.A., told attendees it "doesn't take really long to get good" at POCUS. "Don't get discouraged. It's fun and it's the future."

Staab said physicians can become proficient with 25 to 50 experiences. POCUS can be used both in emergency settings, such as determining whether an appendix has burst, or on a routine basis, as when a cardiologist checks to make sure a heart valve is opening and closing properly after surgery.

Stabb and Grigsby, who serve as assistant professors in the Department of Anesthesiology at the University of Kansas Medical Center, taught in their capacity as recognized experts in acute care POCUS.

The participating physicians were a mix of hospitalists, critical care pulmonologists and pediatric intensivists. They completed a learning module before arrival and listened to talks by Staab and Grigsby but spent most of the day-long session in hands-on training. Breaking into two groups and working with standardized patients, they took turns using a full-size ultrasound machine and a Butterfly iQ+ probe, a hand-held device that connects to smart phones.

They spent the morning exploring the patients' chest cavities for images of the heart and lungs, then focused on the abdomens during the afternoon. They also practiced on Bob, the Simulation Center's medical manikin that can simulate some 600 pathologies.

"You could tell some of the folks that had some ultrasound experience before," said Erin Doyle, the Simulation Center's program director. "Others struggled with making sure how deep do you push the probe for which structure you are looking for. Peers were giving lots of input and feedback (like) ‘Hey, just tip it this way.'"

"To learn from professionals was incredible for me," said Bethany Peach, the KU Wichita medical student who took part. Peach, who plans to go into family medicine, had practiced using a hand-held probe on friends and classmates, but it was her first chance to work with standardized patients.

Eli Brumfield, D.O., FACP, the center's medical director who organized the event, said the workshop was a kind of refresher course for him even though he wasn't technically a participant. "I used (POCUS) quite a bit, for procedures, and then my career path just shifted a little bit. I'm getting more of my feet back under me with this."

"Making decisions at the point of care is enhanced by gathering more kinds of image-based examination findings that you didn't have before," Brumfield said. "It can tip your differentials from one to the other, so you don't delay care" in cases where emergency care is needed.

Busy physicians often don't have time to use or order the use of full-size ultrasound machines, he noted, but "the availability of the (hand-held) probe just being in your pocket makes it more likely you'll use it."

The Simulation Center obtained its full-size ultrasound machine this spring. While it offers features that hand-held probes don't, it's also in very limited supply in hospitals.

"Its touch screen is pretty state-of-the-art with probes to scan any part of the body," Doyle said. "But the problem is, they're very expensive, so having access and being able to get them to patients' bedsides is sometimes a challenge."

Staab noted that physicians can bill for POCUS, although currently no physicians employed by KU School Medicine are doing so. If they did, it would be billed to insurance as part of assessment and care provided at the time of service. POCUS is more commonly used on the coasts than in the Midwest, Staab said.

The workshop, delayed for over a year by the pandemic, was funded by a grant from the Earl F. Mills Educational Trust. It counted as eight hours of continuing medical education and will help workshop participants qualify for POCUS certification if they want to pursue that, Doyle said.

Brumfield agreed with Staab and Grigsby that POCUS should play a bigger role here in health care's future.

"We should be doing it now," he said.