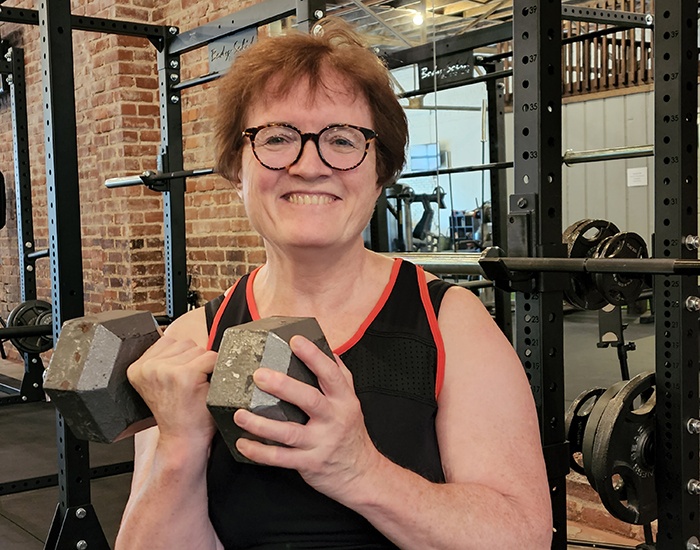 Rachel Brown, MBBS, MPhil, chair of the Department of Psychiatry & Behavioral Sciences at KU School of Medicine-Wichita, has also found success as a competitive powerlifter.

And she’s got some records to prove it.

Brown, chair of the Department of Psychiatry & Behavioral Sciences at KU School of Medicine-Wichita, is not only one of the area’s few fellowship-trained child and adolescent psychiatrists but also a competitive powerlifter.

Brown recently competed in USA Powerlifting’s Kansas state meet Dec. 10 in Wichita, where she set state records in her weight and age class in bench press with a lift of 132 pounds and in deadlift with a lift of 292 pounds. She also set a total record, which is a compilation of a competitor’s best lifts in bench press, deadlift and squat. In the latter, Brown lifted a total of 276 pounds.

Brown, who turns 66 in January, was a later-in-life entrant into competitive powerlifting.

She was 57 and an administrator with the University of Missouri’s medical school when she joined a group of women lifters in Columbia, Missouri.

In 2018, Brown moved to Wichita to join the KU School of Medicine-Wichita faculty. The December competition was just the third one she’s entered since moving to Kansas, although she’s continued to lift for the health benefits.

She progressed from playing field hockey as a teen growing up in the United Kingdom to working out with Jane Fonda aerobics videos to taking martial arts classes in her 30s. By her early 50s, she’d earned two black belts.

After putting in 50 hours a week or more as an administrator and seeing patients, Brown is happy to leave the heavy lifting of creating her workout sessions to a trainer. She lifts and works out at least twice a week.

Brown modestly downplays the fact she holds Kansas powerlifting records for her age and weight class, noting there were no existing records in those categories.

But there is still a sense of pride in being able to do what she does.

“Most women my age aren’t expected to be strong so it’s very satisfying,” said Brown.

“Most of my successes are on the professional level so it’s nice to have something else I love that I’m good at,” she added.

Brown said she is considering competing in another meet in May being arranged by Kate Jones, state chair for USA Powerlifting, who organized the December meet.

When asked what one does after finishing a competition and before training starts for another one, Brown quipped, “You get to eat a bit more chocolate.”

Part of this story appeared in the December 2022 issue of The Active Age.