Teamwork began in the dugout, continues in medical field 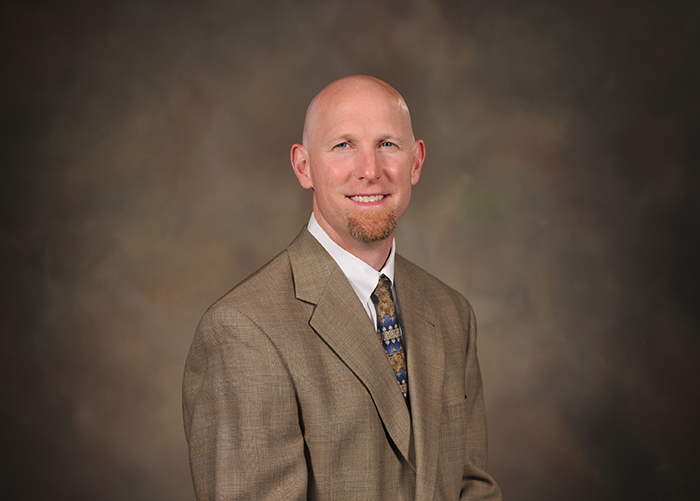 As the child of two teachers, James Walker Jr., M.D., always knew the importance of education. But school wasn’t his focus, and his parents knew it.

“My goal was to be a professional baseball player,” Walker said. “Everything I did was centered around baseball.”

Walker pitched three seasons in the minor leagues after a standout career at the University of Kansas. When a shoulder injury derailed his baseball career, he turned to medicine with a similar single-mindedness. Walker, who directs KU School of Medicine-Wichita’s anesthesiology residency program, said his sports background helped him make the transition.

“I played for a very demanding coach in college,” he said. “Between having my dad as a coach and Coach (Dave) Bingham at KU, I developed a lot of mental toughness that I think helped me navigate medical school.”

Walker grew up in Nickerson, Kansas, playing on baseball and basketball teams that won state championships during his senior year in high school. He received a scholarship offer from Bingham, who’d coached in the Olympics, to play baseball at the University of Kansas.

“KU wasn’t very good at the time, but I wanted to take a chance and see if we could turn something around there.”

In 1993, his senior year, KU reached the College World Series for the only time in school history while also compiling the program’s best win-loss record. He was drafted by the Baltimore Orioles in the third round — still one of the KU baseball program’s highest picks — and spent his first season with the team’s minor league affiliate in Albany, Georgia. He got invited to the Orioles’ big-league spring training camp the next year but didn’t make the roster and spent his second season with their minor league team in Frederick, Maryland. One ballpark he played in was home to the Durham, North Carolina., Bulls, made famous in the hit movie “Bull Durham.” 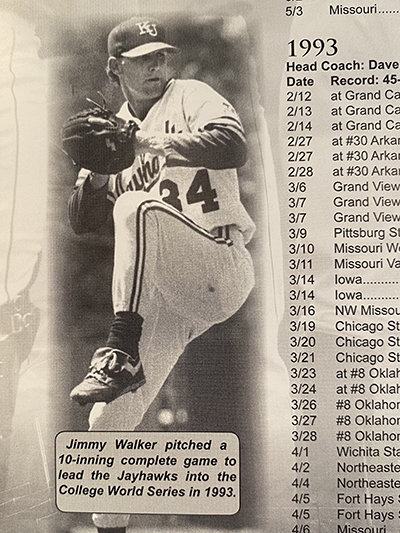 “I played in that stadium the last year before it was torn down,” he said.

His third spring training camp, with the Bowie, Maryland, Baysox, was memorable for reuniting him with a friend from Nickerson, who’d been drafted by the New York Mets out of high school and traded. But Walker injured his shoulder, which required surgery and rehabilitation, and when the Orioles proposed sending him down to a lower-level minor league team, he decided it was time to “move on.”

It was, after all, a promise he’d made to his wife, Kaely, an Augusta, Kansas, native and physician assistant he’d dated since college.

“When I asked her to marry me, she said she would marry me, but she was not going to marry a career minor leaguer.”

Walker graduated from KU School of Medicine-Kansas City in 2001. Initially interested in neurosurgery, he switched his residency to anesthesiology at the University of Cincinnati College of Medicine, completing fellowships in critical care and neural critical care there in 2007.

He returned to Kansas to work with Anesthesia Consulting Services at Ascension Via Christi St. Francis. Walker said the post gave him the chance to concentrate on three priorities: anesthesiology, critical care and working with residents.

“My idea of being a doctor was being able to save a life when somebody needed it. Getting training in those kind of lifesaving skills as an anesthesiologist and intensive care doctor, that’s really why I went into medicine. I get to practice those things all the time.”

As for working with residents, he views it as “my way of coaching. I’ve grown up with a family of teachers and coaches. You can have such a great influence on young individuals. Since I couldn’t do that kind of coaching in sports, this was my way.” 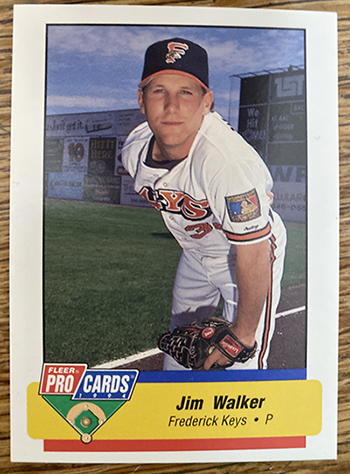 He took over as director of the 20-person residency program in 2011.

After a decade of running full tilt at all three priorities, Walker recently stepped back from operating room anesthesiology, partly to spend more time with his son, Brandt, a junior at Andover High School, and daughter, Brooke, a sophomore. Brandt works as a fan host for the Wichita Wind Surge minor league baseball team and Brooke is a three-sport athlete who’s already garnering interest from Division 1 college basketball programs.

“I try to keep in shape, but my daughter surpassed my basketball skills long ago, and my son easily outpaces me in any race more than 100 meters,” Walker said. “They inform me I’m really not good enough to hang with them anymore.”

Looking back, Walker said his own sports background has “unquestionably” played a big role in his medical career and approach to running the residency program.

“I think the teamwork mentality and the importance of a team even applies in medicine. We look for hardworking, unselfish team players. Right or wrong, many of the things that I do and the way I run this program are based on teamwork and a sort of sports mentality.”