Surgicare of Wichita's donation aids Simulation Center, others across Wichita

“We felt like we won the medical supply lottery of sorts,” said Erin Doyle, program director for KU School of Medicine-Wichita Simulation Center. “Not only were there medical supplies, but equipment as well.” 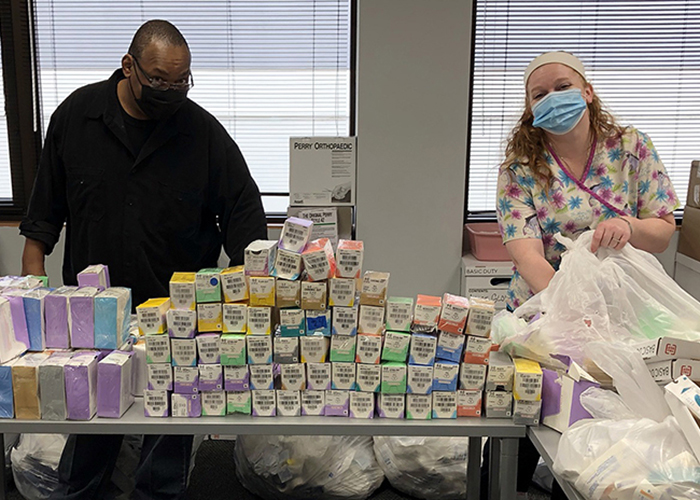 Greg Cooper, standardized patient, and Kelsey Brownlee, Simulation Center technician, sort through medical supplies at KU School of Medicine-Wichita. Surgicare of Wichita's donation of the supplies not only aided the Simulation Center at the medical school, but other programs in Wichita and beyond.

One man's loss is another man's gain. That couldn't have been truer than when an unfortunate humidifier problem affected some supplies at Surgicare of Wichita.

After they were packaged in 55-gallon trash bags, stowed in a 10'x15' storage unit and audited by its insurance company, the question of what to do next arose.

There is a medical waste disposal service Surgicare could have used, but the cost is five times that of normal disposal services and, while the supplies could no longer be used for humans in the United States, they are still effective for teaching and for mission work in developing nations, so discarding them was not the answer.

A member of the Surgicare governing board contacted Erin Doyle, program director for KU School of Medicine-Wichita Simulation Center, with the good news.

"We felt like we won the medical supply lottery of sorts," Doyle said. "Not only were there medical supplies, but equipment as well." 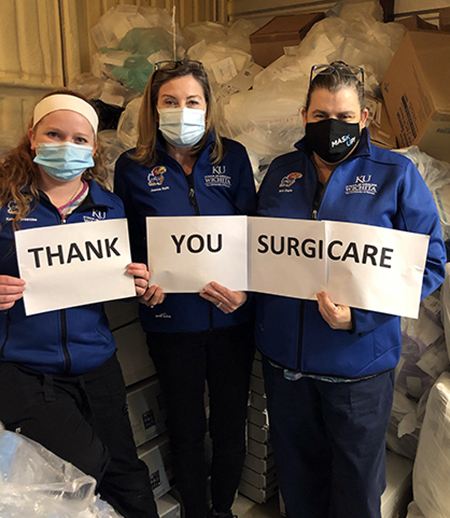 After a few weeks of careful inventory and labeling by Doyle, other Sim Center staff and several volunteers, a determination was made on what could be used by the medical school and what could be donated to other academic and health programs.

"Several items would have cost $4,000 and $5,000 to purchase and some surgical equipment that cost about $20,000 each easily brought the total value to about a half million dollars," Doyle said.

The Sim Center was able to keep about 20% of the inventory and will share items with the school's Standardized Patient Program, too. The Standardized Patient Program employs specially trained and coached individuals to simulate patients being seen by medical students and residents, which gives them the opportunity to learn and demonstrate a variety of patient care, communication and interpersonal skills in a safe, controlled environment. Endoscopy surgical supplies have been offered to KU Wichita Surgical Skills Lab at Ascension Via Christi St. Francis.

"Some of the items we kept were because we can't order them during COVID-19," Doyle explained. "We can't order sterile gloves and gowns, but we still need them so it's huge that we have them because we don't have access anywhere else to get them."

Doyle gave the example of a box of 100 sterile gloves now costing $25 a box when they used to purchase them for $4.99.

"Some of the items are more for nursing care like dressing supplies and Foley catheter kits, which are things we don't use here," said Doyle. "And because it was a surgery center, it had anesthesiology supplies, which were perfect for Newman University's respiratory, nursing and certified nurse anesthesiologist programs."

When Margo Wagner, program director of Newman's Respiratory Therapy Program, was contacted by Doyle she told Doyle that she couldn't believe the donation. She was excited that each of their students would be able to work with their own oxygen masks and cannulas. She said the supplies are going to enhance the students' hands-on learning experiences in the labs. She told Doyle that it was a blessing. 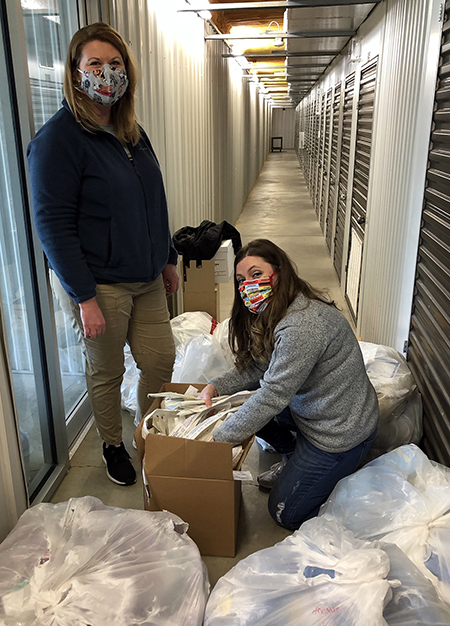 "Aside from the volume of things given," said Doyle, "there was such a wide variety of items and we really worked hard to get them distributed around Wichita. This has been a coming together and we're rekindling some partnerships. It's awesome."

About a year and a half ago, many of the Sim Center's community partners lost their simulation coordinators so regular contact and sharing of resources dwindled or ceased to exist. But about a year ago, conversations resumed and a Wichita Area Simulation Alliance Group was formed with nurses, medical professionals and physician assistants. Respiratory therapists and surgeons are interested in joining to discuss sharing equipment and people resources. There are monthly meetings and members are working on a mission statement.

The storage unit is almost empty now. Only a few nursing supplies remain and they are sure to be claimed soon.

"This donation was another way of bringing us all together," Doyle said.