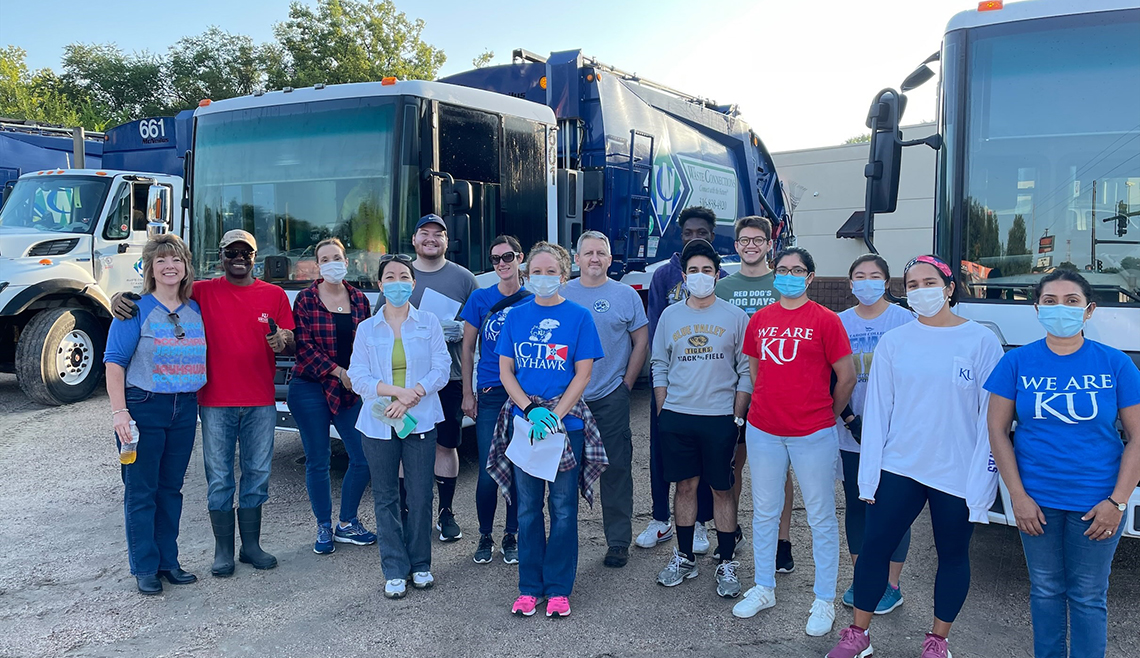 KU School of Medicine-Wichita employees, students and residents volunteered for the 2021 annual cleanup day in the A. Price Woodard neighborhood.

At KU School of Medicine-Wichita, members of the Wichita Diversity, Equity & Inclusion Community Partnerships Committee are introduced to area organizations and learn of possible collaborations. One of those relationships turned into volunteering for a neighborhood cleanup in the A. Price Woodard neighborhood.

On Saturday, Aug. 21, nearly 20 employees, students and residents from KU School of Medicine-Wichita worked the morning to help create a healthier living environment for residents with less mobility or less access to resources by picking up surplus items. Four packer trucks drove within the neighborhood's boundaries of Hillside to Hydraulic and 9th to 13th streets with several volunteers following each truck on foot or in a vehicle.

Other volunteers were located with the four stationary skids within the neighborhood to help other neighbors unload items that they brought. There was also a city tire truck available to those who could bring their tires to that location. One volunteer group loaded 65 mattresses/box springs into the packer trucks. Two of the packer trucks were loaded to capacity. A. Price Woodard, a Wichita lawyer, city council member and the first African American mayor of Wichita, pictured in the 1970s. He is the namesake of the neighborhood surrounding KU School of Medicine-Wichita.

The A. Price Woodard Neighborhood Association was named for the city's first elected African American council member who also served as mayor from 1970-71. At that time, Wichita City Council members took turns serving as mayor for one one-year term each. Woodard was also a local attorney.

The association was formed in 2006 and was led by Janet Wilson for about a dozen years. Wilson established annual neighborhood cleanups the first year of the association and also tended a community garden, owned several properties in the area and helped numerous residents improve their properties. She died in 2020. Janet Wilson in 2018, the first president of the A. Price Woodard Neighborhood Association.

"Janet was also a member of the Wichita Independent Neighborhoods and spent countless hours volunteering with that organization," said Becky Fields, community service representative in the office of Jeff Blubaugh, Wichita City Council member for District 4. "She was extremely well loved by hundreds of citizens."