Tori Gleason, a Master of Public Health student at KU School of Medicine-Wichita, is working to help the LGBTQ+ community achieve health equity 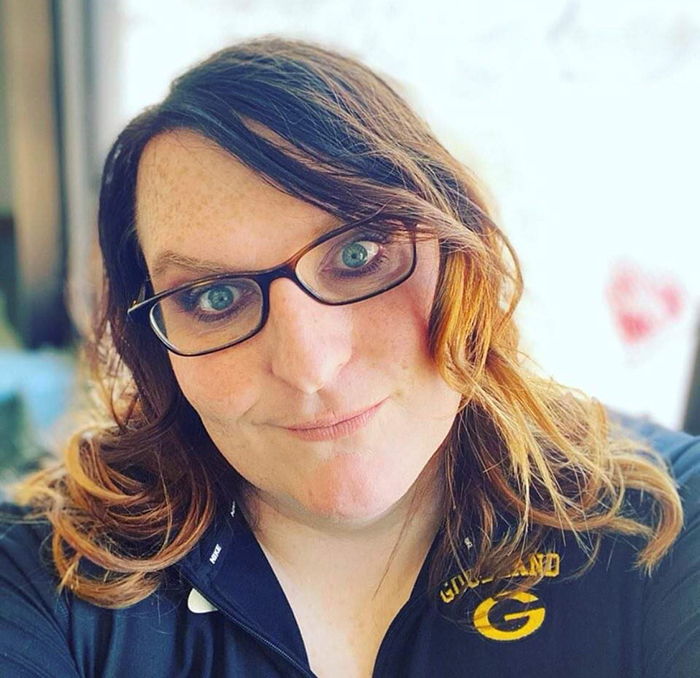 Growing up in western Kansas, Tori Gleason knew that the area faces the same kind of health care challenges as most of rural America: a shortage of providers, technology lags, resources strained by population shifts.

So when she became a chiropractor, Gleason returned to share her skill set.

Gleason, who is transgender, often feels like she doesn’t belong in the rural western Kansas town of Goodland. But that doesn’t stop her from trying to make a positive difference here.

“I want to give back to my community and make things different because I have a passion for rural health,” she said.

Since being outed by a medical provider some 4 1/2 years ago, she has faced both harsh opposition and strong support from within the community.

“It was before I was ready to tell my story. It’s frustrating when somebody beats us to the punch, and especially when they don’t do it the way you would have done it.”

She also felt that she’d lost control of some part of her identity. Gleason noted that she was undergoing counseling but had not begun the physical process of transitioning at the time.

“I’ve had death threats, threats of violence against me,” she said. “But that is not to say all of western Kansas is like that.”

In addition to running her practice there since 2008, Gleason served on the board of Goodland Regional Medical Center, a critical access hospital, from 2011 to August of this year. Gleason believes residents of smaller communities deserve the same “health equity” as urban residents.

Now Gleason, a Master of Public Health student at KU School of Medicine-Wichita, wants to use that training to further help another marginalized population segment — the LGBTQ+ community — achieve health equity.

Along with her classes, she is taking part in several research projects into the health care experiences and needs of LGBTQ+. As a consultant, she’s worked with KU, the Masonic Cancer Alliance, American Hospital Association and other organizations on improving outcomes for that population.

Gleason said she might never have enrolled in the MPH program if not for the COVID-19 pandemic, which led KU Wichita to offer it online. Living 17 miles from the Colorado state line, with joint custody of two children, Gleason said it wouldn’t have been practical to travel back and forth to Wichita.

“The pandemic removed a barrier to me,” she said. “I’m in Mountain Time Zone, I’m so far away.”

Gleason, who’s on track to graduate in 2023, grew up in Dodge City and majored in biology at Kansas State University. She earned her doctor of chiropractic degree from Palmer Chiropractic College in Davenport, Iowa.

One of Gleason’s specialties is working with athletes. Northwest Kansas Technical College in Goodland is known for its wrestling team, and Gleason often collaborates with the program’s physician, trainer and physical therapist to “get an athlete back on the mat as soon as possible.”

“It’s a team concept. It’s a place where you check your ego at the door.”

The pandemic has also allowed Gleason to take part in research remotely that otherwise might not have been possible. She is involved in studies of several different LGBTQ+ age groups, as well as how the health care system as a whole serves that community. When it comes to research, Gleason believes there should be “nothing about us without us.”

Part of her passion for marginalized populations comes from her background growing up in Dodge City, when she found no resources or help for a young queer person. Her desire is that “kids not go through the same thing I did as a kid.”

Gleason acknowledges that living in Goodland presents challenges, as she may be the first openly transgender some residents have encountered.

But many are supportive, especially the athletes with whom she works.

“The vast majority of people under 25 are fine with it. I have high school students who will correct their parents on the proper pronouns to use.”