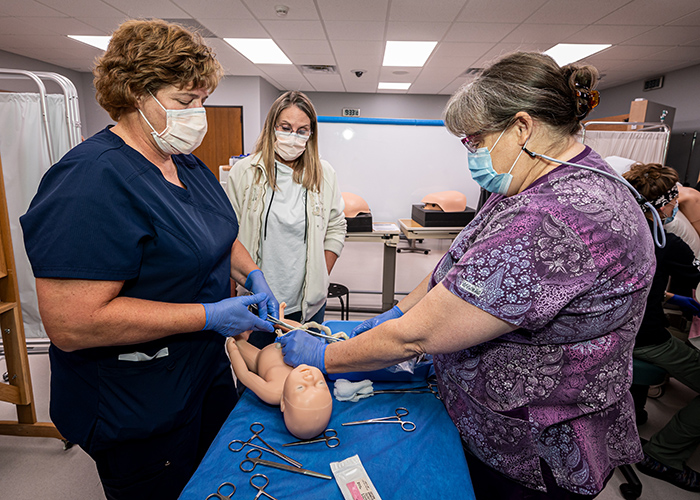 As the number of women in the military grows, the Veterans Health Administration is seeking ways to better care for them after their service.

“We are having an increasing number of women” come to the Dole VA Medical Center, said Patricia Petrakis, M.D., chair of its ER department. “We like that, but we also want to be prepared for that.”

Petrakis estimated that about 6-7% of the 11,000 patients who came to the ER at Dole last year were women. With women now constituting about 14-18% of active duty, reserve and guard military, that number will only increase. 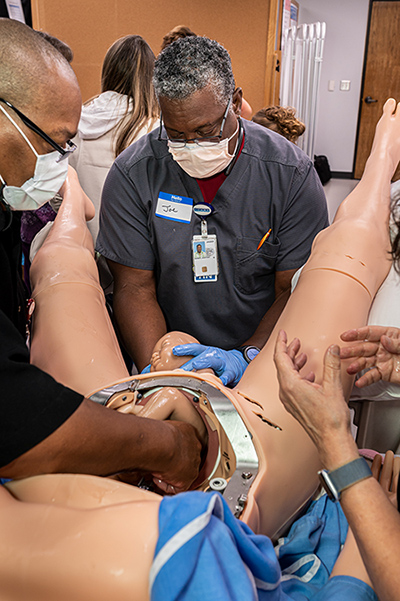 The point of the training wasn’t to turn the VA emergency rooms into women’s clinics or birthing centers. For the most part, VA hospitals provide primary care. A pregnant veteran who comes to the ER would be directed to a gynecologist or, if the birth appears imminent, most likely transported to Wesley Medical Center by ambulance. However, if a birth absolutely must take place at the Dole ER, the simulated birthing at KU School of Medicine-Wichita will be valuable experience, Petrakis said.

Reactions of the nurses who caught a baby from the Simulation Center’s manikin, Victoria, ranged from “Wow, that’s super cool” to “It’s terrifying but good” and “They are slippery.”

No one has given birth at the Dole VA but “it’s a consistent possibility,” said Laurie Pfeiffer, its program manager for women veterans.

“It’s good for our providers to have some practice and see what it’s like if all of a sudden you can’t get a patient in an ambulance.”

In addition to simulated birthing, participants performed breast and pelvic exams on standardized patients, getting valuable feedback in the process.

The standardized patients “could say that’s a little too much pressure, or that’s not deep enough to feel the ovary,” said Erin Doyle, the Simulation Center’s program director. “A couple providers noted that it had been a decade or two since they had performed a pelvic or breast exam.”

The group conducted panel discussions about handling sexual assault cases — identified as a serious problem by the military — in addition to patient privacy and equipment needs pertaining to women’s health. 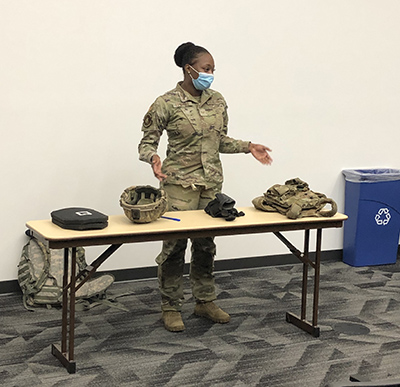 One of the most valuable sessions involved a couple of enlisted females from McConnell Air Force Base who showed participants how much gear they wear and carry around on a regular basis.

“When you realize they’re lugging 80 pounds of equipment every day, just standing in that gear would make my head and back hurt,” Petrakis said. “It makes you a little more empathetic.”

Pfeiffer said the training at the Simulation Center was one of the largest local programs of its kind yet conducted in response to the VA’s push for better care of female veterans. The training was developed by the VA’s national women’s health program except for the imminent birthing section, which KU School of Medicine-Wichita developed.

Previously, VA nurses and providers would only get simulation-based training if they were one of the few people from each VA hospital selected to go to the VA's large Simulation Center training facility in Florida.

“This new approach is being looked at nationally for a best practice spread to other VA facilities,” Pfeiffer said.

Petrakis, a 1993 KU Kansas City medical school grad who completed her residency at Smoky Hill Family Practice in Salina, said KU Wichita “really facilitated our learning. They had the simulations, the displays, the auditorium and sound system. They had everything we needed.”

And that should help women veterans down the line.

“Many of our women (patients) have noticed a change in our VA care,” Pfeiffer said. “It’s all of our staff being open to assisting women in the services they need.”