Recent sessions at the Sim Center show its potential value to the larger medical community. 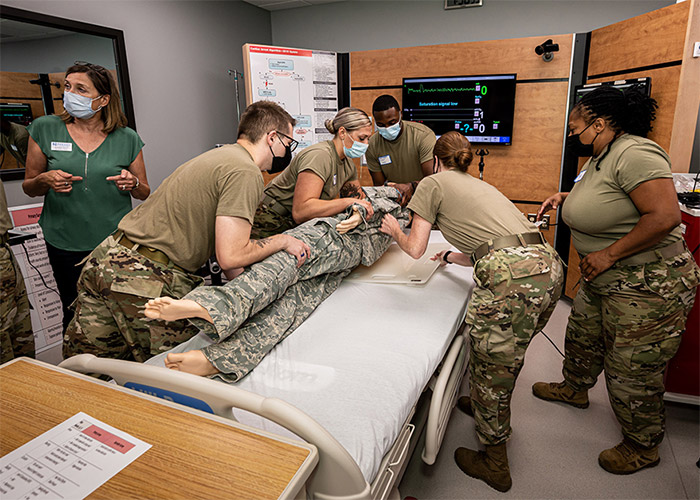 The Kansas Air National Guard resuscitation team rolls SimMan to place a backboard under him to provide a hard surface for quality CPR instruction. The Simulation Center at KU School of Medicine-Wichita provided training for Guard members, who brushed up on emergency assessments, trauma care and other skills.

The Simulation Center at KU School of Medicine-Wichita has mostly served students since officially becoming a part of the school four years ago. That remains its primary goal, but recent sessions in the center show its potential value to the larger medical community as well.

Over several weeks this summer, the center hosted three non-student groups. On August 7, area physicians trained in POCUS (Point of Care Ultrasound) technology and techniques. On August 8 and 9, members of Kansas Air National Guard medical unit brushed up on emergency assessments, trauma care and other skills. And on September 8 and 9, employees of the Robert J. Dole Veterans Administration Emergency Department, led by the women's health education department, visited to work on increasing their skills and knowledge of available resources for providing care to female veterans.

"We were open to it but didn't have anybody requesting that type of thing other than just a basic tour or open house," Erin Doyle, the center's program director, said.

Word seems to be out now.

As Lt. Col. Keri Kavouras, of the Kansas Air National Guard's 184th Medical Group, said: "Hands-on skills training in any sim lab will do technically, but to work in a sim lab that's pretty fantastic is even better for training purposes."

The Air Guard has annual training requirements for its medical unit that include simulation work. The unit divided into two groups with some coming on Sunday, Sept. 8, and the rest coming on Monday, Sept. 9. They spent a day moving between different tasks in the simulation center and were able to complete two-thirds of that required training. Several indicated the training would help them in their civilian medical jobs as well as their guard responsibilities, Doyle said. 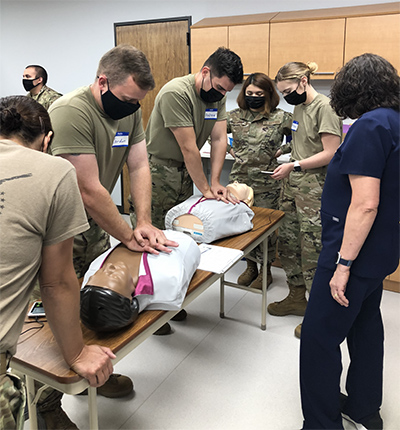 Twenty-one uniformed nurses and emergency medical technicians from the guard participated. Members are based at McConnell Air Force Base but come from all over Kansas and surrounding states. During the past 18 months, they and other medical personnel with the guard have deployed across Kansas to help with COVID-19 testing and vaccinations, including working in prisons.

The center's staff began working on a training program for the guard after Kavouras contacted Doyle last winter to talk about potential collaboration. The Simulation Center staff and faculty took ideas from the unit's training requirements as well as a battlefield disaster guide used by the guard.

The training started with a refresher course on pain assessment, including what to do in cases involving children and an adult with dementia or a language barrier. From there it moved on to hands-on training in IO (intraosseous) line placement taught by retired paramedic and center teaching associate Gary Tolle, using medical models and a manikin.

"We took the first five minutes of a Code-blue situation and rotated everybody through the leadership role and did it over and over again for about 40 minutes so everybody's developing that muscle memory," Doyle said. "If you have two people, how do you assign roles? If you only have one person, you have to do it all, which is difficult."

Doyle said the goal was not to mimic battlefield conditions, although a future training session in simulated blast injuries might be a way of doing that. In addition to training in physical skills, the participants seemed to "really like the teamwork opportunity it gave them," Doyle said. "They wore name tags with their first name and no rank. Some of the Guardsmen commented that it was great how everybody got to be an equal learner."

"The instructors at KU Wichita are obviously subject matter experts in simulation, so that was extremely beneficial to us," she continued. "The equipment was top-notch; the environment was very learning friendly and close to home."

Doyle said the center is "definitely looking at continuing this collaboration and building out even further from what we started this year."

"It was just a really fabulous experience," Doyle said. "Our Sim Center is very thankful for their service and thankful that we were able to help be a part of that training."

Above, right: In the Simulation Center at KU School of Medicine-Wichita, men and women from the Kansas Air National Guard practice CPR compressions with coaching from their peers and a handheld feedback device.