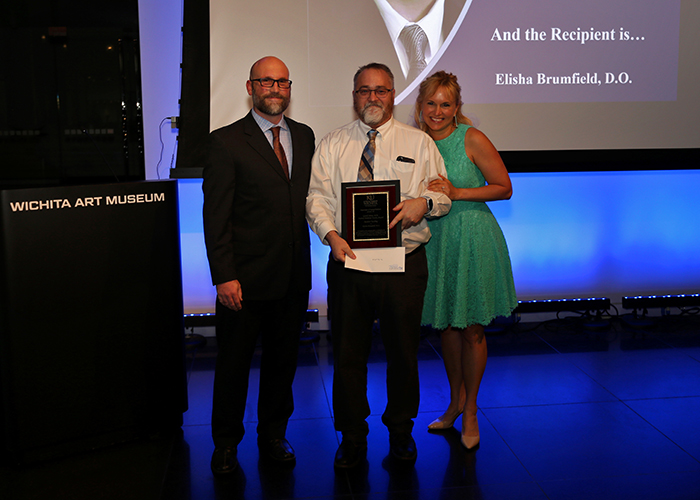 Teaching awards from KU School of Medicine-Wichita, of course, annually honor doctors who make it their mission to connect with students and residents and pass down knowledge to the next generation. They also honor the work and legacies of the doctors whose names they bear.

Over the past two years, the medical school’s Internal Medicine department and KU-sponsored residency program decided it was about time to put a worthy name on each of their awards, which recognize contributions by full-time teaching faculty and volunteer clinical professors. Dean Garold Minns, M.D., and Shaker Dakhil, M.D., were natural choices.

“We were looking at ways to recognize some of the docs who have a legacy and profound impact on many of us who are attendings, practicing medicine in the community and now teaching others,” said William J. Salyers Jr., M.D., residency director and chair of Internal Medicine.

Recognizing a doctor and educator

Minns, a member of the Wichita campus’ second graduating class in 1976, joined the faculty in 1980 and occupied numerous faculty and leadership roles before becoming dean. An infectious disease specialist, he’s been Sedgwick County health officer since 2008.

"I am humbled to be recognized by the Department of Internal Medicine through these named awards," Minns said.

“There would be a very small percentage of doctors in the Wichita community that wouldn't be able to share a story of how the man's impacted their career, whether it was during medical school, residency or even in practice,” Salyers said of Minns. “As our county health officer, he played a huge role in helping the community get through this pandemic. So the timing really made a lot of sense.”

The awards, given during residency graduation in May, bring a plaque as well as an honorarium, and originate through nominations by students and residents.

“With that group, it’s faculty members who year over year have gotten great feedback. We’ve known for a long time that they’re great teachers,” Salyers said.

“My goal is to teach the students the practical aspect of patient care,” said Reddy, who works with third-year medical students at the Robert J. Dole VA Medical Center. “I am passionate about teaching them good bedside manners and effective communication skills.”

“Dr. Minns has been an important role model and teacher throughout my career,” said Duran. “He clearly loves to teach students at the bedside and imparts vital knowledge and experience. If I have even half the impact he has had on learners, then I can rest assured that I have played an important part in the development of physicians.”

Reddy, who trained as a resident under Minns, said: “To be receiving an award named after him is truly an honor and humbling experience.”

Brumfield said the award came as a “pretty special” surprise and honor, since Minns recruited him to residency and “when I think of a teacher, I think of him.”

Teaching is a two-way street where both resident and doctor gain understanding.

“You can only influence people when they notice you can be influenced by them. True teaching is when you’re open to their influence,” Brumfield said.

This year marked the inaugural Shaker Dakhil, M.D., Volunteer Faculty Award. Dakhil, an oncologist and president of Cancer Center of Kansas, began practice in Wichita in 1981 after training in his native Lebanon and Michigan. He became volunteer clinical faculty soon after his arrival and has had a key role in making Wichita’s Lebanese medical community a sizable one, especially with internal medicine subspecialists.

“Dr. Dakhil played a huge part in bringing Lebanese medical school graduates and introducing them to residency programs here and then practicing in the community as well,” Salyers said.

For Dakhil, a clinical professor of medicine, having the award named after him was a surprise, one family members got to share at the May ceremony.

“Dr. Salyers mentioned to me that the university wanted to do something special, but I had no clue what it was,” said Dakhil, whose wife, Kathie, serves on the 4-Wichita Advancement Board promoting the medical school’s mission. “I'm proud to be part of it. This is a treasure we have, a medical school, and when you have a treasure you take care of your treasure."

Fredy Eid, M.D., a cardiologist, said being the inaugural winner was special. “It is an honor … the first one named after Dr. Dakhil. There is no doubt about how impactful he was in shaping how the medical community is currently in Wichita. He helped so many physicians come to Wichita from far and wide. He is a role model.”

“It definitely gives a sense of satisfaction that the teaching messages are getting through to them and they are appreciative,” Eid said of being recognized. “This is my way of giving back. I was taught by my mentors during residency and fellowship. Now, it’s my turn to teach the next generation. The better I teach them, the better they will take care of me and my family in the future.”