More than 30 friends and family members of medical students attended the event, which was organized by members of the medical school's Jager Society. 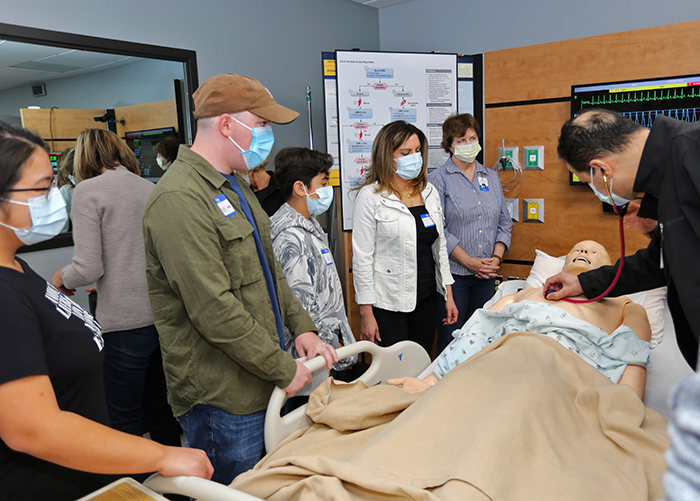 During Family Day at KU School of Medicine-Wichita, medical students and their family members interact with a high-tech manikin in the Simulation Center.

On a Saturday morning in September, a small crowd gathered around a hospital bed in KU School of Medicine-Wichita’s Simulation Center. The “patient” — a medical manikin — had fallen from a ladder. Suddenly, he went into cardiac arrest.

This morning, most of the “care team” were not medical students, but members of their families. Parents, siblings and spouses looked on anxiously as Eli Brumfield, D.O., FACP, Simulation Center medical director, demonstrated how to begin chest compressions.

The simulation was one of several experiences during the first KU School of Medicine-Wichita Family Day, organized by members of the medical school’s Jager Society. More than 30 friends and family members of first- and second-year medical students attended the event.

“In college, there’s always a parent or family weekend, but we don’t have that in medical school,” said Michala Sliefert, a second-year medical student and co-leader of the Jager Society. “We wanted to bring them into our lives for a couple of hours, so they understand better and are comfortable knowing what we’re doing for what feels like 24 hours a day.”

Family members learned how to apply chest compressions and use a defibrillator on the manikin who had fallen from a ladder. Another group took turns delivering a manikin baby. Outside the Sim Center, attendees had the opportunity to operate an ultrasound and learn how to suture.

The program, which offered morning and afternoon sessions, also included a campus tour, a presentation and Q&A, and lunch.

“It’s one thing to say what we do, but it’s another thing to experience it,” said Dania Jumpa, second-year medical student and co-leader of the Jager Society.

Jumpa’s mother, Angela, enjoyed attending a parents’ weekend when her daughter was an undergraduate, leaving with the sense that she better understood her child’s new life. Sliefert and Jumpa set out to create the same kind of experience for medical school families and “friends who feel like family.” 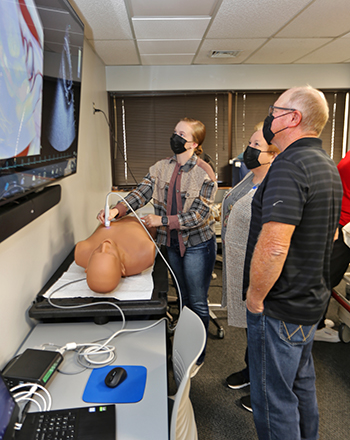 The event was a group effort: Members of the Jager Society, faculty and other medical students volunteered to lead tours and guide attendees through the use of equipment. Even Garold Minns, M.D., dean of the medical school, stopped by to chat with attendees.

Angela Jumpa and her daughter, Leury Balcacer, were both thrilled to have the chance to see what Dania was learning.

“What these students are doing is so important,” Balcacer said. “We wanted to be here to learn how to support them.”

Jumpa and Sliefert hope that Family Day becomes a tradition at the medical school. Next year, they would like to expand the event to include the families of third-year medical students.

Though designed to benefit their families, the students appreciated the opportunity and said it was a bonding experience for them as well.

“We spend so much time together, but we don’t know as much about each other’s backgrounds,” said Sliefert, whose parents drove down from Kansas City for the event. “It was great to see all the students have fun with their families.”

At first, some attendees were hesitant to try equipment or “catch” the manikin baby during the simulated delivery scenario. But one by one, each took a turn.

“You could see the smiles throughout the room,” Jumpa said.

“For my mom, one of the most wonderful things was to see me call a code and perform CPR. I could see her smile, because she knew this was something I had dreamed about for a long time.”