KU School of Medicine-Wichita students' new fourth-year elective intends to ease the transition and turn down the anxiety. 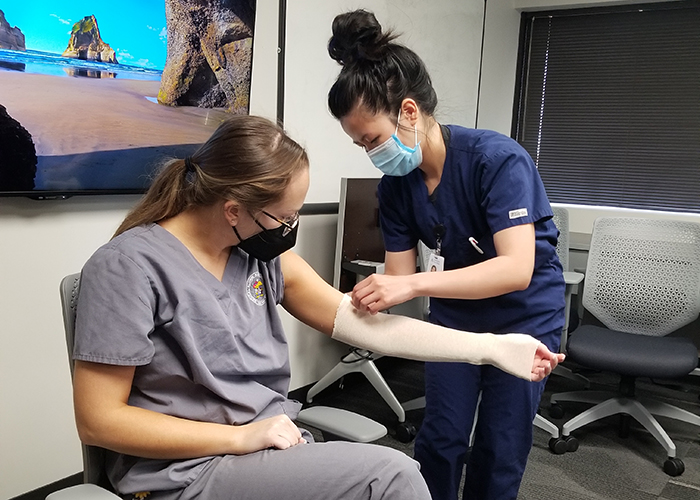 Two fourth-year medical students practice casting during Family Medicine Bootcamp before they graduate and go into residency. Seated is Morgan Weiler and standing is Khanh Hoang.

Having survived Step 1 and 2 exams, clinical rotations and anxiety about The Match, students at KU School of Medicine-Wichita are no doubt eager for the next step: residency.

But that next step can deliver new uncertainty as they move into roles of growing responsibility as students, teachers and the person in charge. A new fourth-year elective called Family Medicine Bootcamp, which recently occurred in late March and early April, intends to ease the transition and turn down the anxiety.

The course — a mix of didactics, discussions and hands-on activities — provided soon-to-be residents with refreshers on such skills as delivering babies and exposure to new responsibilities such as writing discharge summaries and handling Code Blues. They also learned about finances, managing emotions, and receiving and giving feedback.

“We started talking about it in our department because we saw a need for medical students to hone skills they don’t always work on as students but are expected to know in residency,” said Tessa Rohrberg, M.D., assistant professor in the Department of Family & Community Medicine and director of fourth-year family medicine electives.

“I thought it would be a really good wrap-up to the year,” said Anne Recker, headed to residency in Greeley, Colorado. “It was something to make me feel a little bit more ready and also let me hang out with my family medicine peers.”

“It came at the perfect time, right after I matched,” said Caitlin Henry, bound for a University of Utah residency. “I hadn't done family medicine per se for quite a few months. So I was like, ‘OK, let’s get into it again.’”

Henry and Recker were among eight soon-to-be family medicine residents and one psychiatry resident in boot camp. Almost every day involved hands-on activities, with three half days in the Simulation Center and another half day casting and splinting.

“It usually takes multiple learning opportunities to develop the competence and then the confidence so you can then go and do the skill in another setting,” said Erin Doyle, Simulation Center program director. “You may be biting your nails and knocking your knees, but having done it a few times before, you have more confidence you can pull it off.” 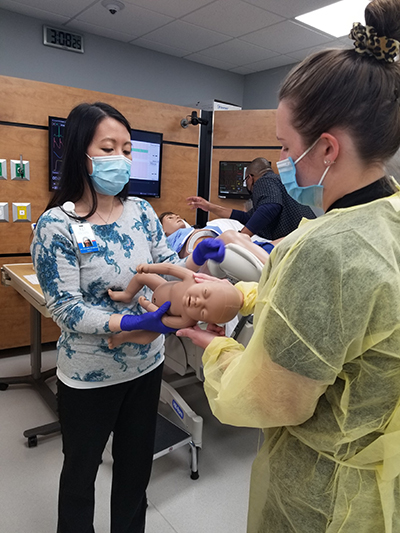 The simulation training went beyond manikins and workstations, as Code Blue scenarios included a family member in the form of a standardized patient playing the role of a relative who can be helpful, disruptive or both.

Another hands-on exercise involved mock messages about a patient. At unpredictable times, Rohrberg “texted students an urgent need from a nurse. They would call and work through the nurse’s concern. So, they were caught off guard but could practice their communication and triage skills. That was really fun … for me.”

“Something that was really useful,” Recker said, “was having to do unfamiliar, sometimes uncomfortable tasks like answering the nursing page or triaging or the discharge summary, which is all stuff we never did as med students but is going to be routine. My favorite part was hands-on stuff like practicing casting and splinting. The afternoon of OB-GYN procedures practice was just a ton of fun because we got so much out of it.”

“It was nice to practice those things in a scenario where you can make as many mistakes as you want so we hopefully make fewer mistakes in practice,” Henry said.

Medicine was just part of the curriculum. The students learned about research requirements during residency and about maintaining board certifications. The intricacies of residency milestones — competencies they’ll be graded upon — were demystified.

Julie Galliart, Ed.D., associate dean of faculty affairs and development, led the “Managing Self Journal Club” session, where students gathered to discuss assigned materials. They read up on managing themselves and their emotions while considering the emotions and actions of others. All can help them work with others, whether medical students, nurses, residents or attending physicians. Topics included “emotional intelligence,” which is the ability to evaluate and regulate strengths, emotions and motivations of yourself and your team, and the “hidden curriculum” where actual practice deviates — sometimes negatively — from best practices taught in the medical school curriculum.

A goal was to raise awareness of “the power of the person who is now a role model. The students were very engaged and very open about their own experiences,” Galliart said.

She said other KU School of Medicine-Wichita programs have already discussed having boot camps, and “that speaks to the timeliness and importance of the overall idea.”

“It really does smooth some of their anxieties about residency,” Rohrberg said. “It would be really valuable for all medical students to have something like this.”

The boot camp provided a reminder “that thousands do this every year,” Henry said. “Yes, it is nerve-wracking, but we learned skills about how to better handle things you are stressed about. The refresher calmed some nerves about the unknown.”