Student who started book club at KU School of Medicine-Wichita sought a way to connect with others in her rotation group "without feeling the pressure of curriculum." 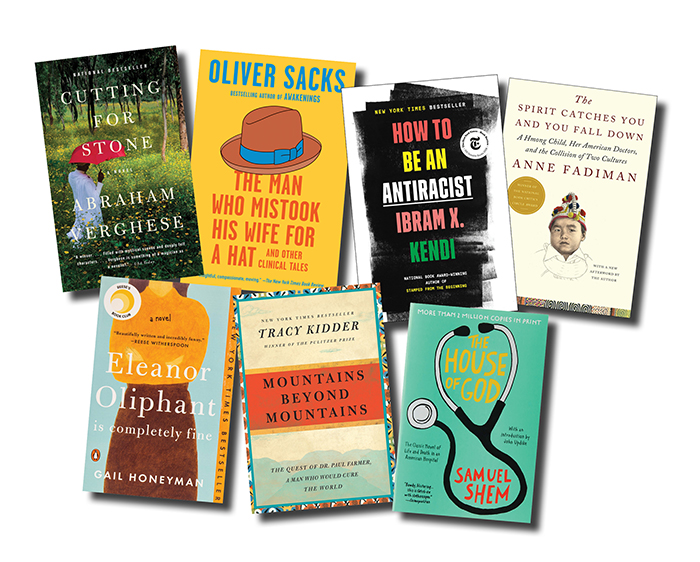 Students in book clubs at KU School of Medicine-Wichita have read a variety of novels and nonfiction books with a medical focus. See a list of some of the book titles below.

Good medical care can be harder to provide if you don’t have a good understanding of where the patient is coming from, where they’ve been and what experiences they’ve had with the health care system.

That’s a common theme among KU School of Medicine-Wichita students who joined book clubs to read novels and nonfiction with a medical focus. They’ve gained knowledge and insights into what classmates think and care about. Vigorous, sometimes vulnerable discussions can do that.

“It was an awesome opportunity, something we don’t get to do in our clinical training years,” said fourth-year student Gabby Fangman, who’s interviewing for OB-GYN residencies. “If you are friends with or learn about a diverse group of people, you're likely to have more empathy, understanding and perspective on diverse groups of people. And that can only serve us well in the future.”

Fourth-year student Jo Leatherman initiated a club last year. A book lover, she sought a less formal way to connect with others in her rotation group. “Without feeling the pressure of curriculum, we wanted to have more authentic conversations about important topics.”

Leatherman extended the invitation classwide, and they’ve ended up with as many as 15 members taking part in discussions after completing a book, usually over two months.

“We have lectures on medical ethics and all sorts of important things. But really letting yourself be vulnerable and having conversations like we've had in this club takes it to a different level of introspection,” said Leatherman, who taught school before medical school. “Literature is such an important part of that.”

Another member, fourth-year student Jordan Strickler, recalled books and the discussions that stuck with him. “Eleanor Oliphant is Just Fine” stirred a vigorous conversation of ethics and morality involving whether the main character, who has mental health issues, is a victim or a predator because of her upbringing. “I really began to understand my fellow classmates and how they view the world.”

And “The Spirit Catches You and You Fall Down,” centering on a Hmong family whose daughter has seizures, exposed how cultural differences can put patients and physicians on different pages. In the book, the family sees a spiritual as opposed to medical reason for the seizures. Strickler’s takeaway was “just how important it is to ask even the most basic of questions, even though sometimes it feels like they're unnecessary, because it can really impact patient care and a patient's outcome.”

Kellie Griffin and other third-year medical students formed a club this year among rotation group members. Having similar schedules, they’ve met in person, either at someone’s house or a local brewery (books pair well with beer).

Griffin was attracted to the chance to dig into books again after falling out of the habit under the load of medical school: “It helped me stretch my brain in ways I hadn’t in a couple of years.”

The club falls under “that spirit of being a forever learner, reading new things all the time and trying to figure out a new perspective,” Griffin said. “Reading does that for you, plants somebody else’s perspective.”

A similar desire spurred the creation of another, smaller group that’s studying “How to Be an Antiracist” by Ibram X. Kendi. It came together after Leatherman and fourth-year Kakra Boye-Doe discussed ways to help mentors make more relevant connections with students in the program that pairs med students with potential premed students. Members include Fangman, Strickler and fourth-year Caitlin Henry.

“We recognize that about 85% of our mentoring applicants identified within a historically excluded group,” Leatherman said. “And we want to find a way to educate medical students on how to mentor students from diverse backgrounds in a way that’s engaging.”

Boye-Doe, born in Ghana and raised in Lawrence, is a member of the Vice Chancellor’s Diversity, Equity & Inclusion Cabinet at the medical school. He and Leatherman have shared facilitation of weekly virtual meetings, where they discuss two chapters at a time. The book urges readers to examine their beliefs and the policies and structures that perpetuate racism and then act to actively fight racism.

Health care is one system to examine. “Medicine has had a role in perpetuating the stereotypes that exist today about Black people,” said Boye-Doe, mentioning past theories about mental capacity or that the prevalence of diabetes or hypertension is a factor of race as opposed to a consequence of racism and the stress and environments it creates.

“We thought that it would be a good idea to go through this to make sure we set a standard for our mentorship program, to make sure that we are respecting and appreciating the diverse population,” said Boye-Doe, who’s planning to be a psychiatrist. “It’s been a breath of fresh air to be in a community with people and read the book and try to implement that in how we interact with others. With that solidarity, some change can happen. It's just been nice to see people start to question, but also to move and act.”

“It’s made me look at my own belief system, made me recognize the advantages I’ve had to get where I am,” said Leatherman, who plans a family medicine career. “Openly talking about them, which is admittedly uncomfortable. Acknowledging those differences helps me see what I need to work on, where I have holes in my education and working with different cultures.”

The third-year group will soon start on another book examining race and medicine, through the lens of Black women and the fight for reproductive health. Griffin expects the book, Dorothy Roberts’ “Killing the Black Body: Race, Reproduction, and the Meaning of Liberty,” will resonate and draw in more readers than typical.

“It talks a lot about influence of race in medicine, and how certain groups have been mistreated or undertreated,” Griffin said. “It's pretty cool to be able to talk about these deep subjects with my classmates.”

From their readings, students have gained an understanding that goes beyond their own backgrounds and experiences, one they can take into the exam room.

“Now, when I have an encounter with a patient and others label them as difficult or noncompliant, my reaction is to wonder what’s going on. I enter those encounters with the thought that something else is going on that I don’t know about, that maybe I should have a more thoughtful conversation,” Fangman said. “After reading these books, I am more empathetic to strangers. I realize I don’t know what their prior health or life experience or their culture tells them about medicine.”

From the club and experiences abroad has come the realization of all he doesn’t know, said Strickler, who plans to be a pediatrician. “To be able to take care of any kid that's going to come through the front door, I need to learn as much about people and about different backgrounds and perspectives, because that's going to help make me the best physician that I can be and deliver the best care possible.”

“It's really powerful, what students can come up with and can kind of do to take charge of their own education,” he said of the clubs.

Student clubs at KU School of Medicine-Wichita have read books including: