Celebrate Day 366, organized by KU School of Medicine-Wichita’s Sharla Smith and Michelle Redmond, assistant professors in the Department of Population Health, is a 4-year-old event intended to acknowledge and combat the problem through education and collaboration. 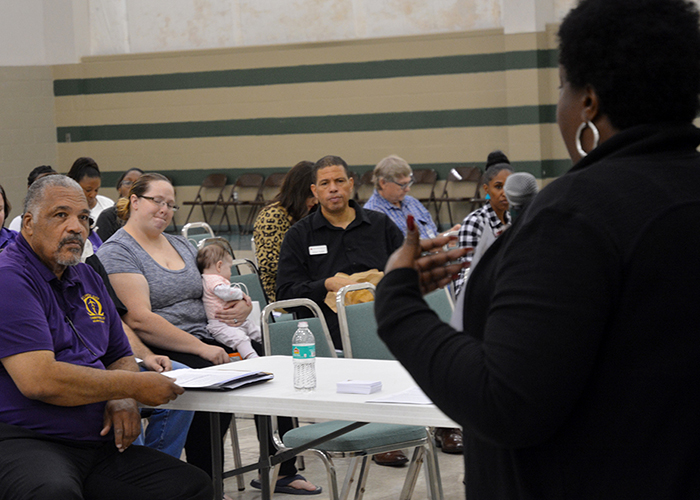 At right, Stacy Scott, Ph.D., MPA, founder and executive director of the Global Infant Safe Sleep Center, presents at a past Celebrate Day 366 event. At left, the late Carl Brewer, former mayor of Wichita, was a member of Omega Psi Phi Fraternity and had spoken on behalf of his fraternity about fatherhood.

Many take it for granted that babies are conceived, carried and born without a problem, that in America and Kansas a child readily survives to their first birthday without illness, death and grief.

But that's not the case for Black America and its mothers and fathers, particularly in Kansas, where a Black child is 2.5 times more likely to die before their first birthday - the definition of infant mortality - than a white child is. It's a deadly problem that's lessened some over the past two decades, but the disparity has not.

Celebrate Day 366, organized by KU School of Medicine-Wichita's Sharla Smith and Michelle Redmond, assistant professors in the Department of Population Health, is a 4-year-old event intended to acknowledge and combat the problem through education and collaboration. Occurring in October each year, and virtually in 2020, the event serves several purposes and is part of a developing statewide initiative to reduce infant mortality among Black families. 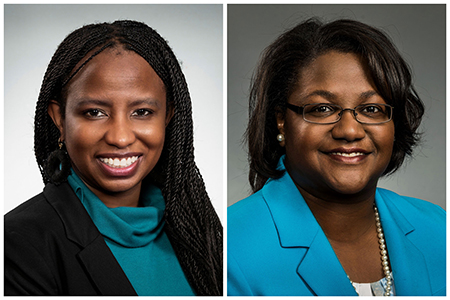 "We wanted to educate, create awareness and empower Black families. We wanted to change the conversation from death to life and include fathers because they are vital to the health and well-being of the mother and child," said Smith, Ph.D., MPH, the project lead.

One part of Celebrate Day 366 is honoring, with names marked on signed cards, children who have reached the landmark of their first birthday. A second purpose is to educate attendees about risk factors for children dying before that first birthday - in essence working to ensure an event like Celebrate Day 366 becomes obsolete. The third is to have a birth equity conversation to identify solutions that improve the health of Black mothers, fathers and infants, and dismantle the root causes of inequities.

"One of the biggest things was to include fathers, to make sure that we have a male voice," said Redmond, Ph.D., M.S., adding the initiative also seeks to include caregivers such as grandparents, aunts, uncles and siblings. "The fatherhood piece is really important, because it acknowledges that fathers are an integral part of the support system for the mom. Sometimes when we talk about infant mortality, we're focused on just maternal health needs."

Black sororities and fraternities play an important role in Celebrate Day 366, helping address what can be a key challenge in public health initiatives: reaching the intended audience. Alumni members of seven Greek organizations - collectively called Kansas Sisters and Brothers for Healthy Infants - are involved in Celebrate Day 366 and the initiative it has led to, the Kansas Birth Equity Network. The event, named after other awareness campaigns nationally, takes place at Wichita's St. Mark United Methodist Church, an early sponsor.

Celebrate Day 366 involves sharing resources and includes organizations covering breastfeeding, educational programs, housing, wellness and others. To spur participation, the event offers rewards such as gift cards and gift baskets. Educational sessions involve examining the numbers and causes and covering such topics as how to talk to your doctor and be an advocate for care.

The project and its scope have grown over time. The first year, sororities and fraternities funded Celebrate Day 366, soon supplemented by a Kansas Health Foundation grant. A two-year federal grant in 2019 from the Patient-Centered Outcomes Research Institute, which funds study of the comparative effectiveness of treatments and approaches, is financing development of the Kansas Birth Equity Network and its effort to combat Black infant mortality statewide.

"They made people aware about infant mortality and Celebrate Day 366 through word of mouth, churches, community events, barber shops, beauty shops and all the places Black moms and dads would be," Smith said.

Infant mortality cannot be adequately addressed without addressing Black maternal mortality. For Black Americans, infant and maternal mortality transcend education and economics. A Black woman with a college degree, for example, is five times as likely to die from childbirth as a white woman. Entertainer Beyoncé and tennis star Serena Williams, for example, suffered difficult pregnancies.

"Black women and infants are dying, and we must make Black maternal and child health a priority," Smith noted.

Leah Riddle-George, a member of the Sigma Gamma Rho Sorority involved in Celebrate Day 366, mentioned she was fortunate to have a good job and health coverage for decades.

"I didn't realize how high mortality was in Kansas, especially with African Americans, so that stuck with me and made me want to help," she said, adding that heightened awareness paired well with practical information on how to navigate care and doctor relationships.

"You have to get the information out there and teach people to advocate for themselves," Riddle-George said. "It's kind of like, just don't go by what the doctor says if it's not working, get a second opinion, push the issues, or go somewhere else that understands what's going on, I think that's a lot of it. Granted, if you don't have the good health coverage, it can be harder to get that second opinion."

"The members of the fraternities and sororities are experts themselves," Redmond said. "They have their own expertise they brought to the table, but also their own perspective as a community member."

The researchers and their community team are working to build the Kansas Birth Equity Network, forming connections with people and organizations doing similar work and having a common mission of raising awareness, doing research and finding solutions to the disparities and the infant deaths they bring.

"I've been really impressed with the community groups we're working with, and their willingness to trust us and to go on this journey," said Redmond, a member of Alpha Kappa Alpha Sorority.

At KU School of Medicine-Wichita, "we are close to the community. It can be hard to bridge those connections to the community," Redmond said. "One of the things you should do is actually talk to the community. We took an approach that we were not the experts here. ... We were all sitting down wanting to learn from each other."

Pictured above, at right: Sharla Smith, Ph.D., MPH, and Michelle Redmod, Ph.D., M.S., are both professors in the Department of Population Health at the University of Kansas School of Medicine.