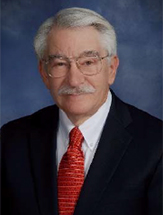 During his impressive career, Dr. Zamierowski - who completed his Plastic Surgery residency at KU Medical Center - has invented surface dressings and surgical wound devices for which he now holds more than 50 patents.

With the introduction of the V.A.C. external wound dressing in 1995, and then the launch of the Prevena surgical incision dressing in 2009, Dr. Zamierowski joined the ranks of an elite group of physician inventors who have had more than one commercially successful product.

The V.A.C. has now been used to treat more than 6 million wounds. He is most proud of its use as a surgical adjunct and to stabilize traumatic wounds in the military.

Since retirement, Dr. Zamierowski has returned to the University of Kansas Medical Center, where he worked with, and supported, the programs for simulation and interprofessional education and the scholars exchange program.

He is now mentoring bioengineering students in their Capstone project through the School of Physical Therapy and working in the Diabetes Research Lab, where his first co-authored paper is now published. He has also worked with the KU School of Nursing, enabling research projects in cognitive behavior assessment.

The Honorary Alumnus Award is presented to individuals who have had significant impact, through their professional or personal contributions, to the missions of the KU School of Health Professions, the KU Health Professions Alumni Association and/or the provision of healthcare or healthcare education.