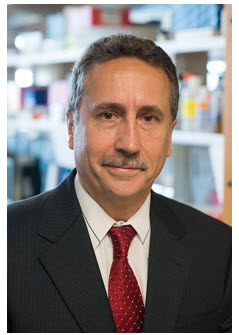 Andrew K. Godwin, PhD is the Chancellors Distinguished Chair in Biomedical Sciences endowed Professor and Division Director of Genomic Diagnostics in the Department of Pathology at KUMC. He also heads our institutional efforts in precision medicine. He was awarded an $11.5 million Centers of Biomedical Research Excellence (COBRE) grant from the NIH/NIGMS in 2019 to develop the Kansas Institute for Precision Medicine (KIPM) at KUMC.

Dr. Godwin was recruited to KUMC as the Associate Director for Translational Research for the KU Cancer Center in October 2010 after 26 productive years at Fox Chase Cancer Center in Philadelphia, PA and his engaged participation contributed towards NCI designation in 2012, resulted in him being named the Deputy Director in 2013. He serves as professor of Pathology and Laboratory Medicine and the founding director of Clinical Molecular Oncology Laboratory, a CLIA-certified, CAP-accredited molecular diagnostics laboratory for the KU Health System. Dr. Godwin also serves as the founding Director of both the KU Cancer Centers’ Biospecimen Shared Resource and the KU Medical Center’s Biospecimen Repository Core Facility, as well as the founding Scientific Director for the Biomarker Discovery Laboratory (BDL) which support integral and integrated biomarker studies for clinical trials.

Dr. Godwin holds secondary appointments as a Professor in the Department of Cancer Biology, the Department of Internal Medicine, and the Department of Microbiology, Molecular Genetics, and Immunology at KUMC and is an adjunct Professor for Bioengineering Program at the University of Kansas. He was named a Kansas Bioscience Authority Eminent Scholar in 2010, the University of Kansas School of Medicine Chancellor’s Distinguished Chair in Biomedical Sciences Endowed Professor in 2012. In 2014 Dr. Godwin received the KUMC School of Medicine’s Achievement Award for the mentoring of post-doctorate students. Of his awards, he is most proud of being acknowledged for his years of mentoring.

Dr. Godwin is a leader in the field of translational research and precision medicine, and his laboratories at KUMC continue to focus on various aspects of both basic and translational research, with an emphasis on early detection of cancer, predictive and prognostic biomarkers, liquid biopsies based on extracellular vesicles, molecular therapeutics, companion diagnostics, clinical trials, cellular therapeutics, cancer immune microenvironment and biosample ascertainment. He is a NIH/NCI/NIGMS funded investigator (continuously since his first faculty appointment at the Fox Chase Cancer Center in 1993) and a highly published (> 500 manuscripts and scholarly review articles) and cited (> 65,000; h-index of 130) scientist. Dr. Godwin is internationally recognized for his molecular biology/genetic studies of sarcoma (e.g., GIST and Ewing Sarcoma), breast and ovarian cancer, and his efforts to help bridge the gap between basic and clinical science to improve patient care. Dr. Godwin co-leads the ovarian cancer program at KUCC and has been the Translational Science Co-chair for many Gynecologic Oncology Group (GOG, now a part of the NRG) clinical trials evaluating molecularly targeted agents in recurrent ovarian and endometrial cancer patients. He is a member of the Early Therapeutics and Rare Cancers Committee and is the Vice Chair of the Breast Translational Medicine subcommittee of the Southwest Oncology Group (since 2019). Dr. Godwin was appointed to the National Cancer Institute’s NCTN Core Correlative Sciences Committee (NCTN-CCSC) in 2021. He led the first studies to demonstrate that KRAS mutations were predictive of response to EGFR targeted therapies (in collaboration with Bristol Myers Squibb) and was involved in the validation studies for the first and only clinically validated, FDA-cleared test for capturing and enumerating CTCs (CELLSEARCH®)  in collaboration with scientists at Immunicon (now Menarini Silicon Biosystems) to help inform clinical decision making. His recent studies have focused on developing liquid-based biopsies to detect, diagnose, and track disease burden.

He was a member of multiple disease-working groups for The Cancer Genome Atlas (TCGA), is a tissue source site for the Clinical Proteomic Tumor Analysis Consortium (CPTAC), is a member of the Early Detection Research Network (EDRN), the Breast Cancer Association Consortium (BCAC), and the Consortium of Investigators of Modifiers of BRCA1/2 (CIMBA).  Dr. Godwin serves on the Early Therapeutics and Rare Cancers Committee and was named the Vice Chair for the Breast Translational Medicine subcommittee of the Southwest Oncology Group in 2018. He has served on numerous grant peer-review panels, including those for the American Cancer Society, the National Institutes of Health, the U.S. Army Medical Research and Materiel Command, and the Mary Kay and Susan G. Komen Foundations. Dr. Godwin is active in ovarian cancer advocacy and served on board of directors for various for cancer foundations. He has demonstrated a consistently high level of funding throughout his career from Federal, State, and private sources. He has literally been part of over 200 successful grant awards totaling 100’s of millions of dollars of grant funding.

Ongoing efforts in Godwin's Research Program which include scientists at all levels of experience.