Our major research interest is to study the regulatory mechanisms by which pluripotent mesenchymal stem cells differentiate into osteoblasts (bone-forming cells) or chondrocytes (cartilage-forming cells) and their roles in bone/cartilage regeneration and specific diseases. Currently, research in our laboratory is focused on the following projects:

Project 1: The role of bone sialoprotein (BSP) in osteoblast differentiation and bone regeneration

Bone sialoprotein (BSP) is one of the major non-collagenous extracellular matrix (ECM) glycophosphoproteins in bone and tooth. BSP is highly expressed in developing and postnatal regenerating bone, but its precise function is largely unclear. Our preliminary studies demonstrated that implantation of BSP with reconstituted type-I collagen, but not collagen alone, stimulated osteoblast differentiation and bone formation (osteogenesis) during the repair of cranial bone defects. In contrast, no bone formation was observed when BSP-collagen was implanted into the thoracic subcutaneous soft tissues (Figures 1 and 2). 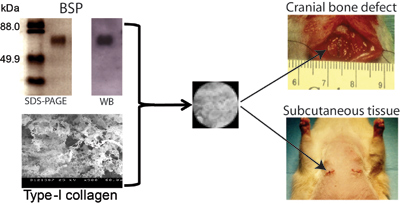 Figure 2. BSP-collagen, but not collagen alone, stimulates new bone formation in the central regions of rat cranial bone defects. However, no bone formation was observed when BSP-collagen was implanted into the thoracic subcutaneous soft tissues. Note the new bone (nb) synthesized in the bone defect is distinguishable from the host bone (arrow) and from the periosteum-derived new bone (pnb).

The osteogenic bioactivity of BSP in stimulating bone regeneration is an unprecedented result; the mechanisms of tissue-specific BSP action remain unclear. The major goal of this project is to explore the molecular and cellular mechanisms of tissue-specific BSP action in osteogenesis and its application for enhancing bone regeneration. Successful completion of this project may advance our understanding of the mechanisms of BSP-specific biological activities, which will possibly lead to improved methods for the treatment of bone defects in humans. Moreover, understanding the cell type- and bony environment-dependent effects of BSP on osteogenesis may provide new insights into the long-standing question of why metastasis of BSP-expressing tumors is preferential to bone. This study was initially supported by the Orthopaedic Research & Education Foundation (OREF, PI: Jinxi Wang), and is currently supported by an NIH/NIDCR grant (1 R01 DE018713, PI: Jinxi Wang).

Osteoarthritis (OA) is the most common form of joint disease in middle-aged and older populations. No proven pharmacologic therapy is currently available to prevent the initiation or reverse the progression of OA, largely because the pathogenetic mechanisms of OA remain unclear. Recently, we discovered that mice lacking transcription factor Nfat1 exhibit normal skeletal development but display most of the characteristics of human OA (Figure 3). 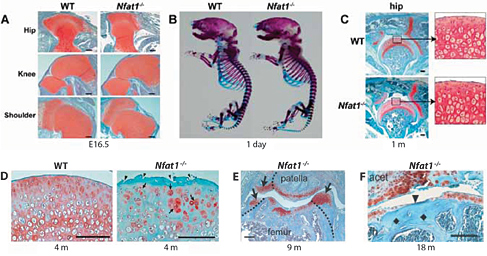 To explore the biological mechanisms of Nfat1 deficiency-induced OA, we have conducted the following preliminary studies.

ChIP assays were performed using chromatin prepared from articular chondrocytes isolated from femoral head articular cartilage of E16.5, 2-month, and 6-month WT mice and antibodies against H3K4me2 (a histone code associated with transcriptional activation), as well as H3K9me2 and H3K27me3 (histone codes associated with transcriptional repression). The binding level of co-immunoprecipitated DNA associated with histone methylation in each assay was quantified by qPCR analyses using three different primers (P1-3) designed from the sequences around the transcription start site (TSS) of the Nfat1 gene. A primer pair designed from the untranscribed genomic region located on mouse chromosome 17 (Untr17) was used as a negative control (Figure 5A). qPCR analyses of the ChIP samples using P1-3 revealed an age-related increase in H3K4me2 (Figure 5B) and an age-related decrease in H3K9me2 (Figure 5C), but no age-related change in H3K27me3 (data not shown). In contrast, qPCR using Untr17 control primer pair showed no detectable changes of H3K4me2 or H3K9me2 in this genomic DNA region (Figure 5B-C, P-ctl), confirming the specificity of the amplified PCR products for Nfat1-specificDNA sequences that areco-immunoprecipitated with H3K4me2 or H3K9me2. 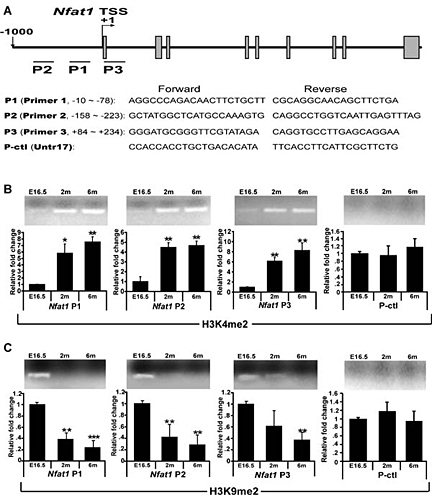 Taken together, these results demonstrate that age-dependent Nfat1 expression in articular chondrocytes is regulated by dynamic histone methylation, one of the epigenetic mechanisms in eukaryotic cells. 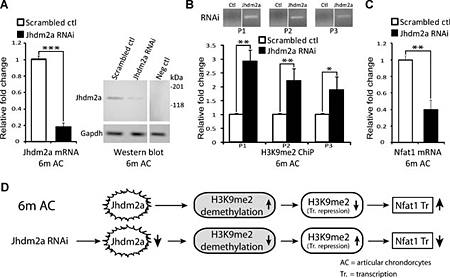 Figure 6. The transcription of Nfat1 gene in 6-month articular chondrocytes is positively regulated by Jhdm2a through demethylation of H3K9me2 at the Nfat1 promoter.

Our future studies will further explore the molecular and cellular mechanisms underlying the pathogenesis of NFAT1 deficiency-induced OA in adult mice and humans. This project is currently supported by an NIH R01 grant (1 R01AR059088, PI: Jinxi Wang).