The evolution of orthopedic surgery at the University of Kansas Medical Center closely parallels the history of the medical center itself. Although a basic science medical program had existed in Lawrence, Kansas, for some time, the roots of the Kansas University (KU) School of Medicine clinical program lay in three proprietary medical schools in the Kansas City area. These schools joined in 1905 to form the Kansas City area campus of the Medical School of the University of Kansas. During its first twenty years of existence, the medical school and hospital activities took place in two, and then three, small buildings on "Goat Hill", so designated because the incline to the facilities was significant and many complained it was more easily navigated by goats than people.

In the early years of the KU Medical School, student orthopedic lectures were given by part-time attending staff physicians whose orthopedic surgery experience and expertise varied greatly.

During the decades after 1930, there was a slow, gradual growth of KUMC. By 1950 the "corridor building," also known as "D" wing, was completed. The new space was important for orthopedics because they were now assigned office and clinic areas in the basement of the corridor building, an ideal, strategic location adjacent to the new Emergency Room (ER) that, in turn, was located one floor directly below the X-ray department. In those days, there were no primary ER physicians and orthopedists were often among the first to be called in the care of patients with multiple injuries, including fractures.

In 1946 the orthopedic residency program at KU was initiated. The resident applicants were individuals from a wide range of age and experience. There were no contracts, and applicants were accepted into the program after a single interview with the program chairman, followed by a handshake and subsequent formal letter of acceptance. It was well into the 1960's before a national residency matching plan was put in place and KU was approved to have two residents per year in the four-year residency training program.

In 1965, the orthopedic offices and clinic, along with other surgical subspecialties, were moved to the fifth floor of the outpatient Sudler building. These new facilities included a large conference room and private exam rooms separated by walls rather than draw curtains.

During the 1970's and 1980's, sub-specialties in orthopedic surgery grew and expanded across the United States and the world. Orthopedic surgeons were assuming major responsibility for treatment of fractures, which in the past were often managed by general surgeons. At the same time, orthopedic surgery was growing in scope and complexity signaling a new benchmark in the faculty recruitment and residency education at KU. With the development of many new and innovative instruments and treatment modalities such as arthroscopy, total joint replacement, spine instrumentation, knee ligament reconstruction, microvascular surgery and limb salvage procedures, the focus of recruitment of full-time faculty members has been orthopedists with sub-specialty fellowship training expertise.

In 1979, a new large clinical facility, officially named the University of Kansas Hospital was opened. The new operating rooms, clinical space, and private patient rooms improved the workspace substantially. As a reflection of the growth of and the demand for orthopedic surgery, the orthopedic surgery department was allocated two operating rooms daily and given the first choice for a third room when available.

In 1987, orthopedic offices were moved from the fifth floor of the Sudler building into new space renovated from the surgical recovery room and postoperative intensive care unit on the fifth floor of the old Bell Memorial Hospital "E" building. The renovated office area also included a library, a large conference room, a computer workspace for the residents, and a patient record room.

In its illustrious history, the Department of Orthopedics at KU has provided a steady, outstanding orthopedic service to a great many people in this region. Experience in a wide range of orthopedic sub-specialties has been developed in the department, including pediatric orthopedics, spine surgery, sports medicine, hand and microvascular surgery, foot and ankle surgery, adult reconstruction, and musculoskeletal oncology. In addition, an excellent well-rounded orthopedic training program has been developed that provides a steady stream of well-trained young orthopedic surgeons ready to enter any facet of academic or private orthopedic surgery. The department is very proud of the fact that since 1956 all orthopedic residency graduates have obtained board certification.

Note: A complete history, Evolution of an Academic Orthopedic Department, University of Kansas Medical Center 1905-2005, is available from the department.

For more information about the Department of Orthopedic Surgery and Sports Medicine please contact Bonnie Kopp at 913-588-7590 or bkopp2@kumc.edu 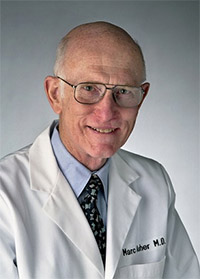 He graduated from Kansas State University BS 58 and the University of Kansas, MD 62. He completed post-doctoral training at the University of Oregon, Baltimore City Hospital, and a Fellowship at the Harvard Combined Orthopaedic Surgery Residency. His early career included work at the United States Public Health Service as the General Medical Officer in Leavenworth, KS and as an Assistant Professor of Orthopedic Surgery and Residency Training Coordinator at the University of Texas Medical School at San Antonio in 1970. In January 1972 Dr. Asher returned to his alma mater, rising from Assistant Professor to University Distinguished Professor in 2003. He published over 200 clinical and research papers in scientific journals. In October 2015 Dr. Asher published his book, "Dogged Persistence: Harrington, Post-Polio Scoliosis and the Origin of Spine Instrumentation" about his mentor, Paul R. Harrington MD, and Harrington's research in post-polio scoliosis.

Dr. Asher is survived by his wife, Elinor June Asher, and his daughter Janet Asher Vreeland and her husband Bob. His extended family was a major source of pride and inspiration for him.

As his final gift to the research he dearly loved, Dr. Asher willed his body to Department of Anatomy at the University of Kansas Medical Center.