The Adler Orthopaedic Society was established in 2011 to honor the work and legacy of Dr. Federico Adler. The mission of the society is to provide mentorship to those medical students at the University of Kansas School of Medicine interested in orthopedic surgery, as well as current KU orthopedic residents. 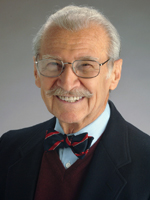 Dr. Adler lived a remarkable life. Born in Austria in 1929, he and his family escaped in 1938 just after the Nazi invasion and Kristallnacht. His extended family was destroyed. His parents settled in Quito, Ecuador. In 1955 Dr. Adler, with his wife Betty and two young daughters, moved to Kansas City where he joined the Orthopedic Surgery Residency Program at the University of Kansas Medical Center. Following a brief stint on the faculty, he was in private practice for 30 years, becoming Chief of Staff at Menorah Medical Center and caring for thousands of grateful patients. For the next 13 years of his "retirement", he practiced at the Veterans Administration Hospital, mentoring orthopedic residents and working with medical students. In 2006 Dr. Adler returned to his academic home at the University of Kansas Medical Center and pursued two lines of original research. One was aimed at better understanding the pathophysiology ARDS/Fat Embolism syndrome.

In 2007 he established the Betty and Fred Adler Resident Award Endowment at the Kansas University Endowment Association. Each year the orthopedic resident who has performed the most original research or made the most original contribution is recognized. His legacy lives on now through family, friends, colleagues, students and the Adler Orthopaedic Society.

Dr. Adler was a world traveler, having visited every continent and the Arctic Circle. Also an avid mountaineer, he climbed several major peaks including Kilimanjaro, Fuji, Elbrus, Cotopaxi and Chimborazo. Dr. Adler passed away quite suddenly in February of 2011.