Exploring how the brain puts thoughts into action by studying hand and arm movements.

Our lab is directed by Dr. Adam Rouse, an assistant professor and the director basic research in the Department of Neurosurgery.

We explore how the brain puts our thoughts into action. Healthy people use their arms and hands to make complex and precise movements while performing many activities of daily living. But people with neurological diseases or spinal cord injuries may be limited if their brains have trouble signaling their arms and hands to move. Neural interfacing technology, modern computer processing and robotics are leading to new ways we can help people with paralysis and movement disorders.

We collect and analyze large datasets looking at brain and spinal cord activity and behavior in animals, healthy humans and patients with neurologic disease. The number of nerve cells (neurons) in the brain and spinal cord that we can monitor simultaneously is growing rapidly and big data tools are allowing us to analyze and visualize the data in brand new ways. While in the past we may have only been able to say a neuron was connected to flex the elbow or extend the thumb, we now want to understand how a whole group of neurons work together to make coordinated movements like reaching and grasping, do it precisely, and make a corrective movement when needed.

Using advanced technology, we can monitor large numbers of nerve cells (neurons) in the brain and spinal cord in new and exciting ways. In turn, we can understand how groups of neurons work together to allow us to reach, grasp and perform other coordinated movements.

We are especially interested in how we can better use monitored neural signals to control external devices directly with brain-computer interfaces to restore lost function in people with paralysis and movement disorders.

Our experiments are designed to generate data that tests current computational models of the nervous system and we then create new computational models based on the experimental data. Because our lab is embedded in a clinical department, we interact with neurosurgeons and other clinicians regularly to address current, real-world health care challenges. 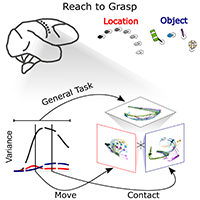 The speed-accuracy tradeoff has been observed in both sensory and motor systems across a wide-range of animals. Fitts's law is well known to describe the trade-off between speed and accuracy of natural human movement across many tasks. Yet it remains difficult to explain what in our brain causes these fundamental limits. While certain limitations in robots and brain-computer interfaces are similar, they often are slower and noisier with different trade-offs. We want to develop better descriptions of why the neurons in our brain limit our ability to move both fast and precisely. Then we'll work on developing new decoding algorithms for brain-computer interfaces that can more closely mimic the speed and precision of natural human movement.

One area of motor precision we are particularly interested in is the relationship between target-independent and target-dependent neural signals. When we want to move our arm and hand, many neurons in the motor areas of the brain and spinal cord become active with any movement – a target-independent signal. Additionally, different neurons become more or less active to signal which direction you want to move – the target-dependent signal. Currently, it's often difficult to tell what part of any individual neuron's change in activity is linked to signaling a particular movement versus changes that happen for any movement just because the brain area became more active.

Recent results in our lab have shown the target-independent activity appears as a repeated pattern across a network of neurons with consistent timing that divides a movement into a set of submovements. We are further examining whether this is always the case or if there may be exceptions and how the timing of submovements influences one's ability to correct to incoming sensory information. 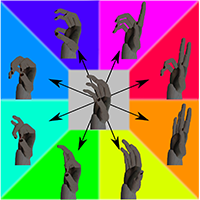 We use our hand to perform a diverse set of movements. Many of these are grasping movements where the thumb and fingers must coordinate to contact an object in a precise and balanced way. When designing robots and brain-computer interfaces, it's easiest to think of each digit of the hand as a separate degree-of-freedom each with a separate control signal. Yet, when we move through our everyday lives, we rarely are consciously planning and aware of which digits we should use and how much to move each one.

In the lab, we are developing new mathematical descriptions of how the brain organizes and maps a concept of a particular grasp to then signal down the spinal cord to activate the individual muscles that move each joint. We're interested in identifying how neurons in the brain might organize and represent grasps as both:

This mixture of being able to think in both categorical as well as continuous variables is a key aspect of not just hand movements but many forms of cognition and a common modeling challenge in computational neuroscience.

Our lab is actively collaborating with clinicians at the Level 4 Epilepsy Center at The University of Kansas Health System. We are analyzing MRI and CT imaging to improve the surgical management of patients with epilepsy. We are also exploring new ways to analyze brain signal recordings — electroencephalograms (EEG) — to better identify the onset and location of seizures.

In collaborating with Dr. Sherwin Chan at Children’s Mercy Hospital, we are examining how machine learning algorithms can improve early detection of disease with imaging.  We’re especially interested in how we can use lower-cost and portable devices such as ultrasound and low-field portable MRI to get similar information to larger imaging or invasive procedures.  Two current applications we are exploring are detecting and monitoring hydrocephalus in neurological patients and detecting artery stenosis in liver transplant patients.

The Department of Neurosurgery at the University of Kansas Medical Center is grateful for the generous support of the research of Adam Rouse, M.D., Ph.D., by the Frank L. and Evangeline A. Thompson Opportunity Fund at KU Endowment.