The Teachenor-Williamson Society inspires our present and future excellence by honoring our past greatness. 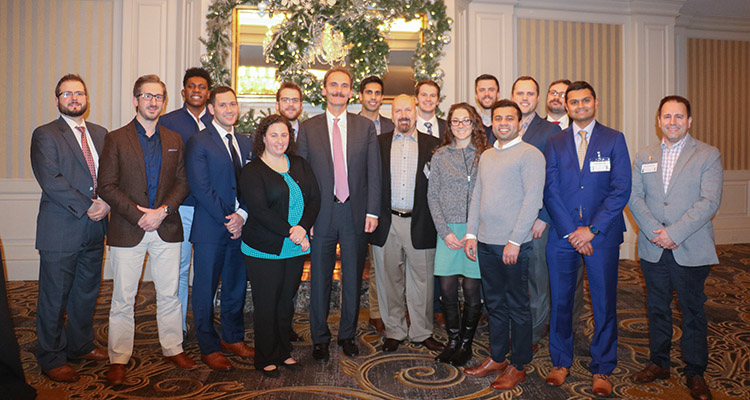 The Teachenor-Williamson Society is made up of our talented alumni, generous supporters and great friends of the Neurosurgery program. Named for Frank Randall Teachenor, who founded our department, and William P. Williamson, who served as our program's first full-time chair, the society honors our long-standing tradition of excellence and serves as a constant reminder of the high standards to which we aspire.

Frank Randall Teachenor founded the Section of Neurological Surgery at the University of Kansas Medical Center in 1924. A gifted physician widely respected for his surgical prowess, modesty and quiet manner, he was Kansas City's only neurosurgeon in the 1920s and the sole practitioner between St. Louis and San Francisco during that time.

Teachenor was born in 1888 in Kansas City, Missouri. After graduating from the University of Kansas School of Medicine in 1911 and completing a one-year internship, he joined the Kansas City-based practice of then-world renown surgeon, Jabez Jackson, M.D. He trained in neurosurgery, as did others at the time, by attending courses conducted by many of the country's leading neurosurgeons, including Charles Frazier and Harvey Cushing, the father of American neurosurgery.

After 23 months of military service as an Army surgeon in World War I in France, Teachenor returned to Kansas City and established a neurological surgery practice that included William P. Williamson, who would succeed him in 1951 as head of neurosurgery at KU Medical Center.

William P. Williamson, M.D., served as the first full-time chief of neurological surgery at the University of Kansas Medical Center.

Born in Monticello, Arkansas, in 1916, Williamson graduated from the University of Arkansas Medical School in 1938. He trained in surgery and neurosurgery at Henry Ford Hospital and the Neurological Institute at Columbia University.

In 1945, Williamson was recruited by Dr. Frank Randall Teachenor to join him in practice and at KU Medical Center. When Teachenor retired from his post at the university six years later, Williamson was named as his successor. He later penned a biography about his predecessor, Teachenor.

Known as a brilliant lecturer, diagnostician and surgical technician, Williamson was so widely respected by medical students that, despite limited contact in this subspecialty, they selected him as the recipient of the first Jayhawker MD award. The honor recognized "the faculty member who has shown the greatest devotion to his primary duty as teacher of medical students."

Williamson's tragic and untimely death in 1967 was a great loss to KU Medical Center and the profession.

To further recognize the legacy of scholarly comradery of our pioneering early leaders, Dr. Teachenor and Dr. Williamson, the department began the Teachenor-Williamson Society Symposiums in 2012. The event recaptures the spirit of the Frank R. Teachenor Lectures hosted by the department between 1958 and 1969.

The symposium features a keynote speaker and a slate of educational talks. Faculty, residents and alumni; local and visiting neurosurgeons; friends of the Department of Neurosurgery; and distinguished guests interested in the clinical neurosciences are invited to attend.