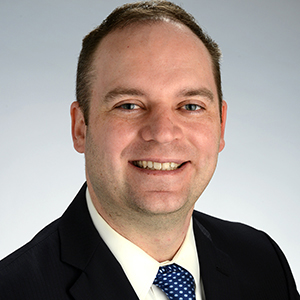 A neuroscience researcher at the University of Kansas Medical Center is using a grant from the National Institutes of Health to gain a deeper understanding of how the brain manages precise movements of the hand and arm. The grant also will explore effective ways of building brain-computer interfaces that better mimic natural movement.

Adam Rouse, M.D., Ph.D., director of basic research in the department of neurosurgery at KU Medical Center, earned a five-year K99/R00 NIH Pathway to Independence award. He is launching the three-year $750,000 R00 phase of the grant after completing two years of data gathering at the University of Rochester during the K99 phase of the award.

As part of the research project, Rouse will decode recorded brain activity and use that information to determine how well a cursor on a computer screen can be controlled. He also will perform perturbation experiments during which subjects' motion will interrupted, forcing them to make corrective movements.

"If we're able to record from a lot of neurons in the brain, we can better recognize patterns and use machine learning techniques to better understand when you will move slowly versus when you want to move quickly and don't have to be more precise," Rouse said. "We're looking for ways to use more information from a large number of neurons to control any one degree of freedom, rather than having this simple linear model."

This current phase of the project is built on results from the initial phase of the study. The most significant finding from that earlier work indicated that subjects completing a series of natural reaching tasks made an initial movement followed by smaller submovements or corrective movements rather than making a single continual aiming or reaching motion.

Rouse's research is anchored in Fitt's Law, which suggests people move more slowly when their movements need to be more accurate, creating a speed-accuracy tradeoff.

"I'm interested in what in our brain causes us to have that tradeoff, and why we're able to do things very fast, but also very slowly and precisely, which is something that's very difficult for robots or machines to do," Rouse said. "Most brain-computer interfaces tend to have just one kind of speed. Obviously, they're getting better with robots in some of these areas, but I think it's probably different strategies than what our brain uses."

While the immediate goal of the study is to try to improve brain-computer interfaces that will allow people with paralysis to better control a cursor or robot, there are other potential applications of this research.

"It's also going to be helpful for lots of other neuroscience goals, whether it's thinking about rehabilitation or assistive devices, and for a better understanding of how the brain does all these complex things. Not to mention, we'll hopefully come away with a better understanding of how to better use all the data we can now collect related to brain activity," Rouse said.

The NIH grant will help jumpstart the newly established Precision Neural Dynamics Lab, which is under Rouse's direction. The lab, which is currently recruiting graduate students, also expects to partner with the department of neurology at KU Medical Center to study patients with epilepsy to gain a deeper understanding of the condition and pinpoint more effective ways to identify seizures.

Rouse also is working with the bioengineering department on the University of Kansas campus in Lawrence.