Frank DeStefano, D.O., and Heather Minchew, M.D. will begin their residencies in July. 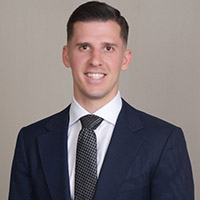 The Department of Neurosurgery at the University of Kansas Medical Center chose Frank DeStefano, D.O., and Heather Minchew, M.D., as new residents beginning the 2022-23 academic year.

Experience with traumatic brain injuries sustained by his grandfather and a close friend in a motorcycle accident and a motor vehicle accident, respectively, initially sparked DeStefano’s interest in neurosurgery. Seeing the strides the specialty made between the two accidents, he realized he wanted to have direct responsibility for caring for this type of patient and aspires to help restore form and function in people with neurologic pathologies.

DeStefano earned his medical degree from the Kansas City University School of Osteopathic Medicine, where he graduated in the top 1% of his class. In medical school, he was awarded the KCU COMLEX Level I and Level II Excellence scholarships for students with COMLEX Level I and II scores in the 10% of the class. DeStefano is a member of Sigma Sigma Phi, the national osteopathic medicine honor society, and is credited with 15 peer reviewed papers, a book chapter and several presentations. He holds an undergraduate degree in biochemistry and molecular biology from the University of Iowa. 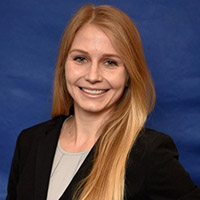 Minchew’s interest in neurosurgery and passion for the brain initially grew out of experiences with soccer players sidelined by concussions. She expanded that passion as an undergraduate at the University of Pittsburgh, where her mentors encouraged her to conceptualize and design traumatic brain injury research projects while she completed a bachelor of science in neuroscience.

Minchew earned her medical degree at the University of Kansas Medical School, where she continued to pursue her research with a $25,000 Frontiers KU Clinical and Translational Science Institute grant. Minchew founded Women in Surgery Leadership Development at KU Medical Center and was a pre-surgery clerkship panelist and mentor. She served as executive director of CAMP, a near-peer anatomy and surgical skills workshop for third-year medical students launched in 2020 by KU Medical Center medical students to bolster their surgical anatomy curriculum. Minchew has published multiple research articles, including some with residents and faculty members in the Department of Neurosurgery.

DeStefano and Minchew will begin their residencies in July.

For more information about the Department of Neurosurgery residency program, visit the department’s website.