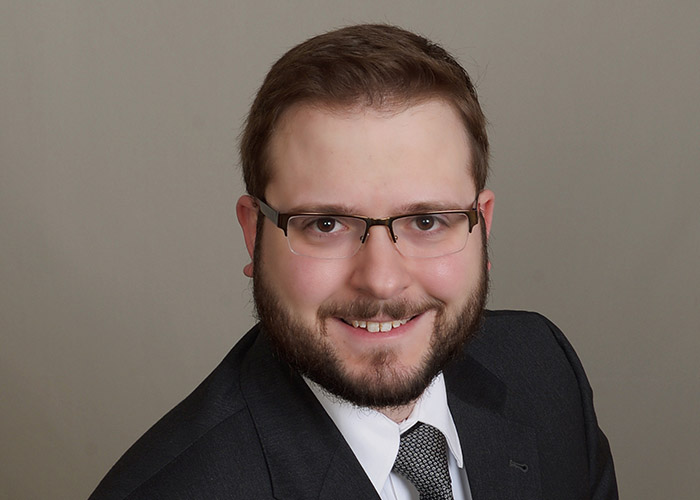 As an aspiring neurosurgeon and a resident in the Department of Neurosurgery at the University of Kansas Medical Center, Domenico Gattozzi, M.D., knows his way around an operating room. As an accomplished classically and jazz trained musician, he's just as at home sitting at a piano.

Gattozzi was one of 10 medical students, residents and faculty members featured in the first arts showcase presented by the Office of Graduate Medical Education at KU Medical Center. The event included paintings, metal works, illustrations, photography, poetry, music and knitting.

"Collage," a studio-recorded jazz CD by Gattozzi, was played during the showcase. Produced in June 2014, the 10-track compilation of original music written by Gattozzi includes piano, bass, drums, saxophone and a vocalist. In addition to two other studio CDs, "How Big Is Your Circle" with artist Jeff Moyer and "Memorare," he has more than a dozen live recordings to his credit.

"It is important for healthcare providers to be reminded about what defines us outside of our profession," Gattozzi said. "This showcase served as a way for me to share my love for music."

Introduced to piano at age 5 and classically trained, Gattozzi developed a passion for jazz after attending a camp his junior year of high school and hearing another participant playing gospel music.

"I thought to myself, ‘why can't I play that after all the years I've been doing this?' You're always taught that stuff is easier to play, but I found it harder," he said.

Motivated by a desire to excel, he began taking jazz lessons during the last two years of high school and went on to major in jazz piano at the University of Texas at Austin, where he also continued his classical training.

Over the years, Gattozzi has performed both solo and with bands, including appearances at the annual South by Southwest Festivals in Austin, as well as at a jazz festival in Europe.

A demanding residency doesn't leave much time for Gattozzi to pursue his music now, but he still finds ways to incorporate it into his life.

"It's definitely a stabilizer. I can always go home and just play the piano and think of something else, and I think it's important to have that balance," he said. "It's something I enjoy, just listening to music when I get a chance."

While Gattozzi likes listening to jazz and playing it at home for his wife and two children, he does see a connection between music and his chosen profession.

"In jazz, there are rules, but there is a lot of personality you can put in the music through your improvisation, and I think just like in neurosurgery, there are rules and ways you do procedures, but you learn your style, what works best, what instrument works best or what's safest in your hand or for a certain patient," he said. "I guess if you wanted to get metaphorical, you could say it's sort of like a jazz performance."

GME partnered with MedIntima, a medical student group, to present the showcase. The Dec. 3 event was aimed at spotlighting students, residents, fellows and faculty beyond their roles at KU as well as highlighting the importance of having an outlet for creativity.