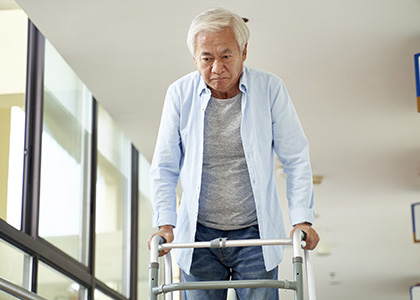 Fitness used to be Keith Jones' thing, at least until work, life, and then a stroke knocked him off his stride. Now the stroke survivor is using exercise to help get his groove back with some assistance from researchers at the University of Kansas Medical Center.

Experts at KU Medical Center are exploring the link between exercise and stroke recovery through the High-Intensity Interval Training (HIIT) study, a five-year National Institutes of Health-funded multisite clinical trial aimed at pinpointing the right amount and intensity of exercise that will benefit survivors. It's currently one of the few large stroke rehabilitation and recovery clinical trials ongoing nationally.

"This study compares moderate intensity exercise to high intensity interval training to see which is better for improving walking endurance after stroke. The goal of this trial is to really look at whether there's a certain intensity that is better for improving walking after stroke," said Sandra Billinger, Ph.D., PT, the study site's principal investigator and director of the Research and Exercise and Cardiovascular Health, or REACH, lab at KU Medical Center. "I'm really excited to be a part of this multisite trial and bringing stroke recovery research to Kansas City."

As part of the 12-week intervention, research participants work with a licensed physical therapist performing either moderate-intensity continuous exercise or high-intensity exercise on both treadmills and over-ground walking in the laboratory.

"The idea behind the HIIT study is to figure out if there's a specific exercise dose that helps people recover their ability to walk after a stroke," Billinger said.

Back to the basics

Before his April 2015 stroke, Jones had been an avid runner, with six marathons and countless shorter races to his credit. Little by little, he'd gotten away from those healthy habits, in part as a result of a growing lack of work-life balance. He was in the middle of an appointment with his eye doctor when he had a stroke. Thankfully, he was only a few blocks from a hospital and rapidly received life-saving care.

Part of Jones's recovery included recommitting to those healthy habits such as physical activity and eating nutritiously. After learning about the HIIT study during a presentation at a Kansas City area support group for stroke survivors, Jones inquired about participating in the clinical trial and discovered he was eligible. In early 2019, he began working with the HIIT research team.

"I got a chance to learn even more about fitness, things I didn't anticipate. It was fun," Jones said. "The further we got into the study, and the further they saw what I could do, it was about what I could do to kind of grow with it."

For Jones, one of the most important takeaways from his clinical trial experience was learning the benefits of varying his exercise duration and intensity.

"I found out, wow, short bursts of running based on what you can do is actually a benefit towards me as I've gotten older," Jones said. "I'd always thought short bursts were for people that don't want to do big stuff like marathons or half marathons. This study gave me an opportunity to kind of look into that, based off the exercise prescription that Dr. Billinger and her team were setting."

Researchers at KU Medical Center hope the HIIT trial will ultimately translate into a clearer road map to prescribe the optimal exercise dose for stroke recovery.

"This trial is providing insight about which exercise to prescribe for walking recovery," Alicen Whitaker, DPT, a graduate research assistant in the REACH lab and the lead physical therapist for the HIIT study. "This study is also aimed at showing that even years after a stroke, individuals can do this exercise program and hopefully improve their walking."

People after stroke often think they can't or shouldn't exercise, but research has proven that when it comes to both preventing and recovering from stroke, physical activity is one of the best prescriptions out there. In fact, May is both Stroke Awareness Month and Exercise is Medicine Month.

There is an ongoing need for research around the role of exercise on brain health, though. Previously published data by Billinger and her team has helped shed light on the critical link between physical activity and the brain function. Specifically, the study showed that in people after stroke, their brain's response to exercise was much lower in the stroke-affected side compared to their age- and sex-matched peers who were sedentary.

However, in the same study, individuals who were physically active had a much more normal response to exercise on their stroke affected side compared to their age- and sex-matched peers who were sedentary.

"I think our research points to the importance of physical activity after stroke to maintain vascular health and brain health," Billinger said.

Currently, there are few active regional and national trials centered around stroke rehabilitation and recovery, though experts hope that will change. However, stroke rehabilitation and recovery continue to be strong areas of interest for researchers as they continue to pursue answers to key questions such as how the brain recovers from stroke, what facilitates recovery, what helps survivors' ability to walk and which survivors respond best to different recovery protocols.

In the meantime, researchers are certain following healthy lifestyle guidelines is critical to maintaining brain health.

"Heart health equals brain health," Billinger said. "All the things we can do to keep our hearts healthy, such as making sure we're at a healthy weight, being physically active, watching our blood pressure, getting sufficient sleep and managing our risk factors also benefit brain health. That's a really important message."

The University of Cincinnati and the University of Delaware are the other two sites offering this trial. For more information or to ask about eligibility, contact Jaimie Ward at 913-945-6630 or email reachlab@kumc.edu.