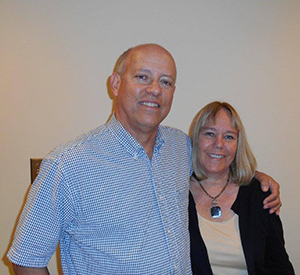 Dave Burkett, pictured with his wife of 46 years, Iley, retired April 3 after 16 years as a social worker in the neurology department.

That's what Dave Burkett thought, and even commented on, during his interview for the social work position in the Department of Neurology at The University of Kansas Health System. His experience as both a case worker and a psychotherapist made him a strong match for the demands of the role as the department's only social worker.

"I was pleased to work in a system that valued not only the physical needs of our patients, but also the psychological, social and spiritual elements for which I feel I was uniquely trained," he said.

Although over the years, other social workers were added in specific areas of the neurology department, Burkett remained the only one for the entire department. Serving as a case manager for the department's clinics was a highlight of his career.

"I could never imagine when starting my job that I would have a front row seat in witnessing a life drama involving so many patients, including my best friend from childhood, who died from ALS in 2016, and many other neighbors, past co-workers, and friends with the same or different neurological conditions, often with similar fates. In fact, both my parents were KU patients, and suffered from dementia at the end of their lives, while I was at KU," he said.

As part of his role, Burkett also provided intensive counseling and case management with the University of Kansas Alzheimer's Disease Center, as well as offered meditation and support group services. In addition, he used his specialized training with tic disorders, known as Comprehensive Behavioral Intervention for Tics, to assist patients. Though his position was principally clinical, he did engage in a limited amount of research on psychosocial topics and served as a practice instructor for students pursuing master's degrees in social work.

Burkett always figured he'd slide into retirement, and that's exactly what he plans to do. The next chapter will include a mix of business and pleasure as he maintains a small private practice, working with clients either by phone or online, while also finding time to garden with his wife, Iley, of 46 years. Meanwhile, his longer-range plans include spending more time with his two grandsons, vacationing both domestically and abroad, bike riding with family, attending sporting events, visiting art galleries and museums, and watching movies.

"It has been a great privilege to be of service to all of the patients and family members with whom I worked," he said.