The department annually recognizes an outstanding senior medical student who is pursuing a career in neurology with the award named in honor of Dewey K. Ziegler, M.D., its first chair and professor emeritus. 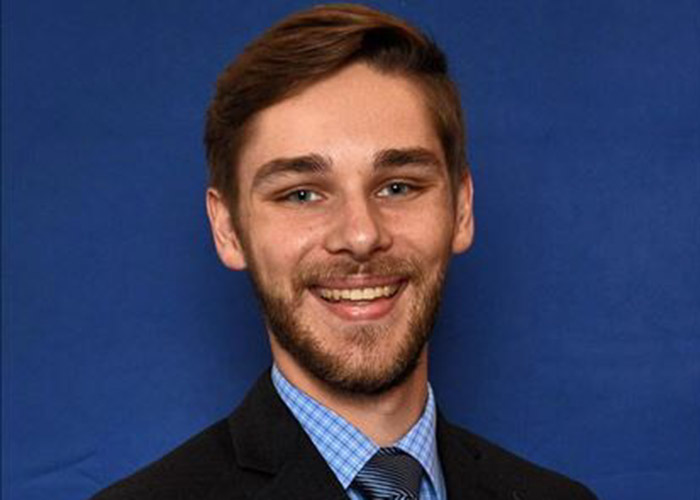 As a medical student in the KU School of Medicine, Samuel Broll, M.D., remembers being excited about starting his clinical rotations. But the moment he stepped on the neurology floor, he felt especially comfortable speaking with patients and their families. Broll attributes the confidence to his experience as an undergraduate student when he worked as a certified nurse aide in a long-term care facility, where he cared for people with Alzheimer's disease, Parkinson's, stroke and other advanced memory issues.

"Every time I saw a new patient in neurology, it reminded me of someone I had taken care of in the past and showed me how much I loved neurology, and that I would be happy doing it the rest of my life," he said.

The passion and commitment for the specialty Broll has shown throughout medical school made him a terrific choice as the 2021 Dewey K. Ziegler Neurology Award. Presented by the Department of Neurology at the University of Kansas Medical Center, the annual honor is given to an outstanding senior medical student who is pursuing a career in neurology.

"What means the most to me about this award is the legacy of the Ziegler name. The impact Dr. Ziegler had on this department to shape it into what it is today cannot be understated. Additionally, it is such an honor for me to be recognized by the department that helped me develop my love of neurology, has mentored me in my career goals, and where I will complete my residency training," Broll said. "I feel so fortunate to be surrounded by so many supportive physicians here at KU, and I know that Dr. Ziegler would be so proud of the department he helped found. I would also like to thank Dr. Ziegler's family for being present at the award ceremony honoring his legacy as well."

As a medical student, Broll worked as student physician in the JayDoc free clinic and volunteered as a mentor for high school students at the Kansas City Trombone Workshop. He also helped designed a neuroimaging curriculum for M3 students as part of their Neurology clerkship. In addition to aspiring to become a general neurologist in rural Kansas after he finishes his residency, he is leaving open the possibility of an eventual return to academic medicine.

Broll earned a bachelor of science degree biochemistry at Kansas State University before completing his medical degree at the KU School of Medicine. He will complete his residency at KU Medical Center.

As Broll looks ahead, he offered words of wisdom for others seeking to follow in his footsteps.

"I think the most impactful thing I was told was that no one strategy is going to work for everyone. Just because Person A thrives with this particular study tool, does not mean it will work for Person B. The most important thing is to get many diverse opinions and apply little parts of their advice to see what works for you," he said. "Not only will this help you keep an open mind about new information, but I think it will also prepare you to think critically for the rest of your career regardless of what field you might end up in."

The Dewey K. Ziegler Award recognizes its namesake's more than 50 years of service to neurology and to KU, including serving as the department's first chair from 1966 to 1984 and professor emeritus from 1990 until his death in 2012. Ziegler also served a term as president of the American Academy of Neurology.