Resident enjoying her unconventional journey to becoming a neurologist

Gloria Ortiz, M.D., is on track to achieve her dream of a career in academic medicine 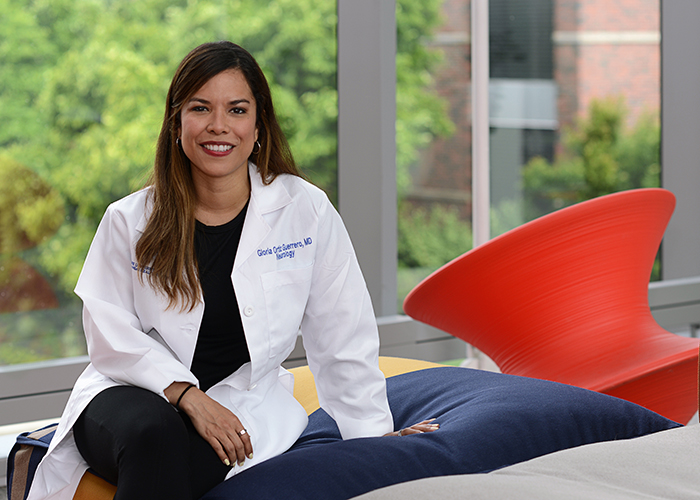 Fourth-year neurology resident Gloria Ortiz, M.D., is taking an unconventional route to her dream of a career in academic medicine.

Perhaps more than most, Gloria Ortiz, M.D., is looking forward to 2023.

That’s when she’ll reach another major milestone on her unconventional path to achieving her dream of a career in academic medicine: Graduating from her residency in the Department of Neurology at the University of Kansas School of Medicine, then embarking on a two-year epilepsy fellowship at the Mayo Clinic in Rochester, Minnesota.

In a future that’s less and less distant, she pictures herself working in a teaching hospital, dedicating her time to working as a clinician and a researcher, and leaning into her love of teaching. The fourth-year resident is one solid step closer to making that goal a reality, despite traveling over more than a few rough patches that may have delayed but never derailed her journey.

“Some people achieve their goals faster, others like me have to sacrifice so many things, including being close to loved ones,” she said. “I’m happy that I’m achieving my personal and professional goals to help others. I’m one hundred percent sure all my hard work will pay off.”

Ortiz set her sights on becoming a neurologist as a medical student at the Universidad del Rosario in her native Colombia, with plans to practice in her home country, where she could remain close to family, friends and her culture. But after working as a general practitioner for a few years, she recognized she needed a new plan if she wanted to truly fulfill her dream.

“I am very passionate about delivering the best care to my patients, but I faced some limitations due to the lack of access in our health system. In addition, few positions are offered to perform a medical residency in Colombia narrowing the chances to pursue your goal,” she said. “In order to pursue the best medical education, I made my decision to come to the United States.”

That decision triggered a series of challenges that Ortiz spent more than three years doggedly navigating. The biggest hurdle was the language barrier. Shortly after transplanting to the United States in January 2016, she quickly realized the English classes she’d taken in Colombia wouldn’t be enough to help her establish a medical career in America. To strengthen her language skills, she enrolled as a full-time student at a community college, while simultaneously studying to pass the United States Medical Licensing Examination (USLME), a three-step examination to certify her medical degree in the U.S. To further complicate matters, her limited English vocabulary forced her to study with a dictionary to understand all the medical terms.

It was a slow march, but Ortiz eventually passed all the USMLE steps, and confident in her improved English skills, she turned her attention to finding a position as a researcher in the Kansas City area. Of the 30 email inquiries she sent, only the neurology department at the KU School of Medicine responded. In addition to helping her land a position as a visiting researcher in neuromuscular medicine, the department equipped her with the tools to be successful and steered her to meaningful research projects. She ended up presenting the results of these projects at local and national meetings. She also shadowed attending physicians and fellows in the outpatient clinic and attended Grand Rounds lectures.

After a year, she wanted to gain more experience in a different specialty and found a home with epilepsy. She quickly took on large projects such as developing a database of different epilepsy surgical procedures at KU aimed at achieving seizure freedom or better seizure control, which she presented at an American Epilepsy Society Annual Meeting.

In the spring of 2019, Ortiz was matched to the neurology residency at KU School of Medicine, moving her ever closer to her dream.

As Ortiz continues to hone her training as a neurologist in residency, her supervisors report she is rounding into an exceptional researcher, whose interests include racial and ethnic disparities in epilepsy care as well as surgical epilepsy outcomes.

“Dr. Ortiz is very dedicated and hardworking. She is a quick learner and very interested in learning and completing the tasks she takes on,” said Mamatha Pasnoor, M.D., neurology professor and director of the residency program. “Her interest in research was evident even prior to joining the residency program. She worked as a research assistant on a neuromuscular project looking at repeated nerve stimulation in myasthenia gravis patients with me and another faculty member, Dr. Mazen Dimachkie. She did not take long to learn all about the nerve conductions and the more complicated neuromuscular junction physiology and was able to collect the data, analyze and publish it.”

Ortiz’s current study is looking at the racial and ethnic disparities using urine toxicology screening in people with suspected seizures who are evaluated in the emergency department. The project won the department’s 2021 Research Day Award for second-year residents. During the annual Research Day event, neurology residents and fellows present projects they developed in collaboration with faculty mentors. One resident from each postgraduate year and a fellow are chosen for the best project and presentation. Now Ortiz Guerrero and her other co-authors are developing a manuscript outlining the study and discussing its results with a goal of publishing the manuscript in a high-impact journal.

Meanwhile, one of her earlier projects, the epilepsy surgical database, is still in use and several residents have implemented it for different projects allowing staff and residents to track the number and types of epilepsy surgeries performed each year and their outcomes.

With graduation and an epilepsy fellowship on the near horizon, Ortiz said her patients keep her motivated.

“I want to improve their quality of life so they can find meaning in their lives,” she said.

Ultimately, Ortiz is open to whatever opportunity awaits her once she’s completed her fellowship. Whether that opportunity is in the United States or back home in Colombia, she wants to eventually start a surgical epilepsy program in her native country. In the meantime, she is taking one year at a time and urges anyone aspiring to follow in her footsteps to pace themselves.

“Be patient. Be humble. Don’t compare yourself with others,” she said. “Ultimately, enjoy your path while you achieve your goals.”