Professor Arthur Dick, M.D., retires after 50 years of service including helping to build neurology field and establish department at KU 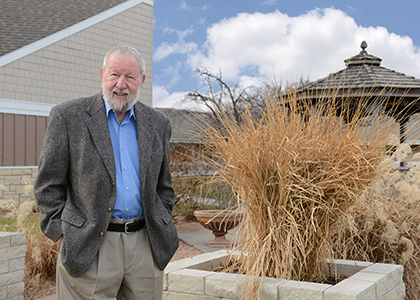 Arthur Dick, M.D., remembers the first time someone called him doctor. It was 1965, and he was on his first day as an internal medicine intern at the University of Kansas Medical Center. He was wearing his neatly pressed short white coat and sporting a fresh haircut as he stepped onto the fourth floor of what is now Delp Pavilion.

Since then, Dick has been referred to by his professional title thousands of times over the course of an extraordinary decades-long career as an outstanding physician, educator and researcher. The highly respected and beloved professor in the Department of Neurology retired in September after 50 distinguished years at KU Medical Center and service to the field of neurology.

"There are so many [memories], but being part of the residency program and later helping to direct that program and direct the department was an enormous priviledge," Dick said. "The program has just expanded in such a positive way, and I'm really very proud of all of that."

A great partner
To Richard Barohn, current vice chancellor for research at KU Medical Center and former chair of the Department of Neurology, Dick and Dewey K. Ziegler, M.D., the first chair of the department, are synomous with neurology at KU.

"When people think of neurology at KU for the last two generations, they think of Dr. Dick and Dr. Ziegler," Barohn said. "Hundreds of medical students and neurology residents who have been trained at KU and who are now spread around the region and the country know Dr. Dick was emblematic of the neurology department."

Barohn was a medical student at University of Missouri-Kansas City on rotation in neurology when he met Dick in 1978.

"He was just this very smart academic neurologist that I looked up to, him and Dr. Ziegler," Barohn recalled. "I wanted to be a neurologist, and they were my role models."

The two then reconnected 22 years later when Barohn became head of the neurology department at KU Medical Center.

"He's been great to partner with. He's the model physician who has a great bedside manner, makes patients at ease, makes everyone at ease," Barohn said. "It's been an honor to serve in the same department with him since 2001."

People-first philosophy
Even as Dick gracefully exits the profession, he remains as sharp as ever and willing to share crucial advice to physicians aspiring to follow the path he helped forge.

That person-first philosophy was deeply interwoven into Dick's career and is now a hallmark of his legacy. Sharon Lynch, M.D., first met Dick in 1991 when she joined the faculty. Similar to many others who have crossed paths with him, Lynch grew to view him as a role model admired not only for the ways he cared for patients, but also for his stellar teaching skills.

"He has taught countless residents how to be good doctors. Of course, along the way he's taught nurses and other physicians as well. But, he was an extremely fine teacher of the residents and made sure they understood a lot of the principles of good medical practice," she said.

"He has shown me how to be compassionate, advocate for patients and always continue to learn and expand my knowledge of neurology," said Fred Sachen, M.D., a personal friend as well as former resident and co-faculty member at KU. "I learned much about the ‘art of medicine' as opposed to the science of it."

Ultimately, Dick carved out a deep legacy as not only an excellent physician, but also as a tremendous person.

"He leaves the legacy of a caring and gentle neurologist doing the best he can to care for his patients with a wide variety of neurological disorders. He exemplifies the need to treat the patient and not to treat the disorder," said Richard M. Dubinsky, M.D., who began working with Dick after joining the faculty in 1988 and now cares for many of Dick's former patients. "He has set the standard of caring for patients that will be difficult to surpass."

Pioneering career
Dick earned bachelor's and master's degrees in biology before being drafted into the Army in 1958 and spending the ensuing three years at the Army Chemical Center near Baltimore researching leukemia. Upon his discharge from the military, he earned his medical degree at the University of Maryland. After finishing that internal medicine internship and a neurology residency at KU Medical Center, he was appointed as an instructor in the neurology department in 1969. He rose steadily through the faculty ranks to full professor in 1982.

Dick chose neurology over internal medicine or psychiatry at the encouragement of Ziegler, who convinced him that studying the brain and how it works was a gateway into understanding people. It's not overstating to say the New Hamburg, Ontario, Canada, native became a pioneer in the field. One of the first neurologists in Kansas City, he arrived in the mid-1960s when the specialty was in its infancy and the neurology department at KU didn't yet exist.

"There was a time when neurology was seen as maybe a worthwhile diagnostic specialty, but neurology couldn't do anything. We could make a diagnosis, but couldn't do anything about that condition," Dick said. "That has, over the years, of course, changed. The field is now just blossoming with treatments and potential treatments and understanding of biology and medical conditions. Our ability to not only diagnose, but to help, has just exploded. I think that's been the most gratifying part of the experience for me."

Dick helped fuel that evolution through dedicated service at KU, including completing stints as vice chair of the department from 1982 to 1985 and acting chair from 1985 to 1987. He then directed the residency training program between 1987 and 1990. He served as medical co-director of the Muscular Dystrophy Association clinics on the KU Medical Center campus from 1990 to 2004, when he took over as medical director through 2015.

In addition, Dick played an important role in launching statewide neurology outreach efforts by establishing clinics in communities such as Atchison and Pittsburg, where patients had limited access to neurologists. He also was integrally involved in the now-defunct circuit courses, travelling as part of a three-person team to towns and small cities throughout rural Kansas giving didactic presentations to local physicians.

"With the circuit courses, the places we visited might present a patient or we might give a talk," Dick said. "It was a really interesting time and, I think, an important part of the history of the department and, really, KU Medical Center."

Dick also made a mark in research, earning multiple National Institutes of Health grants to study brain edema and partnering with Ziegler in groundbreaking clinical research into migraine, including discovering some findings that are still used today. Dick's other clinical research revolved around stroke, particularly the role of aspirin in preventing the condition. He also studied epilepsy.

He further added to his stature nationally as a long-time and now former examiner and a current diplomate of the American Board of Psychiatry and Neurology. Dick also is a diplomate of the National Board of Medical Examiners.

The next chapter
With his retirement near family in Newton, Kansas, Dick has, in a way, come full circle. His apartment is adjacent to Bethel College, his undergraduate alma mater and, incidently, where he and Betty, his wife of 60 years, met.

As Dick firms up his postretirement plans, which will likely include geneology research into his Russian-German Mennonite heritage, he is focused on adding one more important footnote to his already exceptional career by establishing the annual Arthur R. Dick, M.D., Neurology Lectureship.

Motivated by a desire to leave a meaningful legacy, he envisions the lectureship serving as a vehicle for drawing alumni and friends of the neurology program back to Kansas City to exchange ideas and knowledge.

"It's one of the things I really treasure about the early days with Dr. Zeigler. We not infrequently had people who were giants in this new field of neurology come to Kansas City and KU to spend a few days and tell us what they knew, what their plans were and what the research showed," Dick said. "Leaving that legacy is the most important thing I can think of in terms of wanting to leave something of value."

Ultimately, Dick will be fondly remembered as a gentle, soft-spoken yet effective physican and teacher who positively influenced and mentored countless students, residents and colleagues. Gary S. Gronseth, M.D., the current chair of the neurology department at KU who worked alongside Dick for 17 years, can be counted in that number.

"By his example, I've become a kinder, gentler teacher, though I was never mean. When a learner made an error, he pointed it out in a very collegial, nurturing way, and I think we've all picked up on that," Gronseth said. "He was a pioneer here. It wasn't a department when he arrived and now it's a thriving department. I think that's the big legacy. Dr. Dick, along with a handful of neurologists, including Dr. Ziegler, was a trailblazer who built academic neurology at KU and within the community."

To contribute to the Arthur A. Dick Lectureship fund, visit KU Endowment.