The center was redesignated as a Parkinson’s Foundation Center of Excellence through 2025. 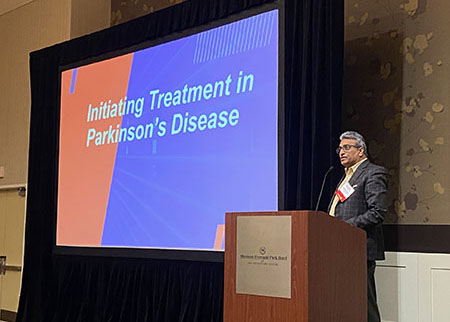 The honor recognizes the commitment to exceptional clinical care, research, education and outreach demonstrated by the Parkinson's Disease and Movement Disorder Center at The University of Kansas Health System and KU Medical Center. This most recent five-year redesignation runs through June 2025.

The Parkinson's Disease and Movement Disorder Center has held the honor for more than 25 years. It is one of only 33 Parkinson's Foundation Centers of Excellence in the nation and one of just 47 worldwide.

"It's an honor to earn the Center of Excellence designation for five more years. In order to receive this prestigious recognition, our center was internationally peer reviewed for its excellence in the diagnosis, treatment, research and education of Parkinson's disease," said Rajesh Pahwa, M.D., director of the Parkinson's Disease and Movement Disorder Center at The University of Kansas Health System and the Laverne and Joyce Rider Professor of Neurology in the Department of Neurology at KU Medical Center. "This designation highlights our large interdisciplinary care team and our commitment to providing the best quality of life possible for our patients and their families while advancing through innovative research our overall knowledge of caring for people with Parkinson's disease."

In addition to its clinical, education and outreach efforts, the Parkinson's Disease and Movement Disorder Center places a heavy emphasis on researching effective treatments, and ultimately a cure, for the progressive neurological disease that primarily affects older adults. The center maintains some of the largest databases in the nation related to people with Parkinson's disease. Beyond publishing extensively from the databases, researchers at the center actively engage in multiple clinical trials and investigator-initiated projects.

Currently the center has ongoing studies focusing in a variety of areas, including but not limited to:

The center also is involved in some genetic testing studies.