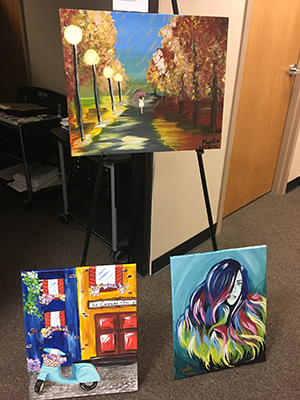 Original works by Department of Neurology Resident Monika Manchanda, M.D., and Professor Yunxia Wang, M.D., were featured in the first arts showcase presented by the Office of Graduate Medical Education at the University of Kansas Medical Center in Kansas City.

Growing up partly in India, where art classes were mandatory in school, Manchanda learned different techniques, brush strokes and other skills using mostly water-based colors. Recently, she has expanded to using acrylics and plans to explore other mediums such as oil as time permits. Manchanda's repertoire also includes medical illustrations.

"I believe we are all born with sort of a tool belt and should try to learn and attach as many tools or skills to it as possible," she said. "Painting has also been like meditation to me. It clears my mind from day-to-day stressors or other worries. It's also a great activity for get-togethers, and I often attend and organize paint nights with friends and family."

Meanwhile, Wang, who has been knitting since she was 10 years old. She enjoys the comfort of soft yarn and endless self-expression creativities. She enjoys making scarves and sweaters for both friends and strangers as well as knitting hats as gifts for newborns.

"Handing out a gift to a stranger and seeing the surprising smiles on their faces is the best reward for me," she said.

GME partnered with MedIntima, a medical student group, to present the showcase, which was aimed at spotlighting students, residents, fellows and faculty beyond their roles at KU as well as highlighting the importance of having an outlet for creativity.