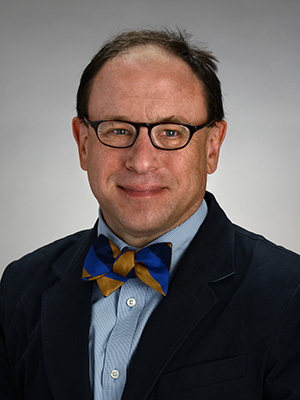 The University of Kansas Medical Center congratulates its partner, The University of Kansas Health System, and its Huntington's disease clinic, which recently earned national recognition as a Huntington's Disease Society of America (HDSA) Center of Excellence. The designation also highlights the important clinical research activities ongoing around the condition through the KU Medical Center.

The focus on HD at KU is rooted in a decades-long effort to better meet the needs of people with the fatal genetic condition that progressively affects the entire brain and impacts individuals' mental and physical abilities. Currently, there is no cure. According to the HDSA, approximately 41,000 people in the United States experience symptoms of the disease and more than 200,000 are at risk of inheriting the condition.

KU Medical Center has been actively involved in HD research since the late 1990s and currently is participating in two ongoing studies. ENROLL-HD is an international natural history study open to anyone who has HD or anyone who is at risk for it. Funded by the CHDI Foundation, a not-for-profit biomedical organization, the study initially was designed to look at the ways HD appears and changes over time. But it has evolved into an important vehicle for collecting and analyzing data for multiple HD studies aimed at trying to slow the disease's progression.

The other study, KINECT-HD, is a clinical trial for valbenazine, a drug being tested to treat chorea, abnormal, dance-like involuntary movements experienced by people with HD. The drug is currently approved by the U.S. Food and Drug Administration to treat tardive dyskinesia, a nervous system disorder that causes repeated movements, especially of the mouth.

Additionally, the medical center has worked closely with the Huntington's Study Group (HSG) to find treatments and engage in research opportunities.

"As the field moves towards studies treating the genetic abnormality we will be involved in more studies," said Richard Dubinsky, M.D., MPH, a professor in the department of neurology at KU Medical Center.

A long history of involvement

Dubinsky's interest in HD can be traced back to his residency when he heard a lecture by Nancy Wexler, Ph.D., the researcher who helped discover the marker for the disease. He supported the establishment of The University of Kansas Health System HD clinic in 1994, and since then, he has provided patient care as well as led HD research efforts at KU Medical Center.

Overall, HD research has been slow moving, but it is picking up speed. Nearly two decades separates the debut of the first mouse model of the disease in 1998 and when the first gene-silencing studies emerged in 2015. Gene-silencing therapies focus on ways to disrupt, knock down, decrease or turn off production of either or both mHTT and wtHTT, mutant forms of genes that cause HD.

In 2017, HD research took another step forward with a human trial testing gene silencing with a small, interfering RNA molecule. That potential treatment option continues to wind its way through the clinical trial process.

Both the long- and short-term prospects for HD research are promising. In the next one to four years, Dubinsky predicts there will be studies exploring different ways to silence the mutant HD gene either by injecting small RNA interfering molecules into the spinal fluid or the brain or delivering them orally. Other studies will look at altering the expression of other genes that effect the progression of HD.

"The early animal models of HD helped us understand how the mutation caused disease expression and this led to many medications, and now genetic modification, to alter the course of HD," Dubinsky said. "Eventually there will be studies of genetic editing to correct the mutation in the HD allele."

Meanwhile, Dubinsky has contributed to the fight against HD in other ways, such as by launching the first internet-based resource for people with HD, which has since been retired. Supported by a grant from the Robert Woods Johnson Foundation, he headed a work group on End of Life Palliative Care in HD that was published in 2004.

"My heroes are the people with HD and their family members who bravely face this relentless disease and who have participated in clinical research to find treatments and hopefully a cure for HD," he said. "It has been a great honor to have worked with the local HD community over the last 25 years and to be designated a Center of Excellence in recognition of the work that we have done and will continue to do."

The HDSA Centers of Excellence program now has a presence in 33 states and the District of Columbia after expanding to 50 this year, up from 47 in 2019 and only 20 in 2015.