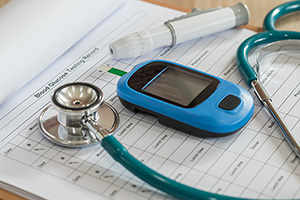 Researchers at the KU Alzheimer's Disease Center designed and launched a study testing a possible link between diabetes and Alzheimer's disease.

Can influencing the body's metabolism improve the brain's energy and how well it functions? Researchers at the University of Kansas Alzheimer's Disease Center are trying to answer this fundamental question with a new clinical trial involving individuals with Alzheimer's disease and dapagliflozin, a drug used to treat diabetes.

This single-site study designed by the KU ADC and funded by AstraZeneca, which produces dapagliflozin, will test the effects of 10 mg of the drug taken daily for 12 weeks on the brain's energy levels and cognitive function in people with Alzheimer's disease.

Dapagliflozin is approved by the U.S. Food and Drug Administration for type 2 diabetes, but not for Alzheimer's disease, and has not been tested as a drug therapy for people with Alzheimer's disease. The DAPA study also is unique because it will include testing the drug in people who do not have diabetes as a way of better understanding brain health.

Research has uncovered a strong link between type 2 diabetes and Alzheimer's disease, though experts don't yet have a great understanding of why the two conditions are connected. Similar to the way people with type 2 diabetes do not use insulin properly, some studies have shown the brains of people with Alzheimer's disease have difficulty using glucose. Those findings have prompted theories that Alzheimer's may be a form of diabetes that specifically affects the brain and led to the condition being unofficially dubbed type 3 diabetes.

Dapagliflozin helps increase the body's ability to break down glucose and reduce blood glucose levels by blocking glucose from being reabsorbed in the kidneys. Instead, glucose is spilled into the urine, resulting in a loss of up to 300 calories of sugar through urination each day, which then leads to weight loss, lower blood sugars and lower insulin levels. The drug also has been shown to boost the function of mitochondria, which are the parts of cells that produce energy.

The goal of the study is to find out if dapagliflozin improves the brain's metabolism. More broadly, though, KU ADC researchers believe shifting the body's metabolism will translate into positive effects on the brain, and the DAPA study represents the first step in testing that hypothesis.

"This trial is really trying to test if influencing the body's metabolism influences the brain's metabolism. For us, it's an important basic question," said Jeffrey M. Burns, M.D., M.S., co-director of the KU ADC and Edward H. Hashinger Professor of Medicine in the Department of Neurology at the University of Kansas Medical Center. "Is this drug going to cure Alzheimer's? No, I doubt it, and the study isn't designed to test if dapagliflozin can cure Alzheimer's. It's designed to test if influencing metabolism provides any benefits to people with Alzheimer's and their brain health."

As part of the study, researchers will use advanced imaging techniques to detect metabolic changes at the cellular level in the brain.

The hope with dapagliflozin is to increase a compound called NAA in people with Alzheimer's disease. NAA is associated with mitochondrial function, which is a primary overall research focus of the KU ADC, one of 31 National Institutes of Health designated and funded Alzheimer's Disease Centers in the nation.

"We think we can target metabolism as a therapeutic strategy for influencing brain health and brain disease. That's the big idea," Burns said. "The DAPA study is a really cool way to test that idea with a drug that has a pretty simple impact on the body. It's a pure test of this idea and that gets us excited."

Positive study findings would pave the way for more rigorous testing of the idea in a larger group of people to determine if the metabolic changes truly translate into real world benefits. The results also could potentially unearth promising strategies for improving the health of people with Alzheimer's disease and pinpoint opportunities for leveraging those strategies into identifying a cure for the disease.

To meet minimum eligibility requirements for the DAPA study, interested volunteers must be between 50-85 years of age, have an Alzheimer's diagnosis and have a study partner who can accompany them to visits and help answer questions about their health. Volunteers cannot have type 1 or type 2 diabetes unless they are treated only with metformin.

"In order to change the future for millions at risk of developing Alzheimer's disease, we need participants to help advance our research," said Erin Schwartz, a clinical research coordinator at the KU ADC who is overseeing the DAPA study. "Participants who enroll in this study are provided opportunities to frequently meet with clinicians, are provided with complimentary MRS and PET scans, and will work with a staff who is devoted to making a difference in their lives and the futures of others."

For more information and to inquire about eligibility for the DAPA study or other KU ADC clinical research trials, call 913-588-0555, extension 1, and visit the KU ADC website.