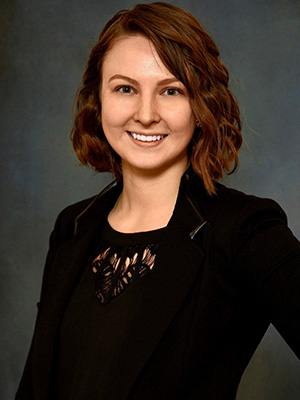 Kaley Kinnamon, M.D., has been obsessed with the brain since she was a little kid. While she grew up dreaming of becoming a neurosurgeon, she changed tacks after rotating with neurology during her third year as a medical student at the University of Kansas School of Medicine. The commitment, passion and leadership she has displayed for the specialty since then made her an excellent choice as the 2020 Dewey K. Ziegler Neurology Award winner.

Presented by department of neurology at the University of Kansas Medical Center, the annual honor is given to an outstanding senior medical student who is pursuing a career in neurology. The award recognizes its namesake's more than 50 years of service to neurology and to KU, including serving as the department's first chair from 1966 to 1984 and professor emeritus from 1990 until his death in 2012. Ziegler also served a term as president of the American Academy of Neurology.

Kinnamon was recognized in a virtual ceremony May 11 and presented with an engraved Deluxe Troemner Hammer.

"To me, everything that was interesting about the brain was on the neurology side of things," Kinnamon said. "I liked understanding the disease processes and diagnosing them more than I liked doing procedural things. I also found patient interactions very rewarding, and you don't get that as much on the neurosurgery side of things."

An accomplished student, Kinnamon was the recipient of the merit-based Loose Scholarship. She presented original research in traumatic brain injury at a national conference and was selected to give an oral presentation at the Southwest Surgical Conference. Kinnamon was a commended volunteer with PAIRS (Partnering in Alzheimer's Research), and served as president of Students in Schools, an organization that provides medical education to underprivileged middle schoolers.

"Going forward in my career, I hope to be a really good teacher. I want to be in academic medicine because I come from a family of teachers and I think that's a skill I'm good at," she said. "I'd love to be in a leadership position, helping to guide a residency or clerkship."

Kinnamon will complete her residency at the University of Vermont.

"We're proud of our students. Dr. Kinnamon represents the best of the best and we look forward to her being part of the future of neurology and the advancement of the neurosciences," said Gary Gronseth, M.D., FAAN, chair of the KU department of neurology.