JoAnn Locke, LPN, retires after 31 years of caring for patients and training residents

JoAnn Locke, LPN, retires after 31 years of caring for patients and training residents 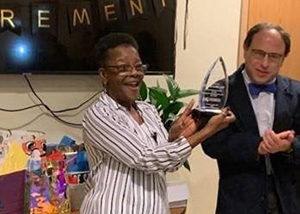 JoAnn Locke, LPN, celebrated her retirement with Richard Dubinsky, M.D., and other colleagues in neurology.

"My largest accomplishment was seeing my dream fulfilled with the same excitement as I had as a child when I told my first-grade teacher, ‘I'm gonna be a nurse,'" said Locke, who initially joined the health system in 1988 as a floor nurse, based primarily in Unit 55, which included urology as well as ear, nose and throat, though she also often floated to other areas in the hospital. "You never know what you are capable of until you are placed into a situation. With that being said, my most memorable time on the floors was the night I was the only nurse in ICU."

After serving as a floor nurse, Locke worked in several outpatient clinics including surgery, orthopedics, plastic surgery, family practice and obstetrics/gynecology before settling in the Department of Neurology in 2007. Based at the Landon Center on Aging at KU Medical Center, she was the only nurse working with the department's residents.

"Working with residents was a daily thing in a teaching hospital," she said. "I recognized they were no different in the outpatient setting, except I was able to spend more time with them in the clinic."

Over the course of her 13 years in that role, she had a hand in training 77 residents.

"The residents were definitely under her care and trained by her. They have gone on to successful careers here at KU, the Kansas City metropolitan area and throughout the country," said Richard Dubinsky, M.D., professor of neurology and former director of the residency program. "Besides the residents, she also looked after the faculty and her co-workers. She always had a kind word to say and worked to support everyone. She is greatly missed, and I wish her the best in her future endeavors."

Locke's passion for nursing was clear to everyone who knew her, said Carolyn Gray, RN, CCRC, who worked closely with her for 12 years.

"During her time in the Neurology department, she was devoted to both her patients and her residents. JoAnn was always willing to step in and help without the expectation of recognition or praise. While she took her work seriously, she was always ready with a joke," Gray said. "I have no doubt she will be just as successful in whatever adventures await her in retirement!"

In retirement, Locke will dedicate her time to ministry in the Kansas City area.

"I will miss the interactions with my patients, especially the hugs, my coworkers and all of our shenanigans, and working with and watching ‘my' residents grow," she said.