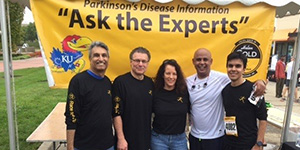 In this case, the magic came in the form of a phone call three months after Gold's mother, Helen, passed away from Parkinson's in March 2002. Bradley Brooker, whose mother Shirley also had Parkinson's, was on the other end of the line looking for a venue to hold a charity walk/run to fund research into the disease.

That both Helen Gold and Shirley Brooker had Parkinson's disease, as well as were patients and participated in clinical research trials at the University of Kansas Medical Center, was too much for Gold to overlook. He agreed to help launch the event.

"It seemed to create a magic moment for me," Gold said of the phone call in a video created right after the inaugural race in 2002, which is currently posted on the event website.

The event has grown over the years, expanding awareness of Parkinson's disease and attracting an increasing number of participating runners, walkers and teams. Yet the purpose has remained unchanged.

"Finding a cure was important to [my mother] and to myself," Gold said. "My mother participated in research trials at KU Medical Center as she wanted to find a cure. There was no question that all the proceeds [from the race] would be used to find a cure for Parkinson's."

Every penny generated from the charity run/walk goes toward research at KU Medical Center's Parkinson's Disease and Movement Disorder Center. The event has raised more than $800,000 to study the progressive neurological disease that primarily affects older adults.

Though there is a menu of available treatments for people with Parkinson's disease, the majority only control symptoms for a short amount of time and require taking medication multiple times a day. KU Medical Center helped pioneer a surgical therapy for eligible patients in which an electrode is implanted deep in the brain to help control symptoms and reduce the amount of medications necessary. A continuous infusion therapy also is available.

Multiple drug therapies designed to slow the progression of the disease are currently being studied. The hope is one of these treatments will lead to a breakthrough that results in a cure in the next five years. Researchers at the KU Medical Center Parkinson's Disease and Movement Disorder Center are actively involved in multiple studies and proceeds from the Helen Gold event are helping to fuel these efforts.

"The funds from Helen Gold have served as the foundation for our internal research projects to improve the quality of life of persons with Parkinson's disease and to collect more detailed information about the disease process and symptoms so that we can better treat all aspects of the disease," said Rajesh Pahwa, M.D., Laverne and Joyce Rider Professor of Neurology and director of the KU Parkinson's Disease and Movement Disorder Center.

Specifically, the center, a Parkinson's Disease Foundation Center of Excellence, maintains some of the largest databases in the nation related to people with Parkinson's disease, which include information related to nearly every one of its patients who has undergone deep brain stimulation since the center's program launched in 1994, as well as data on every new patient who visits the center.

In addition to publishing extensively from the databases, researchers at the center engage in a high volume of clinical trials and launch investigator-initiated projects. Much of this work would not be possible without the support from the Helen Gold events.

For instance, in one recently published paper from the databases, KU researchers studied the long-term effects of levodopa, the most efficacious drug therapy available to people with Parkinson's disease. The study demonstrated that levodopa significantly reduced the symptoms of Parkinson's disease at all stages of the disease, even more than 16 years after diagnosis.

"These funds have largely allowed us to design and implement new studies, and to publish data from our database, always with the goal of better understanding Parkinson's disease and improving the quality of life of persons with Parkinson's disease and their loved ones," said Kelly E. Lyons, Ph.D., a research professor of neurology and director of research and education at the KU Parkinson's Disease and Movement Disorder Center. "Without the support of Ron Gold, Allen Cinnamon and Dee Sand, who work tirelessly to make these events happen, and all of those who participate, donate, volunteer and otherwise support the Helen Gold events, we would not have the resources to maintain the databases and continue to publish and learn more about Parkinson's disease."

The Helen Gold 5K/10K Run/Walk will include a timed 5K walk, 5K run and 10K run; an untimed 5K walk; and a Kids Fun Run. The race is supported by the KC Track Club and RaceDay Timing. Prizes will be awarded to the top two male and female finishers for the timed 5K and 10K races in each of 12 age brackets.

To register, visit www.helengold5k.com. Runners and walkers interested in being part of the KU Medical Center team should click "Join a Team" on the registration page, search for "KU Jayhawkers" and select "Join."