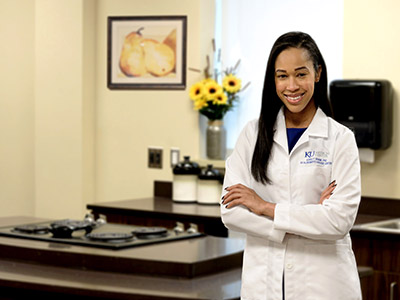 Alzheimer's disease currently affects an estimated 5.8 million people in the United States, and every 65 seconds another person is added to that already staggering tally. Recognizing the age-related condition disproportionately affects African Americans, the University of Kansas Alzheimer's Disease Center has launched an outreach to that community aimed squarely at changing that narrative.

At the heart of this effort is Aging with Grace, a free interactive educational program uniquely tailored to African-American culture that provides useful tools and resources to reduce the risk of developing Alzheimer's disease. The program also gives the KU ADC a chance to encourage African Americans to participate in its clinical research trials.

"We are disproportionately impacted by the disease. It is the fourth-leading cause of death among African Americans," said Ashley Shaw, Ph.D., MPH, a postdoctoral fellow at the KU ADC who facilitates Aging with Grace and who leads the center's outreach and recruitment in the African-American community. "As far as research, we have low participation among African Americans, which makes it difficult in the long run to understand how the disease manifests, how to best prevent it and how to best treat it, if we're not part of this process."

Shaw, whose background includes a bachelor's degree in nutrition and exercise physiology, a master of public health degree and a doctorate in nursing, is interested in Alzheimer's disease prevention through dietary interventions. Her research is centered on culturally adapted diets aimed to reduce Alzheimer's disease that are designed and implemented with community input.

This work is a potent mix of personal and professional for Shaw. Her grandfather had Alzheimer's disease, and she discovered a passion for research as an undergraduate at the University of Missouri. There, she was in the McNair Scholars Program, a federal education program designed to prepare undergraduate students for doctoral studies. After looking at intimate-partner violence among black women in her Ph.D. research, Shaw found she enjoyed engaging with the community but wanted to get back to focusing on nutrition and exercise.

That means spearheading the KU ADC's African-American outreach, including Aging with Grace, is right up her alley.

"Since I have a family history of Alzheimer's disease and understand the impact it's having overall on the African-American community, I thought this would be a great opportunity to join KU ADC, which aims to expand its presence in the African-American community and enhance enrollment of African Americans and Latinos into our clinical cohort and within our collaborative studies," Shaw said.

Aging with Grace was initially developed by two KU ADC researchers who worked with members of the African-American community to incorporate information they specifically wanted to learn about Alzheimer's disease, then fine-tuned by Shaw. It focuses on four key topic areas - social engagement, nutrition, exercise, and research opportunities at the KU ADC. The program, which features discussion, applicable Bible scriptures and opportunities for reflection, debuted in 2015.

Typically, Shaw presents the 90-minute program at least once a month to groups throughout the Kansas City area, usually at local churches. In 2019, more than 90 participants completed the program. As a result of the global pandemic, she is developing a virtual version of the program, which could be available to community members by mid-summer.

Shaw is collecting data from all attendees to understand perceived knowledge, attitudes, beliefs and readiness around research. She also is tracking how many inquiries the KU ADC receives through the program and how many participants go on to engage in the clinical cohort and lifestyle studies.

The data shows Aging with Grace leaves participants highly satisfied, with 93.1 percent rating the program as highly informative, and 89.1 percent of participants indicated they believe African-Americans should engage in research. KU ADC has fielded more than 40 calls from participants interested in becoming more involved in its studies, compared to 15 total inquiries last year, with about half ultimately enrolling in the center's clinical cohort, which studies memory over time.

These numbers represent good news for the KU ADC and, more broadly, for Alzheimer's and dementia research. According to the Alzheimer's Association, African-Americans are twice as likely as Caucasians to have Alzheimer's or other dementias but participate far less frequently in clinical research, two factors that make it especially important to engage with that community.

African Americans' reluctance to participate in research is, in part, rooted in a history of being used as study subjects without their knowledge or consent. Think Henrietta Lacks, whose cancer cells launched the immortal HeLa cell line in the 1950s, which is still active today and has contributed to major medical breakthroughs such as the development of the polio vaccine.

Shaw addresses past history head on in Aging with Grace then shifts the conversation to the IRB consent process and other safeguards that have been put in place to ensure research participants' understanding, safety and privacy.

Aging with Grace also tries to break down some of the stigmas associated with Alzheimer's disease and dementia within the community.

"I don't think there's a clear understanding of what the signs and symptoms look like. We have some people who are more worried, and if they forget anything, they're like, ‘oh my goodness, I have dementia,' but that's not necessarily true if they've always had difficulties with names. Some people think it's a natural part of aging, so they don't think anything of it and wait until later to seek treatment," Shaw said. "Before Aging with Grace, I don't know if the community had a clear understanding of the relationship between dementia and lifestyle factors and how that can increase one's risk of developing Alzheimer's disease outside of having a family history of the disease."

Examples of the lifestyle factors Shaw is referring to include physical activity and following a balanced diet since cardiovascular factors such as high blood pressure, diabetes and high cholesterol have all been linked to dementias and Alzheimer's disease. In other words, what's good for the heart also is good for the brain.

In Aging with Grace, Shaw talks specifically about the Mediterranean-DASH Intervention for Neurodegenerative Delay (MIND) Diet. It is a hybrid of the Mediterranean and DASH diets, but includes foods shown through research to support good brain health. She also provides participants with a copy of "Soul Food Makeover - Heart Healthy African American Recipes," a free resource available online from the National Institutes of Health.

"I walk them through [the MIND Diet] as a way they can incorporate that in their lifestyle. It allows flexibility as well and shows how this particular diet, in a way, is already a part of our soul food diet. We can still keep our culture. You don't feel like you're losing yourself, but doing it in a healthy way," Shaw said. "I do give attendees [the NIH cookbook] if they want to try out new recipes to see how it tastes and to show that healthy soul food doesn't have to lack flavor."

While Aging with Grace is the broadest plank of the KU ADC's outreach strategy to the African-American community, Shaw also makes a conscious effort to meet with those who sign up for any of the center's studies, either to personally do an assessment or to follow up to ask about their experience. She and colleagues also are in the early stages of exploring ways to sustain study participants' interest and engagement in Alzheimer's research as well as to invite their input into ongoing and future interventions.

As she continues to become a familiar face and trusted resource within the African-American community, Shaw is poised to expand her research portfolio after earning a Trailblazers Award from Frontiers: University of Kansas Clinical and Translational Science Institute to fund a new study. Set to launch in early 2020, the study will explore how the African-American community conceptualizes diet; attitudes, beliefs and barriers with currently available diets; perceptions of current diets and insights into how to make a brain healthy diet more appealing for the broader African-American community. She also will collect information on dietary measures as well as cardiovascular risk biomarkers, such as hemoglobin A1C and BMI.

"When I think of Alzheimer's disease, it's not an individual disease. It affects the community as a whole," Shaw said. "As a community, it's important on our end that we make a conscious effort to be part of the process to help fight against this disease. That can be done by being involved in research, whether that's through participating in observational studies like the clinical cohort or lifestyle diet and exercise studies. Also, making lifestyle changes in your personal life that can be passed down generation to generation is a great way to help fight against this disease."

For more information about Aging with Grace and clinical research trials, call 913-588-0555, extension 1, and visit the KU ADC website.