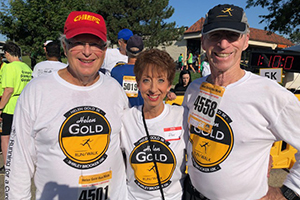 Hundreds of walkers and runners laced up their sneakers for the 18th annual Helen Gold 5K/10K Run/Walk supporting Parkinson's disease research at the University of Kansas Medical Center.

This year, the long-running event raised more than $77,000, with all proceeds benefitting research at the KU Medical Center's Parkinson's Disease and Movement Disorder Center.

Since its launch in 2002, the charity run/walk has generated nearly $885,000 to study the progressive neurological disease that primarily affects older adults.

"I would like to thank all of the Helen Gold participants, and I would especially like to thank Ron Gold, Allen Cinnamon and Dee Sand for what they have done for 18 years," said Rajesh Pahwa, M.D., Laverne and Joyce Rider Professor of Neurology and director of the KU Parkinson's Disease and Movement Disorder Center. "It's a long time and a lot of work; doing this year after year is really amazing."

Funds from the Helen Gold Run/Walk help the KU Parkinson's Disease and Movement Disorder Center maintain some of the largest databases in the nation on people with Parkinson's disease. The databases include information related to most of the center's patients who have undergone deep brain stimulation since the program launched in 1994, as well as data on every new patient who visits the center.

Researchers at the center publish extensively from the databases and engage in a high volume of clinical trials as well as investigator-initiated projects.

Over the last 18 years, significant inroads have been made in understanding and treating Parkinson's disease, including the development of many new medications. However, fall risk remains high for people living with the condition and looking for ways to reduce that risk is a point of emphasis for KU Parkinson's Disease and Movement Disorder Center researchers.

The Helen Gold 5K/10K Run/Walk was established by Ron Gold in honor of his mother, Helen, who participated in clinical research trials at KU Medical Center before passing away with Parkinson's in March 2002.

The 2019 run/walk was September 7 in Overland Park, Kansas, and drew 784 participants, topping the participation in each of the last three years by more than 100. For more information, visit the Helen Gold 5K/10K Run/Walk website.