The Handy Field Service Pocket Book for Veterinarians - A Review

This book - issued by the British War Office in 1914 - covered the basics of first aid and treatments for diseases and wounds afflicting horses and mules. All British officers in the field were required to be familiar with the general principles of care of their horses, thus, this valuable manual was issued by the British Army Veterinary Service so all junior officers could be aware of medical and surgical problems that would disable these important animals. The condition of horses and mules - specifically health issues - could determine strategy and troop movement on the front as well as the rear. King Richard and Shakespeare saw this clearly,“My horse, my horse, my kingdom for a horse - For the want of a nail a shoe was lost, for the want of a shoe a horse was lost....” 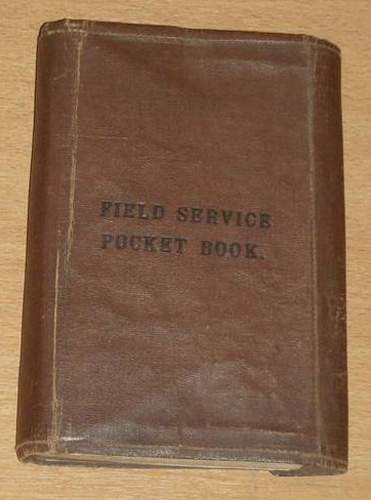 1) Enhancement of the overall health of animals by preventing introduction and spread of contagious diseases; reducing “wastage” of animals by prompt application of first aid; and removing sick and inefficient animals from the field.

2) The establishment of veterinary hospitals where sick and injured animals could be sent to receive treatment. Upon recovery, they were to be sent to the nearest remount depot for reassignment.

3) The provision of a veterinary officer to examine all slaughtered cattle before the meat was consumed by troops, to be certain it was free of disease.

4) Cold shoeing of horses would “invariably be adopted in the field.” Public animals would be shod without charge. 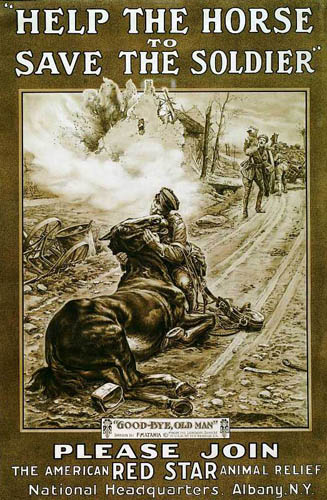 Numerous ways to treat common diseases and ailments were listed, the ailments and diseases underlined, as follows. For ringworm, the symptoms are, “hair falls out in circular patches.” The treatment described included washing with a disinfectant and applying iodine, paraffin or a soft soap. Symptoms for mange, another common skin disease, are noted, and include such important advice as “men who care for the sick animals should not mingle with well animals as the men might carry infection in their clothing”. In bold face lettering is the information: “Contagious to man; suspect any rash.” 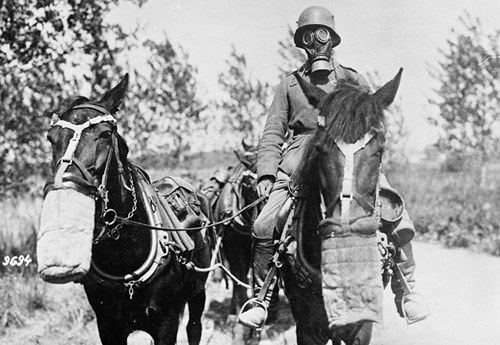 German soldier and his horses with gas masks

Care in removing ticks is next listed; then there is a discussion about sprain tendons which advises that the horse stand in cold water or have a soft layer of clay applied. Heel rope galls require dry bran poultices. Cracked heels and mud fever are to be treated by leaving the mud to dry, then brushing it off. No washing should be done. Treatment for thrush and dirty sheaths (of the penis) are listed next. Bullet wounds must be kept clean and dusted with boric acid and covered loosely with a clean pad of lint, wool or bandage. Broken knees are treated in the same manner as heel rope galls, as are cuts and tears.

Bit injuries, girth galls, sore backs and saddle galls each demand specific treatments as do coughs, colds and fever. An animal with fever should be isolated and given a “handful of Epsom salts in each bucket of water and kept warm with rugs.” Treatment for an animal exhausted after hard work is one that probably many a soldier would like to indulge in himself - a pint of warm beer or rum or whiskey in a pint of water. Also feed the animal bran mashes, steamed oats, oats and/or gruel. (A little bit of spirits and a good meal helps both man and beast, evidently). 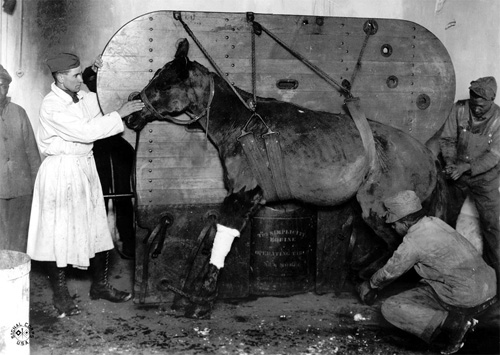 Injured horse being prepared for surgery

The treatment for colic and sand colic is not pleasant for either the animal or the caretaker. A large bottle with the bottom knocked out can be substituted for an enema funnel should this treatment be required. The same treatment is useful for constipation, while symptoms of diarrhea include treatment of dry bran with rugs and bandages to keep the body warm. For strangles, which is a swelling at the back of, or under the jaw, the animal should be isolated and veterinary aid obtained. The animal may also have some difficulty in swallowing.

Glanders, which is “a thick, gluey discharge from one or both nostrils,” is considered contagious to both other animals and to the men who tend to them. Now rare, glanders is caused by the bacteria Burkholderia mallei. This disease can spread rapidly, especially in the close quarters of a ship transporting animals to France. AEF records of horses evacuated (shot) for glanders in the field from September 7 to November 15, 1918, showed a loss of 0.17 percent with a total loss for all problems of nearly 31 percent, or almost one-third of the horses. Farcy is a “skin form of glanders” with “no tendency to heal.” It requires the same treatment as glanders. Another common illness was Epizootic lymphangitis which appears as running sores, caused by the fungus Histoplasma farciminosum. While the likelihood of healing is higher, the degree of contagion is also high.

One of the greatest difficulties in treating sick animals was the lack of space in which to isolate them, especially when large groups of animals arrived in the field. For example, the Canadian veterinarians sometimes dealt with as many as 50,000 animals per week, including those from the British imperial divisions and the artillery. 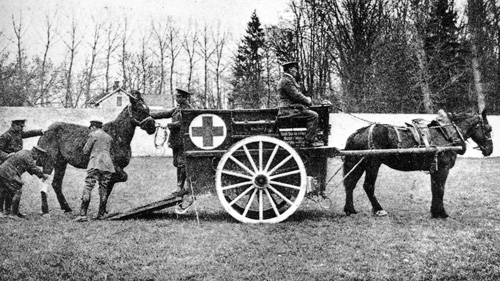 The last item on the list is what to do when all treatments fail. It is called the “coup d’grace” and advises the caretaker how to administer the death shot. He is instructed to “lift up the forelock and place it under the brow band. Place muzzle of revolver almost touching the skin where the lowest hairs of the forelock grow.” When taking care of hundreds of horses in the service, there may not be many opportunities to develop a special relationship with a single horse, but undoubtedly it happened. For men who love horses, this last act must have balanced the man’s grit with his compassion for the suffering animal.

The work of washing horses took several men up to four hours, and some had to be washed daily. The men wore waterproof jackets and pants because the animal would instinctively want to shake off the water and mud. Cleaning their hooves was difficult as was applying the different salves and medications prescribed at various places on the animal’s body. Shoeing a horse or mule could be hard on the blacksmith’s back, as he had to bend over and support animal legs for long periods of time. Much credit, therefore, should be given especially to the low paid yet dedicated veterinary assistants who worked in unpleasant conditions of mud caused by heavy rains or snow; cold or very hot weather; and personal danger from the battles, per se. Veterinarians were responsible for the proper and prompt care of their animals. Great Britain’s results were over 2,000,000 horses returned to duty out of 2,300,000 sent to the hospitals. Add to this the need to personally end the life of one of man’s most beloved animals. 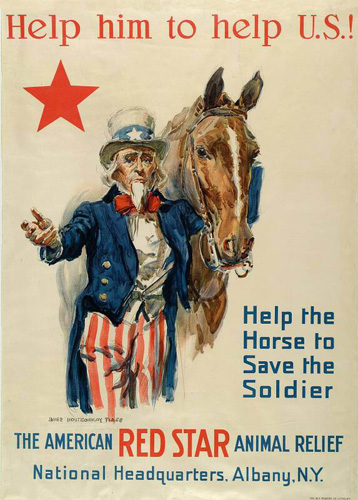 By April, 1918, France had 132 veterinary officers, perhaps a sufficient number, but lacked supporting veterinary assistants. Non-commissioned soldiers were constantly conscripted by the fighting units as France lost a tremendous number of troops in the war. The British had 1,300 veterinary surgeons in all their areas of war and more than 27,000 men providing veterinary medical care when needed. The American Expeditionary Forces (AEF) had their own instructions and information provided in G.O. No 122 and Bulletin No. 5. These publications contained a total of 14 “tightly written” pages. Much of what the British handbook covered was included, but also several items were added, such as the construction of sulphuration chambers to keep mange from spreading among the animals.

The British handbook might fit into a saddle bag but it certainly couldn’t be stuffed into a pocket. However, it was an important addition to the advancement of veterinary care for the millions of animals so vital to the success or failure of the World War I front line soldier.

Some images are from the Imperial War Museum in London, which also has a fine video you may view on the British Army Veterinary Service at their website. Other images come from several German sources.