Horses in The Great War

Great Britain and France discovered quickly in 1914 that frontal cavalry charges amounted to a slaughter of both riders and horses. Subsequently, cavalry charges were few. But the horse, the often beloved four legged beast, also had the important task of moving supplies and men. As a result, the sale of horses and mules by the United States in 1914 and 1915 reached record highs. Kansas, for example, was a major supplier. The slowdown of sales late in 1915 was blamed on German submarine attacks, and horses provided by Portugal then probably took up the slack. 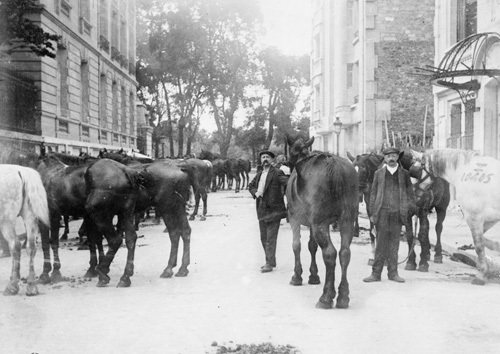 French horses requisitioned for the war effort in Paris

The United States was poorly prepared when it declared war on Germany on April 6, 1917. With a standing army of only 130,000 troops, specialized military services were either nearly non-existent or existed only on paper. One of these services was the important Veterinary Corps, responsible for the health of the small number of horses that comprised the cavalry. Especially important to the war effort were draft horses and mules, the “machines” that moved the goods and guns of the army. The shortage of transport animals was critical, as were facilities to maintain their health. The need for transport animals increased as the war continued, in spite of the gradual introduction of trucks and other mechanized vehicles to ease the shortage. Earlier, General John Pershing, while chasing Pancho Villa in the sandy western parts of Texas and northern Mexico in 1916 and 1917, discovered the value of trucks. They were useful, despite the windy, sandy conditions that made constant repair necessary. Once he was supreme commander of the American Expeditionary Force (AEF) in 1917, he increased his requisitions for mobilized vehicles, yet still needed increasing numbers of draft animals as well. 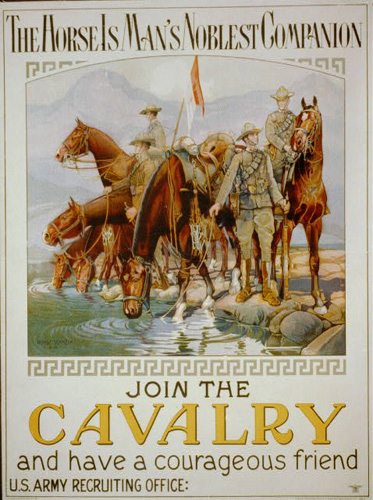 Germany and Britain began the war with 100,000 cavalry men each. However, a few weeks after arriving in France, the British, at the battle of Mons in August 1914, learned the vicious effectiveness of the machine gun on both riders and horses. Although this quickly diminished the use of the cavalry charge, they were occasionally attempted, even at the battle of Cambrai in 1917. The cavalry was expected to charge ahead of the slow moving tanks if an opening in the German lines occurred, thus, taking advantage of it. Tanks moved at the slow rate of only three to four miles an hour, a convenient pace for the accompanying infantry men to march and keep watch for hidden machine gun nests or snipers. When found they usually hid behind the tanks while throwing grenades or firing their rifles to keep the Germans from attacking. 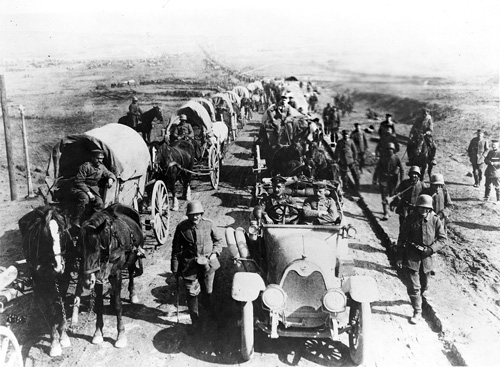 Supplying hundreds of thousands of animals with their daily needs of hay and grain proved to be a daunting task, often one that could not be fulfilled. Shipping fodder from England filled excess space over the shipping of men ready for fighting. For example, the amount of food allotted was by weight of the horse. For those 1400 lbs. and more, the ration was 17 lbs. of hay and 14 lbs. oats, corn, or barley daily. For the average cavalry horse, being lighter, rations were figured at 14 lbs. of hay and 12 lbs. of grain daily. A mule’s rations were less, being 14 lbs. of hay and 9 lbs. of grain. During one month a ration of 100 lbs. of straw was also recommended. During the last two years of the war these amounts were not available, and thousands of unfortunate animals died of starvation. The meadows and grasslands of France, which might have supplemented hay and oats from home, had been blown up, enormous craters and gulleys replaced the once ample grazing land that had fed animals over the centuries. Horses were found to be gnawing on the wooden wheels of wagons, or if close enough to a tree, an animal might be found chewing on the bark and leaves he could reach. The numbers of horses used and those who died are difficult to determine accurately for the Allies, but the commonly cited figure of 8 million dead from all armies is usually quoted. German figures are suspect as records were not kept or their accuracy is unreliable. British figures show that 2.5 million horses were treated in their veterinary hospitals, with 2 million well enough to return to duty. 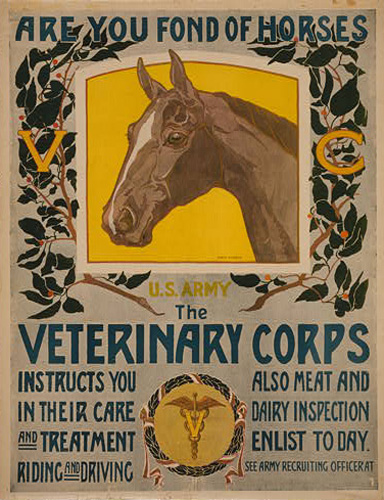 In addition to treatment of injuries and battle wounds, horses were regularly checked for glanders - also known as farcy - a highly contagious disease of horses and mules, occurring occasionally also humans. This bacterial infection, its agent known as Burkholderia mallei and now very rare, caused nodular abscesses and painful ulcers and led to a slow death. In the field horses were to be inspected every two weeks for the disease and, if found with symptoms, to be shot. A report from Camp Lee, Virginia, on one inspection stated that of the 10,000 horses and mules pastured there, 80 were found with glanders and destroyed. Thus, identification of glanders in horses that were to be shipped overseas was an essential duty. Another dreaded disease was epidemic equine influenza caused by the Orthomyxovirus/equine-2 virus - not related to human influenza. Influenza epidemics in horses were devastating and controlled only by rapid and selective destruction of infected animals. Several varieties of mange were found in horses and, though not fatal, were disabling. In 1918 the United States Army had two veterinary training schools, only one of these for activities in battle fields at the time of the war. The other school was in Greenleaf, Virginia. There, twelve veterinarians were assigned to each group of 400 horses, hardly adequate care even at home, and certainly too low a ratio in the battlefield. 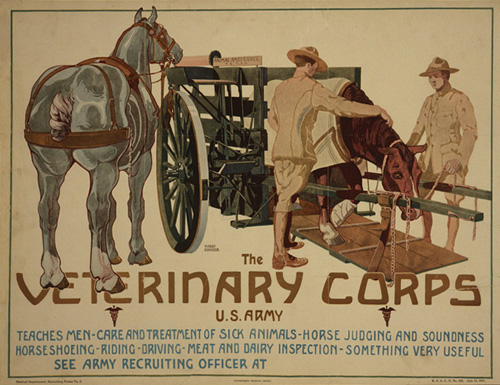 The British, by comparison, had an ample supply of veterinary hospitals and mobile sections, numbering at least 120 in the home country and on the battlefields. According to the Wartime Memories Project, the British Army advertised for “men who have been accustomed to horses and are able to ride . . . ages 40-47, standards of height and chest measurement to be waived provided the men are organically sound.” Interestingly, the ages listed are older than men eligible for the draft. The AEF had a long way to go to reach those standards. However, rules are often made to be broken, and a story emerged of a British soldier with the Army Veterinary Corps, Unit 15th Veterinary Hospital, who was only 35 when he died in the Salonika campaign on September 3, 1917. His family had always thought he had died and was buried somewhere in France, but he was buried in the British cemetery in Thessaloniki, Greece. Other personal stories will be shared in future essays.

Images are from the Library of Congress Prints & Photographs Division