Recognizing that gonorrhea is an acute disabling disease and that syphilis is a chronic disease with disability occurring years after exposure, military medicine accorded gonorrhea serious, immediate attention. Gonorrhea is caused by a bacteria, Neisseria gonorrhoeae, that is spread by sexual contact, with symptoms of painful, frequent urination starting within a few days of exposure and lasting for weeks to months. A soldier with acute gonorrhea is not able to fight. Syphilis is caused by an unusual bacteria, Treponema pallidum, that produces a painless ulcer -  called a chancre  -  on the penis or vulva within weeks of exposure and heals spontaneously. Disability, largely from infection of the heart and nervous system, occurs only years after infection. One hundred years ago, before antibiotics, there was no effective treatment for either gonorrhea or syphilis.  Treatment for gonorrhea was largely symptomatic, and for syphilis was use of toxic metals, such as arsenic. 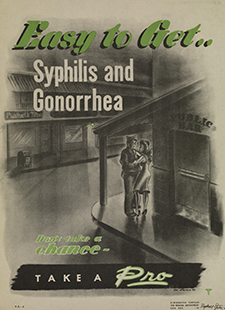 The armies of The First World War dealt with venereal disease in quite different ways. The German army provided brothels for their soldiers. As is easily imagined, given the German military's class structure of the time, the officers' brothels were up-market and the 'girls' young and pretty, wearing, as observed a soldier in Remarque's "All Quiet on the Western Front," very lovely lingerie. By contrast the brothels for the common soldiers were decidedly down-market and the prostitutes were not likely to wear silk and lace.  Before The War France had decided to legalize prostitution and provided a licensing mechanism for brothels and regular medical examinations for registered prostitutes. The French army was generous in supplying condoms to their troops. The British met the challenge of venereal disease prevention in their troops also by supplying condoms, and allowing their men access to French brothels. With the disruption and disorder of war there were many unregistered prostitutes in France, who might be identified as amateur, part-time, or casual sex workers. Estimates of the time suggest that a hard-working prostitute could service up to forty men in her working day. Because a woman may harbor gonorrhea bacteria in her vagina for long periods of time without any symptoms, her danger to society at large far exceeded the danger of the infamous Typhoid Mary who could infect only one family at a time. 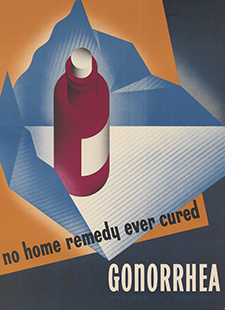 The American army's approach to venereal disease was quite different. In 1918, with the arrival of thousands of American troops in France, the premier of France, Georges Clemenceau, wrote to General John Pershing offering to establish 'special houses' for American soldiers. Pershing, passed the letter up the line to Secretary of War Newton Baker who is said to have exploded, "My God, if Wilson sees this he'll stop the war." Whether it was President Wilson's Presbyterian rectitude or the American prudery of the time, or both, a special order was issued making commanding officers directly responsible for the sexual health of their troops. Major Hugh Young, the rising star of Urology in America, was made a consultant to General Pershing and charged with seeing that this policy was enforced.  Thus, American soldiers were ordered to be chaste and were punished if they weren't. All encampments were enclosed in barbwire and had a single guarded entrance. Guards were empowered to screen all men entering a camp for possible sexual encounters with French women. The least suspicion got a soldier an immediate irrigation of his penis and bladder with a solution of potassium permanganate. Men who had any evidence of gonorrhea or syphilis were hospitalized and/or confined to the stockade, pay and allowances suspended. Condoms were never  -  never  -  given by the U.S. Army to American soldiers. 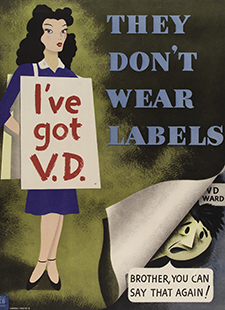 In an interesting sidelight, an American soldier in the trenches who had successfully hidden his gonorrheal infection could take a match stick and transfer some of the pus -  known as gleet  -  from his urethra to the urethra of another man, exchange of money occurring as well. Obviously, some men preferred the pain and shame of gonorrhea to possible death in trench warfare.

An aggressive campaign of lectures and posters denigrating French prostitutes and showing the dreadful consequences of venereal disease was waged. Chaplains and YMCA workers, widely present within the military structure, constantly preached virtue, purity, and chastity. Given all of this and giving some credit to Dr. Hugh Young, it is likely that this draconian policy actually did decrease the incidence of gonorrhea and syphilis in American soldiers, evidenced by the drop in the rate of venereal infections from before to after the policy was promulgated and enforced.  That is, from 1917 and early 1918, when American soldiers were just arriving in France, to later in 1918. 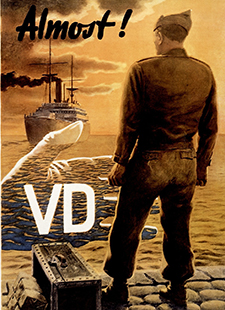 U.S. Army Medical Department statistics relating to venereal disease in The War are extensive and interesting. Thus, in 3,500,000 outpatient and hospital encounters 383,706 included a venereal disease, thus, 11%. The rate for officers as compared to enlisted soldiers was less than one-fourth. The rate of younger soldiers was higher than those older.  Interestingly, the venereal disease incidence rate was about 50% higher for soldiers serving in the United States and even much higher yet for soldiers serving in The Philippines.  French prostitutes, much maligned in 1918, appear to have been much less a danger than their American and Filipino sisters-in-sex. As might be imagined, the diagnosis of syphilis was much less common than that of gonorrhea. The ease of diagnosis of the former and the difficulty of diagnosis in the latter certainly accounts for much of this disparity, because a prostitute could transmit both gonorrhea and syphilis in a single sexual encounter. The diagnosis of gonorrhea would be manifest in days while syphilis might escape diagnosis for years, even decades. 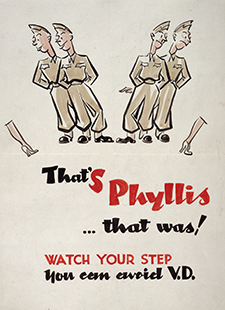 The influenza epidemic of 1918 was responsible for many more lost days of service than the venereal diseases. And, in fact, venereal disease was only fourth as a cause of permanent disability requiring discharge from the military service. It was exceeded by tuberculosis (first), valvular heart disease (second) and mental deficiency (third). 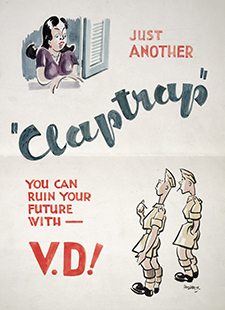 In summary it can be said that venereal disease in American soldiers in The War was common and, within the constraints of the time, dealt with expeditiously. All things considered it might have been wise to have followed the practice of other armies and have given condoms to American soldiers as was always the practice in later military actions.

The images in this essay are from both the First and the Second World Wars. They have been provided by The Wellcome Library in London.