Typhus on The Eastern Front

Typhus, an infectious disease, distinct from typhoid fever, has been endemic and occasionally epidemic in Eastern Europe since time immemorial, and often associated with war. From 1918 to 1922 it swept from Serbia through Russia and surrounding countries - the Eastern Front of The Great War - causing an estimated 30,000,000 cases and 3,000,000 deaths. It was not seen in France or Belgium, the Western Front. 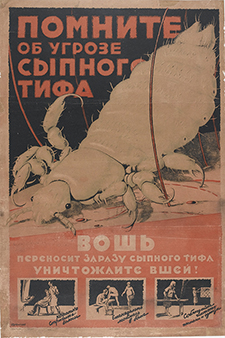 Epidemic typhus is caused by a small bacteria, a member of the rickettsia family, with the scientific name of Rickettsia prowazekii. This organism lives in the gut of the common body louse, Pediculus humanus humanus, (not the head louse), infecting humans when the crushed louse body or its feces is rubbed into abraded skin, or even the nose or mouth. It was likely present in an epidemic in Athens in the fifth century BC but was not definitively described until 1546 by Fracastorius in Italy. Napoleon's advance into Russia in 1812 was stopped in large part because of epidemic typhus. A human reservoir of these rickettsia can be assumed by the occurrence of Brill-Zinsser Disease, also from R. prowazekii . This is relapse of classic typhus years after initial infection and illness. Evidence of the long history and wide geographic spread of typhus is illustrated by its many names, such as, Classic, Historic, and European Typhus; Jail, War, Camp, and Ship Fever; Fleckfieber, Tifus Exantemático, Typhus Exanthématique, Tabardillo, and Dermotypho. The influence of typhus on the course of The Great War was profound. 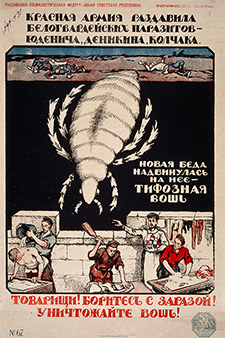 The epidemic started on the Eastern Front in 1914 and 1915. When Belgrade was bombarded, Serbs were made refugees in Belgrade and in adjoining areas. Thousands of Austrian prisoners of war were taken by the Serbs, and, with doctors, nurses, and drugs in short supply, a few endemic cases blossomed into a massive epidemic. The first cases were reported in the Austrian prisoners at Valjevo. Troops, prisoners, and refugees quickly spread the disease throughout all of Serbia. Half of the Austrian prisoners died and several hundred thousand Serbs died. Nearly one-third of Serbia's 400 or 500 doctors died as well. Because of this typhus epidemic the Germans, the Austrians, and the Russians feared to invade Serbia, though it was an important military prize, a crossroads of Central and Eastern Europe, as it were.

In an odd paradox, the disease trench fever, a close relative of typhus, and caused by the rickettsia Rochalimaea quintana , was equally common on the western and eastern fronts. A much milder disease, though spread in the same manner by the same body louse, trench fever is rarely if ever fatal. A peculiar shin pain, particularly with exercise, characterizes this malady. Skin lesions are typical of other rickettsial diseases and the intermittent, relapsing fever rendered soldiers on both fronts unable to fight. It has been known by several names, thus, Five-Day fever, Quintana Fever, Shin Bone Fever, and Volhynian fever. This disease has a peculiar propensity to relapse over a period of months, even years. To complete the paradox, soldiers on the Western Front were just as lousy as their brothers on the Eastern Front. Had typhus spread to France The Great War might have ended quite differently. 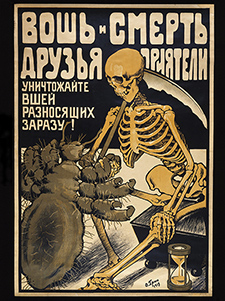 To get a feeling for this paradox one must consider the plight of Russia. By 1917 it was a disorganized country with a failed military. Russia was torn apart by typhoid, cholera, dysentery, famine, and the socialist revolution. Then real calamity occurred! Sweeping across the whole Eastern Front, from St. Petersburg in the north to Roumania in the south, typhus crossed into Mother Russia and nearly stopped the socialist revolution. There were at least 20,000,000 cases of which half died. Did the louse change the course of The War? Yes, it basically shut down The Eastern Front. It prolonged the war because German troops which had been fighting the Russians in the east, with the dissolution of the Russian Army, were transferred to the west and, thereby, strengthened the faltering German Army.

As adversaries, but strangely allies, the German, French, British, and Americans met the louse in daily conflict and won, at least as far as preventing outbreaks of typhus is concerned. In trench warfare virtually every soldier was infested with body lice. Living in close quarters, huddling together for warmth, soldiers made it easy for lice to move from man to man, living comfortably in the seams of their uniforms and enjoying blood meals. Soldiers bathed even less than infrequently and itched and scratched constantly. Delousing soldiers was a well-organized sanitary ritual. Chat was a common old term for lice and the soldiers invented the term cootie for their little companions. Thus, in the parlance of The War, British soldiers would get together for a chat and help each other try to get rid of their cooties. 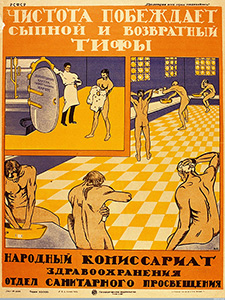 For the American army, every base hospital had a routine of stripping each soldier of his uniform before admission, giving him a shower or bath with strong soap and a variety of 'cootie oils', and then clothing him in fresh pajamas, slippers, and a robe. His uniform was taken to a large steam sterilizer and, with many other uniforms, thoroughly steamed to kill the lice and destroy their eggs. On return to duties he was given a freshly steamed uniform. In rest areas behind the front, showers, baths, strong soap, and cootie oils were provided but fresh uniforms were not always available for exchange. Napthalene and pyrethrins were used extensively for delousing in the First World War and were then replaced by DDT in the Second World War.

Because typhus and all of the other rickettsial diseases are easily cured with currently available antibiotics, typhus has lost its importance as a public health problem associated with warfare. Yet, before antibiotics, typhus did change twentieth century history. The War to End All Wars would have ended sooner had Russia managed to conquer the louse. Vladimir Lenin is quoted as saying in 1919 after the end of The War, "Either socialism will defeat the louse or the louse will defeat socialism." Sadly, many would observe, socialism won.

The images in this essay are from Russia in 1920 and have been provided by The Wellcome Library in London.