“. . . the poppies blow,
Between the crosses row on row,
That mark our place; and in the sky,
The larks, still bravely singing, fly
Scarce heard amid the guns below."

The history of the laboratory of U.S.Base Hospital No. 28, stationed in France, (1917-1919) included this statement: “The mode of most of the fighting in the present war, i.e., position warfare over fields which had been cultivated (with manure) for centuries, inevitably resulted in a great prevalence of gas gangrene infections.”

Gas gangrene is caused most commonly by anaerobic bacteria of the genus Clostridia, bacteria that do not require oxygen or air for growth, as do the common aerobic bacteria. When fields lay uncultivated for centuries, Clostridia were buried underground, but continued to grow and thrive in this airless environment. Trench warfare of WWI, spread over large areas of both France and Belgium, exposed these bacteria by disrupting and churning up the soil from artillery rounds and digging trenches. The wounds of injured soldiers were often contaminated with bacteria from long-buried manure which lurked in the trenches. Clostridia usually produced toxins which caused severe pain, gaseous swelling, and rapid breakdown of muscles and other tissues, so that the most radical surgery was necessary to remove completely and quickly all of the rapidly-dying tissues.

Most bacteria can be identified simply by means of plating discharge from wounds onto agar culture plates fortified with different materials, e.g. blood, chemicals, and glucose, to enhance growth. Laboratory personnel at Base Hospital No. 28, were clearly aware that they needed special anaerobic culture chambers in which both to grow the Clostridia, and also to accommodate large numbers of wound culture plates. Their review of the available, relevant scientific literature yielded no answers to address these special requirements. So, they experimented and created a method that proved highly satisfactory, even under their limited facilities: a ten-gallon gasoline can, evacuated of all air, and modified, was used as a special anaerobic culture incubator.

Treatment of contaminated wounds initially available to the medical and nursing staffs during the early months of WWI consisted of minimal exploration and use of various, then-new, antiseptic solutions to pour onto the wounds. For simple wounds such treatment might be adequate, but many of the wounds were caused by deeply penetrating shrapnel contaminated with dirt from the trenches and from piercing dirty, saturated uniforms. 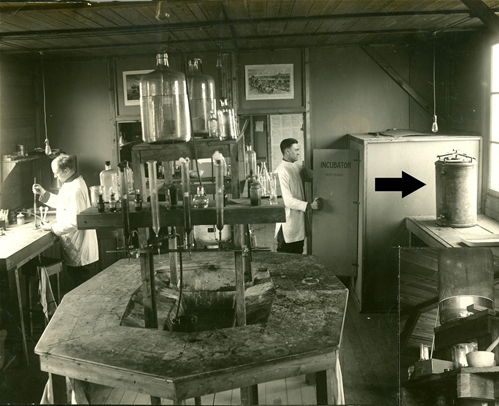 Before World War I a Belgian physician, Dr. Antoine Depage, reintroduced a previously discarded French practice of wound incision and exploration (débridement) and combined it with excision of devitalized or dead tissue. Some form of débridement had been used earlier in the Napoleanic wars but when the Napoleanic empire collapsed, the practice was largely forgotten and considered to be a crude and antiquated form of treatment. Minimalism of wound care had become the rule on battlefields. During the American Civil War (1860-1865) many wounds were not even explored.

Later in WWI, after the patient’s transfer to a more advanced facility, débridement of the wound called for removal of all mangled and damaged tissue along the entire edges of a wound, until healthy muscle was encountered. Very wide surgical exposure was advised for better visibility and viability of the tissues. Delayed primary closure of the wound was required in many cases.

Search of the medical literature revealed a paper by Miss (Dr.) Frances Ivens entitled, “A clinical study of anaerobic wound infections, with an analysis of 107 cases of gas gangrene.” Proc of the Royal Soc of Med 10: 29-110, 13 Dec 1916. 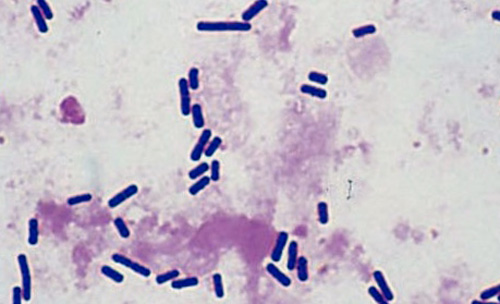 Dr. Ivens was the Surgeon-in-Charge of the Scottish Women’s Hospital (Hôpital auxiliaire 301) situated 30 kilometers north of Paris. Her paper consisted of her personal observations from Jan 13, 1915 to Oct 30, 1916 during which time 2,267 French soldiers were admitted. She followed, specifically, 107 patients with gas gangrene, (6.3 % of the 1,694 total wounded), and (23.6 % of the 464 wounded men with anaerobic wound infections). She provided a detailed narrative about these 107 cases followed by photographs and a table summarizing each case. Her care of her patients was consistent with advice given by Depage.

She described the various steps that were taken for a patient suspected of developing gas gangrene, most of them arriving by ambulance trains. They were made warm and comfortable, wounds were cleansed, débrided, and dressed, cultures were taken from the wounds to identify the bacteria involved, patients were taken to radiology for any x-rays, and then allowed to get a good night’s rest, unless immediate surgery was indicated. Antibiotics were not yet available, nor were such wonders as hyperbaric chambers. In spite of the lack of these, of the 107 cases of gas gangrene, only 25 (or 23.4 %) died. Thus, an amazing 76.6% survived, a truly remarkable record for the time.

Poppies and their Seeds - Why Poppies?

The species of poppy that grew on Flanders fields was the Papaver rhoeas, a Mediterranean wildflower found across southern Europe. But, why poppies?

There is an ancient story of a connection with Ghenghis Khan. “It is said that after his annihilation of his enemies, the fields were churned up and drenched in blood. Soon they were covered in pure white blooms of the poppy.” (Not all poppies are red!)

During the Napoleonic wars of the early 19th century, the same phenomenon occurred. Churned-up, blood-drenched fields erupted in red poppies. Oftentimes, the red color of the poppies was compared to the blood that was shed on the battlefield.

There may yet be another answer to the question of “Why Poppies?” Poppy seeds can lie on the ground for years, and only when no competing vegetation is in the vicinity and the ground is firmly rooted up, the poppy seeds will quickly sprout. There was enough rooted-up soil on the battlefield of the Western Front; in fact the whole front consisted of churned-up soil, that poppies blossomed like no one had ever seen before. 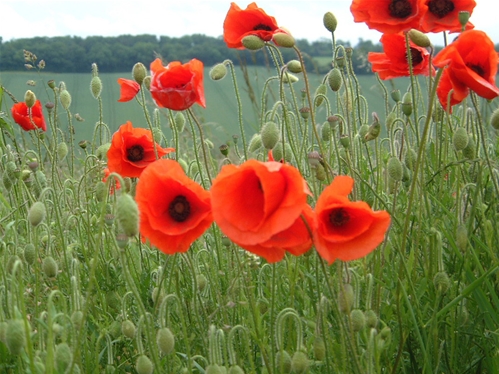 Red poppies sprouted from the churned up battlefields of Flanders

Another physician is now associated with this story, a Canadian surgeon, Dr. John McCrae, a lieutenant colonel in WWI attached to the Canadian 1st Field Artillery Brigade. He was the author of one of the most memorable war poems ever written.

In April and May of 1915 he had spent seventeen days of “Hades,” treating injured men, British, Canadians, Indians, French and Germans in the Ypres salient. A death that saddened him the most was of a young friend, a former student, who was killed on May 2nd by a shell blast. The soldier was buried in a small cemetery outside McCrae’s dressing station.

The next day McCrae sat for a short rest on the back of an ambulance parked near the station beside the Yser Canal, a few hundred yards north of Ypres. From that vantage point, in the near-by cemetery, he could see wild poppies that had sprung up in the ditches and fields. He vented his anguish by composing a poem in memory of his friend and others who had died in the war...‘’In Flanders Fields the poppies blow, between the crosses, row on row...”

A young sergeant-major, Cyril Allinson, was delivering mail that day when he observed McCrae writing. When he had completed his epic poem, McCrae took his mail from the young man and handed him his pad of paper. Allinson was moved by what he read, and it is reported that he remarked, “The poem was an exact description of the scene in front of both of us...the poppies actually were being blown that morning by a gentle east wind.” 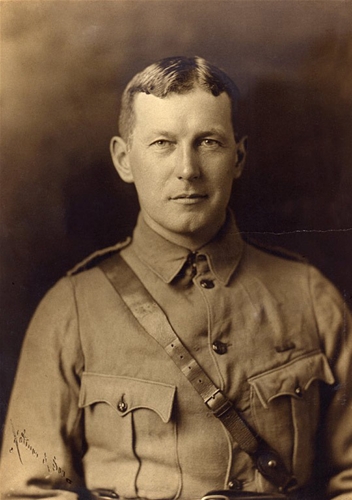 The artillery shells that churned up the soil and maimed and killed soldiers, brought not only Clostridia, the deadly bacteria to the surface, but also encouraged the proliferation and growth of the dormant poppy seeds that later in their beauty, bloomed in profusion on the barren, scarred land, even in the cemeteries. This red poppy (Papaver rhoeas) has become the acknowledged symbol to remember and honor the dead and members of the armed forces throughout the English-speaking world.

“We are the Dead.
Short days ago,
We lived, felt dawn, saw sunset glow,
Loved and were loved, and now we lie
In Flanders Fields."

Images are from Flanders House in New York, the National WWI Museum in Kansas City, and the Imperial War Museum in London.