Heart disease in 1918 was quite different from that which we now know nearly one-hundred years later. Congenital heart disease in adults and damage to the four valves inside the heart from previous rheumatic fever, now rare, were both common, difficult to diagnose, and not correctable by surgical intervention as is presently the case.  When one scans the lists of diagnoses of patients in base hospitals in The War it is surprising to see heart disease with some frequency. In fact heart disease was the third most common reason for medical discharge from military service. 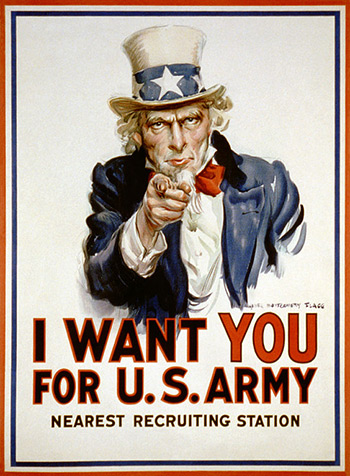 The Classic Recruiting Poster for WW-I

Draft board physicians, examining young men in groups, relied on a cursory chest examination with a stethoscope to detect murmurs  -  extra sounds  -   as evidence of heart disease. Heart murmurs are of two types, systolic murmurs which are synchronous with the heart beat itself and diastolic murmurs, occurring between two beats. Systolic murmurs are the most common of the two, are usually loud, and are most likely easily heard. Diastolic murmurs are usually soft and difficult to hear. In a sense this simple screening was efficient in identifying men with systolic murmurs of mitral valve insufficiency and aortic stenosis, most often the result of previous rheumatic fever in childhood. It also identified men with congenital heart lesions such as patent ductus arteriosus, ventricular septal defect, and coarctation of the aorta.  All of these men were rejected for military service on the spot and, presumably, told to see their family doctors. Ironically, perfectly normal young men with harmless systolic murmurs related to the vicissitudes of blood flow and not disease were also rejected. By contrast the soft diastolic murmurs of aortic valve insufficiency  -  associated with both childhood acute rheumatic fever and with tertiary syphilis  -  and mitral valve stenosis, were usually missed and the men passed for military service.  Aortic valve insufficiency and mitral valve stenosis are both serious forms of heart disease. In summary, thousands of young men with heart disease associated with systolic murmurs were excluded from military service as were their peers with systolic murmurs but no heart disease. In all probability most men with diastolic murmurs were pronounced fit and were sent to serve. 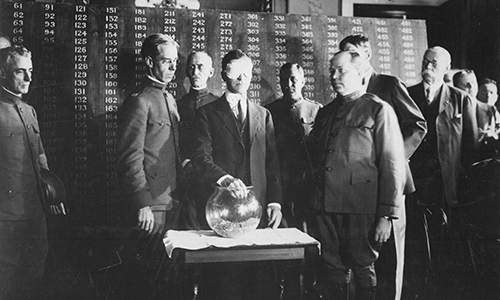 It is likely that the rigors of basic training identified some men with underlying, undiagnosed heart disease and they were given medical discharges. Of those who made it through basic training in the United States without incident and got to France to serve, the physical demands of trench warfare may have uncovered their hidden aortic insufficiency or mitral stenosis and have gotten them to a base hospital. Beyond this, damaged heart valves often become infected with indolent bacteria, such as several varieties of streptococci, and become further damaged and produce heart failure.  With no antibiotic treatment available at that time these men probably died. By contrast, heart failure of several other sorts was responsive to treatment with the drug digitalis. In any event, soldiers with diagnosed heart disease were sent to evacuation hospitals and then returned to the United States for discharge from the service.

The kind of heart disease that is most common in America now, arteriosclerotic heart disease, was probably very uncommon in an army of young men and rarely, if ever, diagnosed. In a place and time where sudden death in battle was sadly common it is unlikely that a man who died suddenly would ever have been identified as having what we now call, in common usage, a heart attack.

In 1918, using means other than a careful physical examination to diagnose heart disease, was not the rule. The chest x-ray, available at all base hospitals, could be used to view the contours of the heart and, thereby, get some clues as to enlargement of one or more of the heart’s four chambers. Heart valves, of course, could not be seen. The electrocardiograph machine had been invented in the late nineteenth century but it was a cumbersome machine and largely a tool for cardiology research rather than routine clinical use. All base hospitals had x-ray machines and physicians capable of interpreting x-rays, though little reason to be interested or expert at interpreting the heart silhouette. Few, if any, base hospitals had electrocardiograph machines and few physicians would have been able to make clinical use of them.

Injuries to the heart in battle were almost always immediately fatal. Yet, occasionally pieces of shrapnel could lodge near the heart, particularly in the shoulder or pericardium, the sac that surrounds the heart. In most instances these bits of metal would be left in situ, the risk of excising them far exceeding the risk of their being left in place. 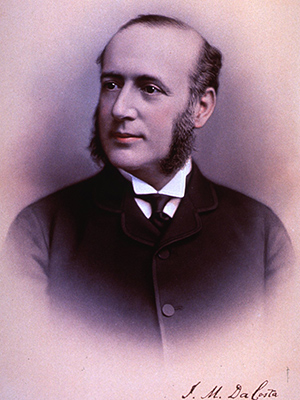 Da Costa’s Syndrome was very common in American troops. First described just after the Civil War by Dr. Jacob M. Da Costa of Jefferson Medical College in 300 men, it has had an enduring and interesting life. There are other names for this problem, usually associated with war and its aftermath, including neurocirculatory asthenia, soldier’s heart, irritable heart, cardiac neurosis, and many more. It is characterized by chest pain, rapid pulse, breathing difficulty, anxiety, fatigue, and a variety of other non-specific symptoms. In the Second World War the term “battle fatigue” was loosely associated with Da Costa’s Syndrome. In more recent times PTSD (posttraumatic stress disorder) shares many features with Da Costa’s Syndrome. Structural or functional heart disease has never been found in Da Costa’s Syndrome. As with much of the history of Medicine, diagnoses change with time and the term Da Costa’s Syndrome is now rarely used.

In summary it can be observed that screening for heart disease in draftees was not very efficient, both allowing men with serious heart valve lesions to be inducted and excluding men with heart murmurs but no heart disease. Once diagnosed, heart disease in soldiers was managed as best as possible given the times and lack of specific medications other than digitalis. Very few patients could have survived with battle wounds involving the heart.

Images are from the historical collection of The Wellcome Library in London and several newspapers of the First World War period.