In the First World War, as in previous conflicts, a major problem was infection of wounds. In many instances, the only treatment was amputation. This seems incomprehensible today – when infected wounds are treated with antibiotics. The first systemically active anti-bacterial drugs were the sulfonamides - not discovered until the late 1920’s - while the antibiotics that we are so reliant on today did not come along until the 1940’s.

The first breakthrough in finding an effective solution for infected wounds was the research of Robert Koch (1843-1910) and Louis Pasteur (1822-1895), which demonstrated conclusively that bacteria caused infections. Shortly thereafter, Sir Joseph Lister (1827-1912) demonstrated that the incidence of infected surgical wounds could be significantly reduced by maintaining antiseptic conditions during surgical operations. From there it was a short and logical step to go from disinfecting the patient’s environment to disinfecting the patient. Henry D. Dakin Ph.D. (1880–1952) was born in England, the youngest of eight children in a prosperous merchant family in West Yorkshire. He received his doctorate from Leeds in 1902 and, after postdoctoral work at Heidelberg, Germany; in 1905, he joined the faculty of Columbia University in New York. He was a specialist in the study of human proteins and amino acids. He became interested in the problem of finding an anti-bacterial that would work in the presence of body fluids and not harm normal tissues, in particular the patient’s white blood cells. He had observed that chemicals like iodine and peroxide are so strong that they kill bacteria but also kill human cells indiscriminately. Also, quickly bound to amino acids they are rendered ineffective.

Not a physician, Dakin never saw a patient or treated a wound; all of his work was done in laboratories. In this setting he found that diluted sodium hypochlorite (NaClO), widely used as a bleach, was a good antiseptic, thus extending the work of the French researchers Antoine Germain Labarraque and Claude-Louis Berthollet, who first described the disinfectant and deodorant use of this chemical in the early 1800s. Dakin was a private person, not outgoing and no promoter. The world might never have heard of either him or his solution except for two things: the start of World War I and his association with a French physician named Alexis Carrel, the Nobel Laureate in Physiology in 1912.

Carrel (1873–1944) was a surgeon and the opposite of Dakin. He was domineering, wily, arrogant and outspoken, but he was a genuine super star of medical science; among other things he invented vascular surgery, performed the first heart bypass surgery, the first heart transplant (not in a human), studied cellular aging and invented tissue culture – one of his specimens survived outside of a host for over two decades. Even though he had been working at the Rockefeller Institute in New York since 1905, he was a French citizen, and so was called up when the war started and was assigned to head up a field hospital near Compiègne (site of the 1918 Armistice ceremony).

Dakin had been a colleague in New York, and Carrel remembered his work. Meanwhile, British-citizen- Dakin had also returned to his homeland in late 1914 to volunteer for service. Carrel tracked him down and arranged for him to be sent to France, where Dakin and Carrel perfected the solution.

Dakin’s solution is a mixture of sodium hypochlorite (0.4% to 0.5%) and boric acid (4%) diluted in water. The boric acid (HȝBOȝ) acts as a buffering agent to maintain a pH of between 9 and 10, as alkalinity outside this range is found to be much more irritating. Boric Acid is also a mildly effective antiseptic. 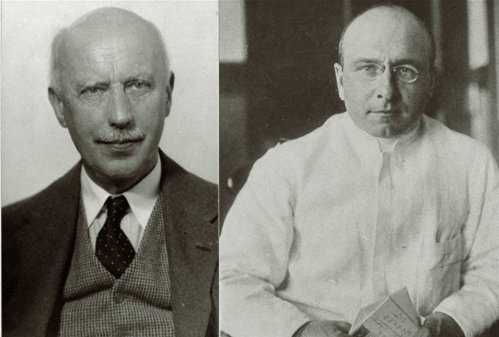 Carrel began a regimen that used Dakin’s solution to thoroughly cleanse wounds and then regularly irrigate the site until healing was complete. He devised methods to insert tubes into wounds and surgical sites to deliver Dakin’s solution. He termed this the “Carrel-Dakin technique”, and it was probably the first time Dakin’s solution was actually used on patients and also the first time post-operative irrigation had been used. The gamble soon paid off; Dakin’s solution successfully killed bacteria in and on the wound, and did not damage healing skin and deeper tissues. Wounded soldiers began to get better. Healing times were shortened by as much as three weeks. Carrel, always the self-promoter, then renamed the all-important antiseptic the “Carrel-Dakin solution.”

WW-I Examples of Wound Irrigation by the "Carrel-Dakin Technique"

Carrel got the word out. A headline in the New York Times said, “Drs. Carrel and Dakin Find New Antiseptic; Remedy Said to Make Infection Impossible.” The technique and the solution were used around the world and saved thousands of lives, with Carrel largely taking credit for Dakin’s discovery. 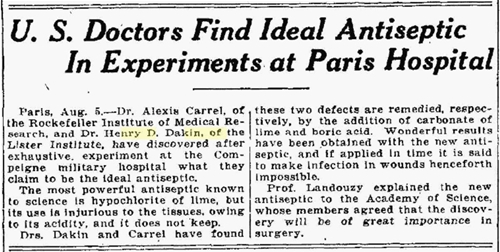 Newspaper Coverage Around the World Was Laudatory and Extensive

Dakin and Carrel soon went their separate ways. The mild-mannered Dr. Dakin returned to the U.S. in 1916, resigned from Columbia, married the widow of his mentor Dr. Christian Herter (1865-1910), and thereafter continued lines of research begun by Herter at Herter’s private lab in Scarsdale, New York. Carrel became increasingly famous, although he branched out into medical ethics and even philosophy. His 1935 best-seller L'Homme, cet inconnu (“Man, The Unknown”) advocated eugenics and in 1941, he accepted an offer from the Vichy government in unoccupied France to head up the Centre d’Etudes des Problèmes Humains (“Foundation for the Study of Human Problems”).

Considered to be a war criminal and a collaborator, he died in Paris in November 1944 (not thought to be a suicide) before he could be arrested. Carrel’s name was stricken from public use and the lifesaving medication reverted to its original name, “Dakin’s Solution," and as such is widely used today. Remarkably, a hundred years later it remains one of our most valuable treatment options for management of wounds.

Images are from The National WW-I Museum at Liberty Memorial, and Michael E. Hanlon, WW-I Historian.