Blood transfusion is often cited as a major medical advancement of the First World War, and possible only because of innovations made shortly before the United States entered the war.

Transfusion at the Start of the 20th Century

Blood transfusion had been attempted throughout history but generally failed due to a variety of factors. Chief among these was the propensity of blood to clot, reducing its flow and clogging equipment used to transfer it. Blood could not be stored and needed to be administered as quickly as possible. By 1900, transfusions typically involved connecting blood vessels of donor and recipient using India rubber tubing. A method to suture blood vessels together was devised by Alexis Carrel in 1902 and improved by George Crile in 1905. These direct transfusion methods necessitated cutting through the skin to expose blood vessels. This required great surgical dexterity, could take two to three hours, and demanded that donor and patient lie quietly side-by-side lest the connections be disrupted. It was impossible to gauge how much blood actually passed from donor to patient, and clotting remained a major problem.

Severe, sometimes fatal, reactions occasionally occurred and most were due to blood group incompatibilities. Although ABO blood grouping was discovered in 1900 by Karl Landsteiner, it would be several years before its significance in transfusion was appreciated by most physicians. Given the difficulties and unexplained reactions, interest and trust in transfusion had significantly waned by the turn of the century, especially among European physicians.

However, interest in transfusion remained higher in the United States, and in the years preceding the war several key advances were made. By the early 1910s, a few physicians ‒ notably, Ludvig Hektoen in Chicago and W.L. Moss in Baltimore ‒ had begun to call for ABO blood group matching of donors and transfusion recipients. In New York, Reuben Ottenberg and Albert Epstein promoted a test combining blood from the donor and the patient ‒ a “cross-match.” Sadly, most physicians thought such tests unnecessary.

In 1913, A.R. Kimpton and J.H. Brown of Boston collected donor blood into a glass cylinder that had first been coated with a film of paraffin. If properly done, the paraffin’s smooth surface delayed clotting. Better still was the multiple syringe method devised that year by Edward Lindemann of New York. A highly-choreographed team kept syringes in constant motion from donor to patient. Importantly, they used sharp-pointed metal needles inserted through the skin directly into the veins, eliminating the need to expose the blood vessels by incision. Modifications replacing the syringes with tubing and stopcock devices simplified the process, making it possible for a single physician to perform a transfusion. 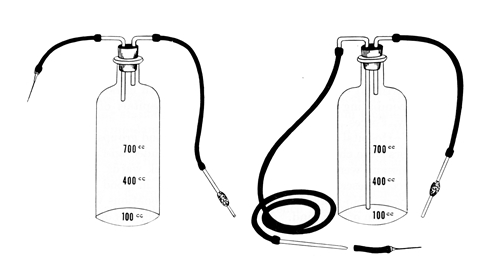 Figure 1. Blood Bottles – World War I. About 500 mL of blood was typically collected from each donor. Prior to transfusion, excess anticoagulant was removed and the blood poured into a new bottle, filtering it through a gauze plug to remove any clots or debris.

In 1914-1915, the use of sodium citrate anticoagulant was introduced independently by Albert Hustin in Belgium, Luis Agote in Argentina, and Richard Lewisohn in New York. The anticoagulant allowed blood to be stored for a few days and ended the need for donor and recipient to be in the same room. At the Rockefeller Institute in New York, Peyton Rous and J.R. Turner Jr. found that adding dextrose (sugar) to the citrate extended the storage time to four weeks.

When the war began in Europe, the few transfusions given by French and British doctors used older direct methods, such as Carrel’s anastomosis. These methods might work at hospitals behind the lines, but were too delicate for military operations. And, it was difficult to arrange sufficient donors and surgeons when multiple patients simultaneously required transfusion.

One of the greatest hazards of blood loss by the wounded was shock. Many British doctors initially preferred to treat shock with infusions of saline or of “Bayliss’ gummy solution” – a colloid preparation of gum arabic (from the sap of the Acacia tree), suggested by physiologist William Bayliss. When Canadian physicians joined the war in support of the British Empire, they brought with them the syringe and paraffin tube methods of blood transfusion. Notable among the Canadians was L. Bruce Robertson from Toronto, who had recently trained with Lindemann in New York and who published his wartime transfusion experiences in the British Medical Journal in 1916-17, highlighting the benefits of infusing blood. British interest was piqued.

The U.S. entry into the war in 1917 brought more physicians familiar with transfusion. Among them were Roger Lee and Oswald Hope Robertson, with Base Hospital No. 5 from Boston, where some of the leading proponents of transfusion worked. Before the war, Lee, an early advocate of blood grouping, had sent Robertson to work with Rous at the Rockefeller Institute. After arriving in France, Robertson was sent to the British 3rd Army Casualty Clearing Station to consult with them on transfusion. There he drew up plans for what many consider the world’s first blood bank. Initially, Robertson used citrated blood drawn into one liter glass bottles, converting ammunition boxes into shipping containers, with sawdust and ice packed around the bottles. He selected only group O blood donors, compatible with all other blood types, thus requiring no further testing. The citrated blood could only be stored a short time, but it allowed blood to be collected in advance of need. Robertson soon incorporated Rous and Turner’s dextrose into his bottles. Citrate and dextrose were sterilized separately, then mixed in a two liter bottle (the larger bottle necessitated by the volume of dextrose needed).

Robertson’s methods were so successful that by the end of the war he was conducting a school for blood transfusion, training teams from other medical units. Citrated blood (usually without dextrose) became the method of choice for most Allied medical forces, although paraffin tube and syringe methods (each with a variety of adaptations) were also widely used. Allied medical forces were issued standardized transfusion kits to carry into the field, allowing blood to be given even before transferring the injured to casualty clearing stations. 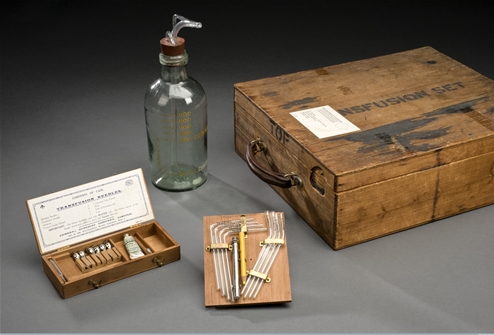 Not all transfused blood was group O. When time and facilities allowed, some donor blood was typed and “cross-matched” prior to transfusion. Lists of blood groups of camp personnel were maintained, to be summoned as donors were needed. Convalescing troops often volunteered as donors for more seriously wounded comrades.

Using preserved blood allowed it to be stockpiled and ready when needed. A single officer, usually with one assistant, could give the blood quickly and at the patient’s bedside, without having to move him and the donor together into an operating room, thus freeing operation room space as well. In addition to treating shock, blood transfusion was also used successfully during surgical procedures and in treating carbon monoxide poisoning, septicemia, and chronic wound infections. The First World War introduced transfusion methods to more doctors and in more standardized procedures than might have occurred in peacetime, and convinced them of its benefits. When these physicians returned home, blood transfusion gained a new place in civilian medical practice.

Images are from The Wellcome Library.