A comprehensive accounting of the U. S. Army’s Medical Department in World War I can be found in the official history produced by the Surgeon General’s Historical Division. The project began with Major General William Gorgas’ - Surgeon General from 1914-1918 - order creating a historical board to define and oversee the project. 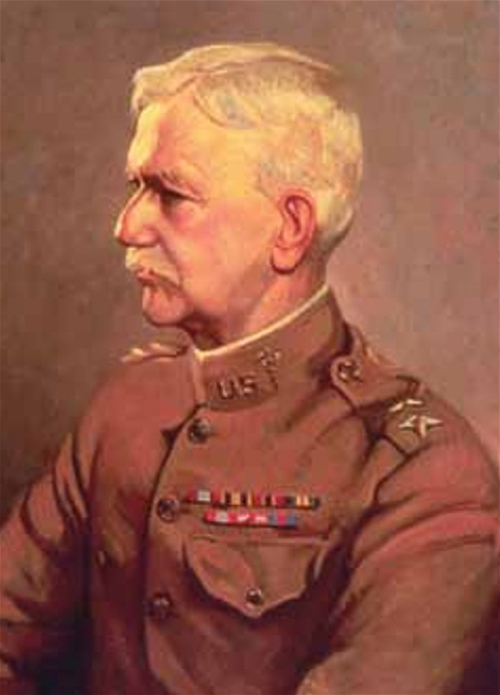 The board stated the purpose of the history to be a wartime description of the department from “administrative and scientific” viewpoints. The result, entitled The Medical Department of the United States Army in the World War, was published from 1921-1929 under the direction of Major General Merritte W. Ireland, Surgeon General, 1918-1931. 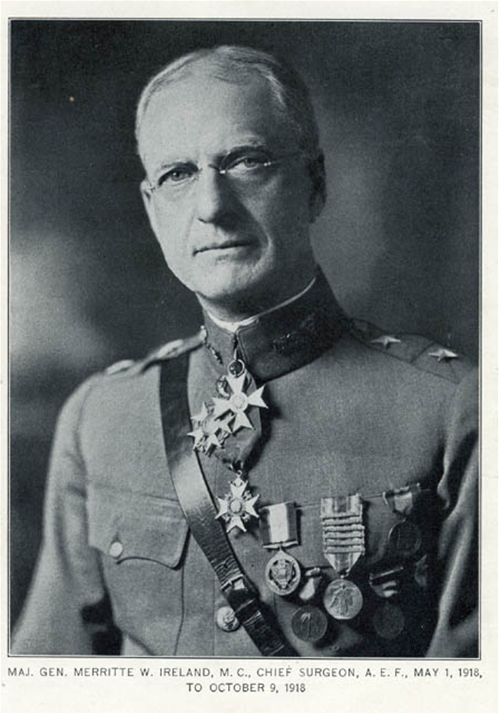 To study this remarkable resource one has two choices. The first is to find it in a reference library. The second is to access it at the U.S. National Library of Medicine website. Obviously, the second option is easier as it allows one to read it on-line, even to download individual volumes. The following is a guide to assist scholarly research by providing a brief description of each volume and link to it.

Volume II: Administration American Expeditionary Forces deals with the delivery of medical care in Europe. Section I describes the organization and administrative structure of the Chief Surgeon’s Office. Section II covers the medical activities of the Territorial Sections of the A.E.F. Section III describes the hospitals units in Europe, to include locations and a brief history of each. Section IV covers the evacuation of patients to the United States. Sections V and VI describe a range of medical activities in France and occupied Germany.

Volume IV: Activities Concerning Mobilization Camps and Ports of Embarkation examines the medical support required to ensure mobilization camps, National Guard cantonments and embarkation ports were safe from disease as well as providing for medical care for men housed at these sites. 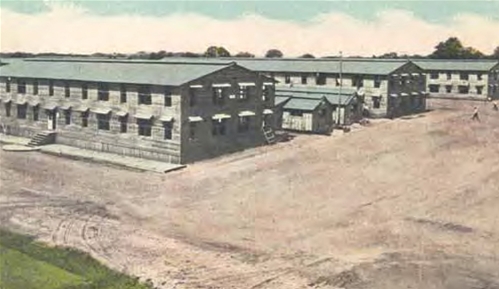 Volume V: Military Hospitals in the United States describes the types of hospitals - such as camp, general, post, embarkation and debarkation established - including how they were sited, built, organized and administered.

Volume VI: Sanitation examines several topics devoted to preventive measures to ensure the health of the soldiers, such as sites for camps, housing, food, water, waste disposal, control of insects and vermin, control of infectious diseases, and the physical examination of men upon entering and leaving the army.

Volume VII: The Medical Department of the United States Army in the World War describes the how the department expanded through the mobilization of the nation’s medical talent, to include the training of officers and enlisted men for service in military medicine. 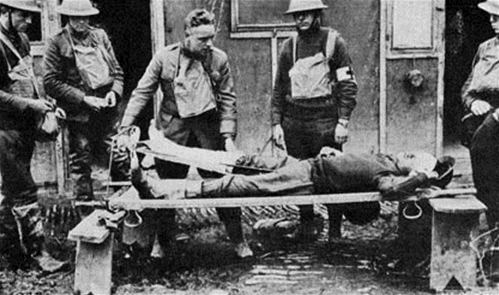 Volume IX: Communicable and Other Diseases is a resource for understanding how the army dealt with the major diseases confronting it, such as Typhoid Fever, Influenza, Tuberculosis, Cerebrospinal Meningitis, Diphtheria, Venereal Diseases, Smallpox, Chicken-pox, Scarlet Fever, Mumps and more. 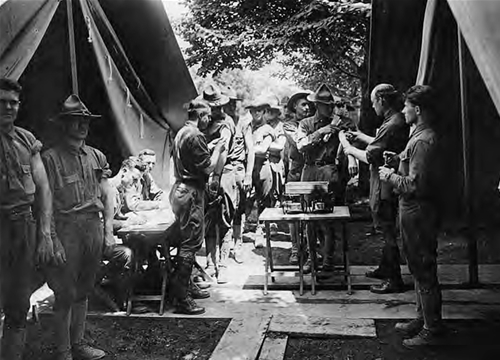 Vaccinating the troops in the field

Volume X: Neuropsychiatry describes how the department detected, treated, and provided for the care of men who were found to have a nervous or mental disease, to include an assessment of occurrence of neuropsychiatric diseases in the army.

Volume XI: Surgery is published as two parts. Part One covers the topics of general surgery, orthopedic surgery and neurosurgery. The section on general surgery provides material on wounding agents, battlefield medicine, anesthesia, gas gangrene, wound shock and a discussion of wounds of the chest and abdomen. The orthopedic and neurosurgery sections examine in detail clinical work relevant to their specialties. Part Two is a mix of topics and specialties, including Empyema, Maxillofacial Surgery, Ophthalmology, and Otolaryngology. 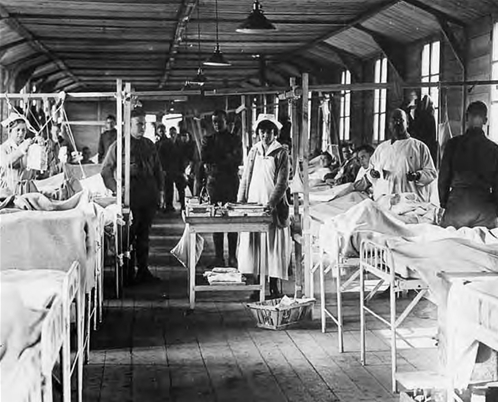 Volume XII: Pathology of the Acute Respiratory Diseases and of Gas Gangrene Following War Wounds is divided into two sections. The first examines the pathology of acute respiratory diseases from autopsy specimens, including the influenza pandemic. The second section examines the causes and effects of gas gangrene.

Volume XIII: Part One Physical Reconstruction and Vocational Education: Part Two, Army Nurse Corps cover two topics. Part one deals with how the department dealt with men requiring further care and rehabilitative treatment, including the types of specialized hospitals created and the treatment provided. Part two covers the organization, expansion, administration, and description of nursing in the United States and Europe. 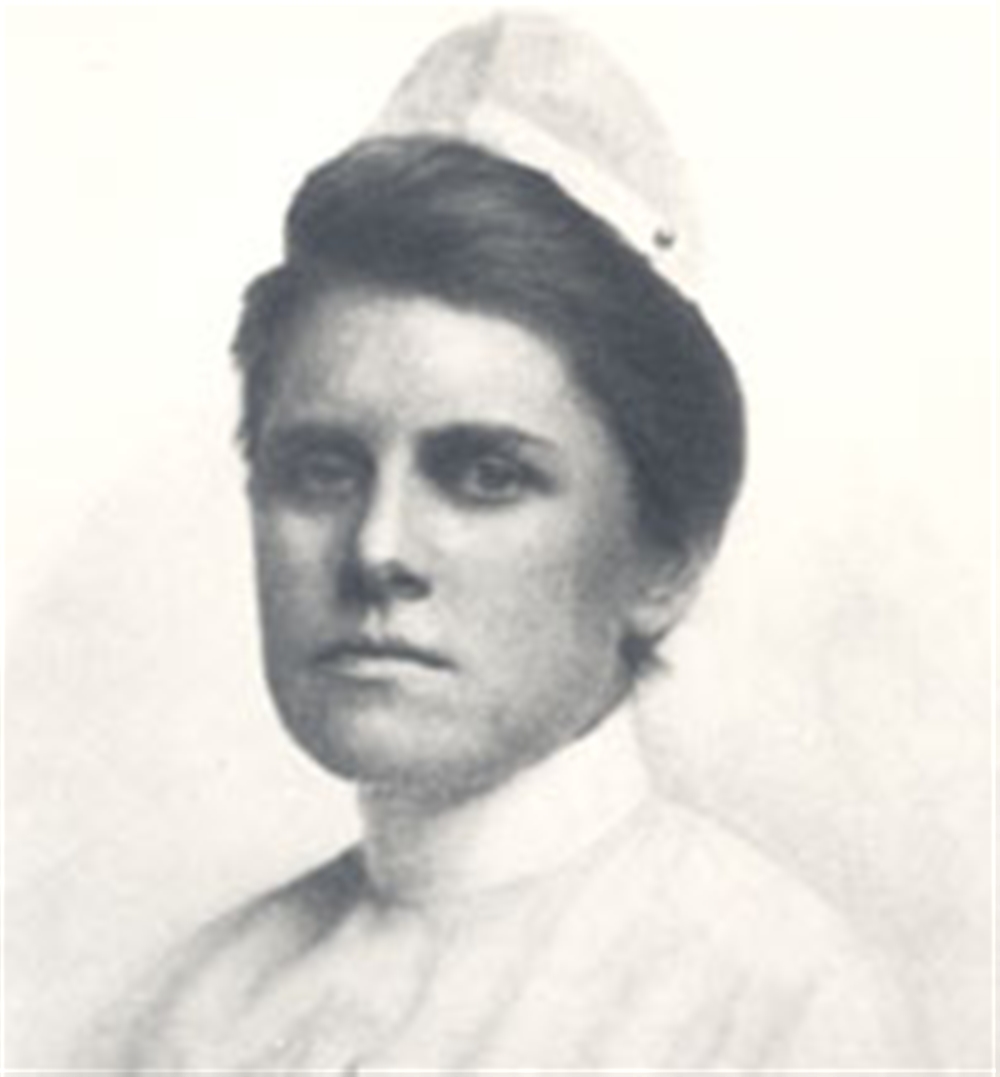 Volume XIV: Medical Aspects of Gas Warfare describes the types of poison gases used in the war, how to protect against them, and how to treat gas casualties. The latter focuses on the physiological actions from different types of gas, their symptoms, and a range of treatments found to be effective.

Volume XV: Statistics is published in two parts: Part One is Army Anthropology and Part Two is Medical and Casualty Statistics. Part One’s sections focus on anthropometric data collected such as physical measurements, hair and eye color, and specific diseases and defects. Part Two’s sections describe the total number of men in the army, data on the sick and wounded, and over one-hundred tables summarizing the data collected.

Image of Adjusting and improved splint: Volume VIII: Field Operations, The Medical Department of the United States Army in the World War (Washington, 1925)